We wanted to get out for a ride, somewhere out of the valley. I agreed to, or maybe even suggested, adding on Lusk Pass to the JP/Cox ride. It would make it a little longer and would mean we wouldn’t have to drive all the way over.

And sure, I’d heard Lusk Pass wasn’t a great route, and best used as a connector if you needed it, and not worth riding more than once. Â But I didn’t know. I just didn’t realise! How could I have known?

It was worse because I was riding a borrowed bike. A borrowed bike that’s great for riding down hills, but an absolute pig for riding uphill. I’ve never been so close to stopping and hurling a bike into the bushes as I was on that ride. Between the steep, hideous, washed out rocky terrain, and the deadfall, and the vegetation overhanging the trail – it was just beastly.

So we climbed directly up to the Jumpingpound summit rather than riding down to the south end. And that climb was a breeze in comparison toÂ Lusk Pass. 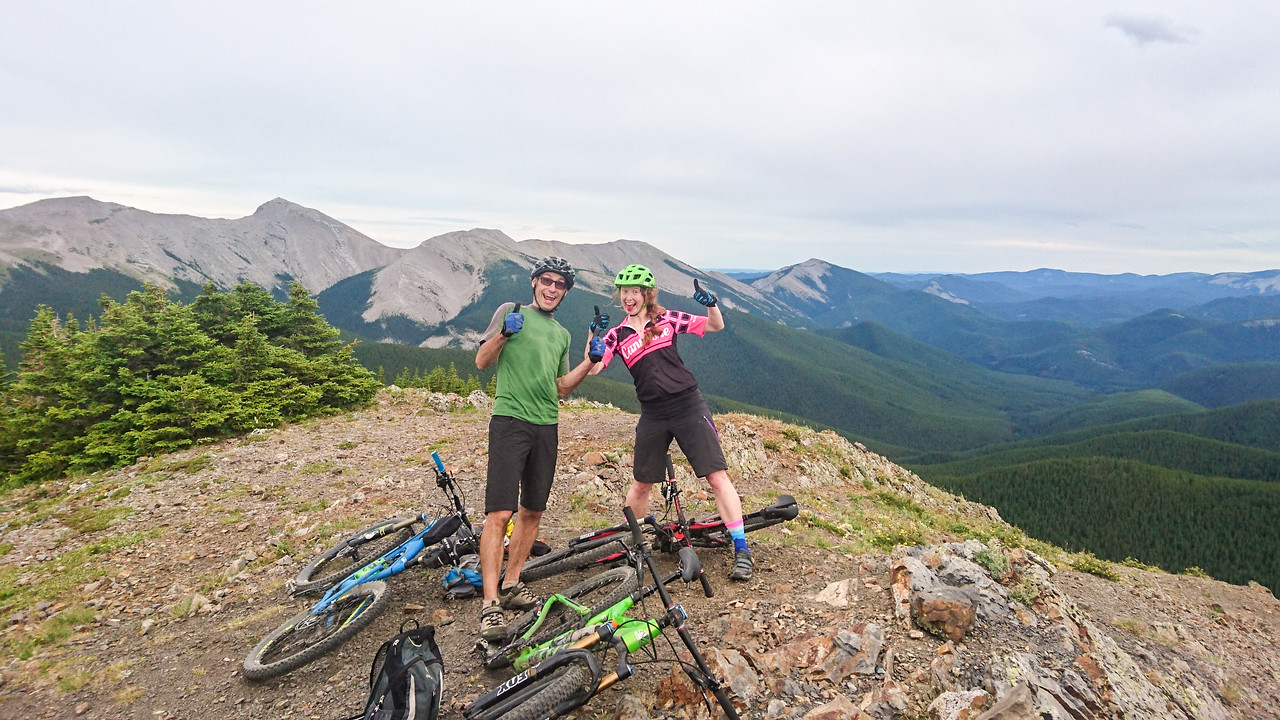 So we were at the summit taking stupid photos in no time. Here’s me filled with joy at having finished most of the climbing, and having eaten most of the skittles.

Then we started to get moving, over and across to Cox Hill, wishing it wasn’t quite so overcast, but at least there are so mosquitos this year. 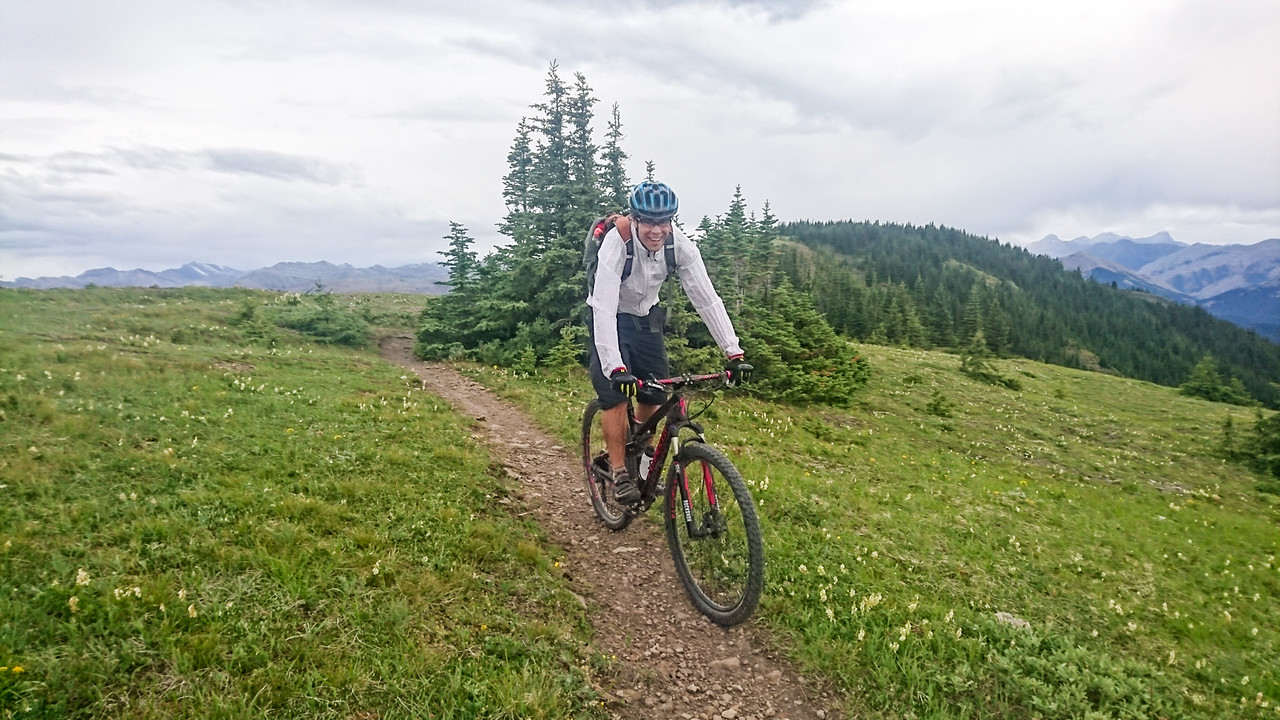 The descent down Cox Hill was fantastic fun on the big bike. Not so much fun that I’d ride it over Lusk Pass again though.

We ended up taking the road back to theÂ car. Because we’re not complete maniacs, and kind of wanted to make it back there before sunset. Which we accomplished. Just.

Why do Granfondos have to start so early in the morning? I’d scored a free entry into the Highwood Pass Granfondo, but was debating whether I really wanted to get out of bed that early so I could go ride in the rain. But who was I kidding, of course I did.

Allan, Greg and I had planned to ride together. Kicking off at the start, we ended up in a big group of riders that just got bigger. By the time the first aid station came along, we were relieved to have an excuse to stop – one or two of the riders obviously didn’t have much experience riding in a group.

After losing our big peloton, weÂ made it most of the rest of the way to the top on our own. Once we hit the last couple ofÂ kilometres I decided I may as well see just how fast I could ride the final section, and started hammering to the top on my own. Fun!

Once I got to the top I snacked, waited for the guys, and then we started to head back downhill. And then the rain joined us.

Here and there we joined forces with other riders, but mostly rode on our own to the finish line.

And then devoured our delicious meal! Transrockies, you guys are the best!

To top things off, I actually won the female hill climb, and scored myself a sweet green polka dot jersey.

This was Finn’s idea, and so we set my mum up on my single speed, and set off to Banff.

The only hitch to the whole ride was when we tried to catch the bus back to Canmore from Banff. The driver was strictly enforcing the number of bikes permitted on the bus, despite the fact the bus was far from full, with a good queue of folks with bikes trying to get on. After missing the first one, we cunningly made our way over to the first bus stop in town, and the driver reluctantly let us on thisÂ time around.

Another Canmore experience in the bag for mum.

The last time we tried this was June 20, 2015. It was at Finn’s suggestion back then, and that was how it happened this time around too. We were tossing up ideas about where to hike when he declared he wanted to ride to Banff to get icecream. Ok!

Back then he was on 14″ wheels, his Spawn Gremlin (the equivalent of the Spawn Furi these days). It’s a great little bike. But now he’s upgraded to the Spawn Savage 1.0, with 20″ wheels, gears, no suspension, nice and light. He’s working on trying to change the gears while riding, but that’s still a bit too tricky for him – instead he stops, and I help him.

We hit the road, and it was far easier than it used to be. The big wheels spin so much faster. A picnic and lego break at the Valleyview picnic area was our only stop, aside from that we just kept churning along. We rode and chatted, and he yelled at me when I tried to sing. The 25km took just three hours, which knocks an hour off his previous time. Ah, what fun to be able to ride together.

And shockingly, the whole thing finished up with icecream.

We set out for a bike ride together, the Moosling and I. I was thinking we’d head out along the Legacy Trail for a few kilometres and then turn back again. The longest ride he’d done on his own bike was just 6km or so. But once we started riding towards Banff, he was pretty adamant that he was going to ride the whole way there. We’d done it with him on the trail-a-bike plenty of times. And at least one of those times he’d been pedalling pretty much the whole way. I was a little short on snacks, but I figured we may as well ride half way and then see how we were going. The other concern was weather – it’s been typical June in the mountains weather recently. Unsettled, with random bouts of rain or thunderstorms. We had shell jackets, but not full rain gear, not enough to make it pleasant riding for the length of time it would take us to get to any place dry if there was torrential rain while one of us was riding a tiny bike with 14″ wheels.

But we got to the Valley View picnic area, the trusty half-way point with the red chairs, and he barely wanted to stop. There was a brief snack break, then he was back on the trail and yelling out at me to come on. The boy is fond of Banff.

He spent a lot of time trying to run over the plants on the side of the trail on the second half of the journey, and frequently coming to a stop after miss-steering at super low speeds. He was also getting quite sick of my reminders to keep right, and started yelling at me whenever I mentioned it. While still tending to waver over into the left half of the trail.

We got through it all with increased levels of singing, and he sped up as we rounded the corner and started to draw closer to Banff. And started to yell out “I’m really excited Mama!” and bouncing up and down on his bike. We pulled in at the Wildflour Bakery just under four hours and twenty five kilometres after setting out from home.

He was filled with joy at the prospect of banana-chocolate muffin, toasted cheese sandwiches and frozen yoghurt (that I told him was icecream, shhh). And was perfectly happy to keep riding around Banff – I think he may have also been ok with riding back home again, but we got a lift back home again instead of pushing our luck.

In the words of the hero of the story, while headbanging in the waffle shop to the tunes of Tina Turner’s ‘We Don’t Need Another Hero’: “Mama, this song is making me eat!” … and he hasn’t stopped eating since we got back home.

Now the boy is big enough to big enough to be pedalling we’ve sold off the bike towing devices, and he’s only ever on the trail-a-bike if we get out on long rides together.

Sadly though, the trail-a-bike we have really doesn’t handle offroad trails that well (at least not the rough rocky rooty ones around here). We’re still torn about what to do as a solution – Tout Terrain make a gorgeous trail-a-bike with suspension, but it also costs close to $2000.

In the meantime, the boy really enjoys riding the trail to Banff, and has taken to suggesting it often (could it be because he gets icecream if we go there?) (and I tend to agree because I know we’ll go to the Wildflour Bakery).

And he’s actually pedalling these days. At least occasionally. Which is helpful when you’re trying to haul a 12kg bike plus however many kilograms of small boy up a hill.

Mostly he just pedals when he really wants to get to icecream or a toy store though, and isn’t convinced he needs to help me pedal into the brutal headwinds that tend to lurk on the route to Banff. We had our last adventure with Al and Lincoln on a ride to Banff and back – they’ve now disappeared back to Australia, and we have lost some good quality adventuring partners. Sad faces all round.

Probably my last ride along the Legacy Trail before the weather turns and covers it with just enough snow to make it un-rideable, but probably not enough to make skiing the whole thing a fun idea (I have dreams of them grooming it for skate-skiing, that would be just awesome.