Wednesday was a chance to revisit my childhood of stomping about in the Grampians. Well, not exactly all of my childhood, butÂ rather someÂ highly valued andÂ infrequent childhood trips to the Grampians.Â Trips that instilled a love of rock hopping, scrambling about on rocks, and getting to the top of mountains – Â which my parents may have come to regret as I took to rock climbing and then disappeared to live in the Canadian Rockies. 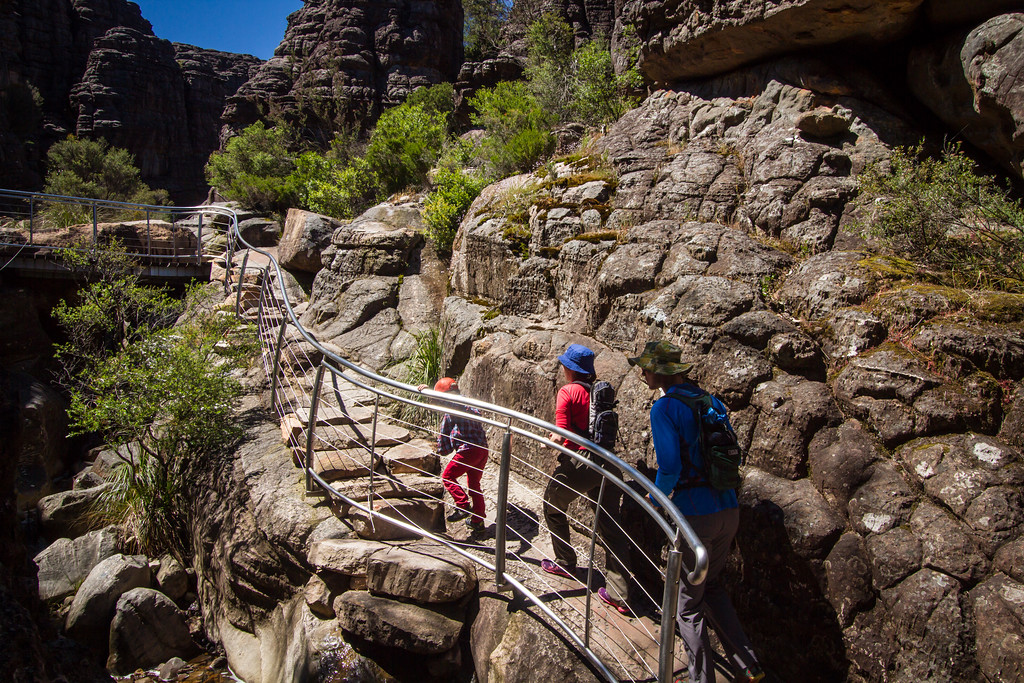 We went to hike up the Pinnacle, overlooking Halls Gap – I had distant memories of it being fun, and involving plenty ofÂ rock hopping. I was right! 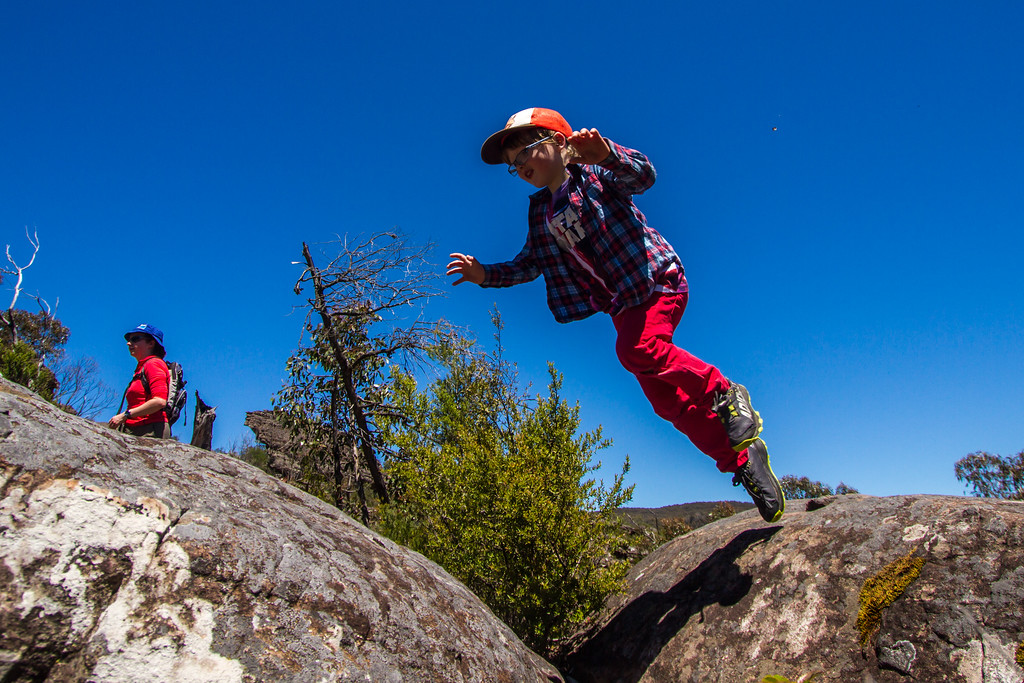 It was a warm day (by Canadian standards anyway) (actually, by Australian standards too judging by the state of some of the other people out hiking). Al and Lincoln joined us hiking, while Brendan was off on a gravel grinding loop through the Grampians. 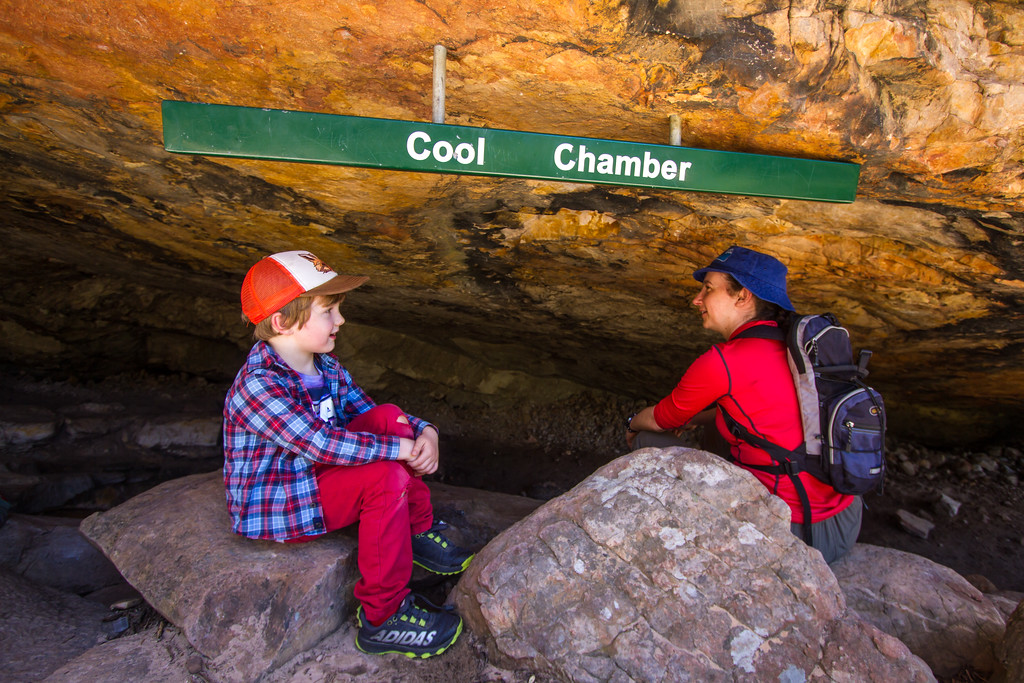 The rocks were numerous, and highly hoppable – Finn took to it all with great pleasure. We explored in two caves, and stuck our head in a waterfall – all helpful to cool down. The details of Alex’s heritage as a cave dweller were exploredÂ more thoroughly (apparently this all started while they were climbing at Bushranger’s Bluff), as we explained to Finn that one of these caves was where Papa had grown up. 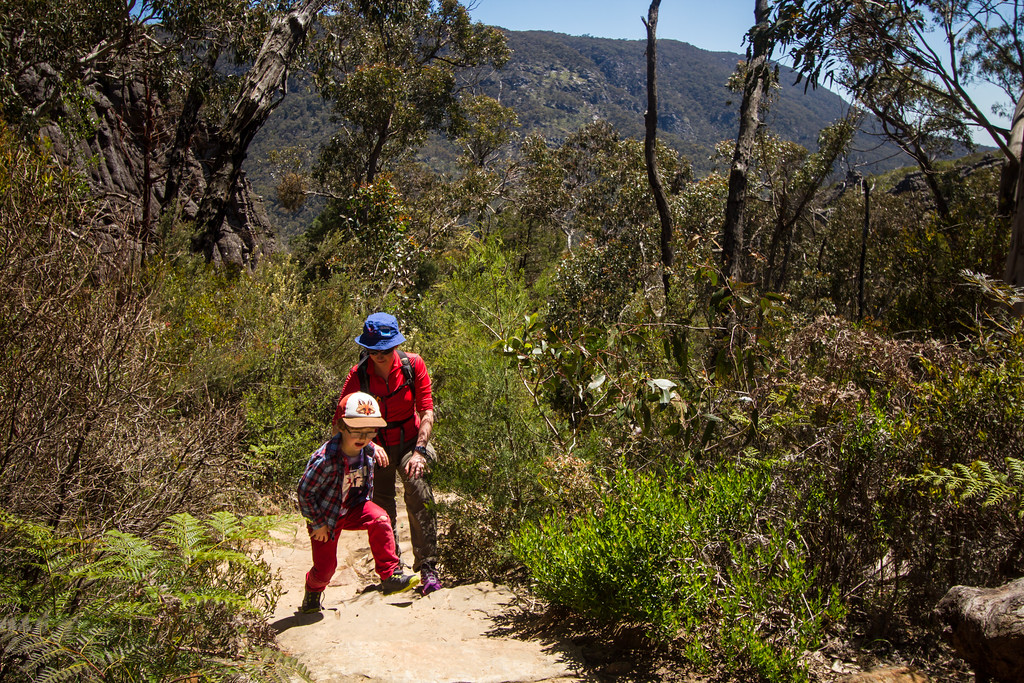 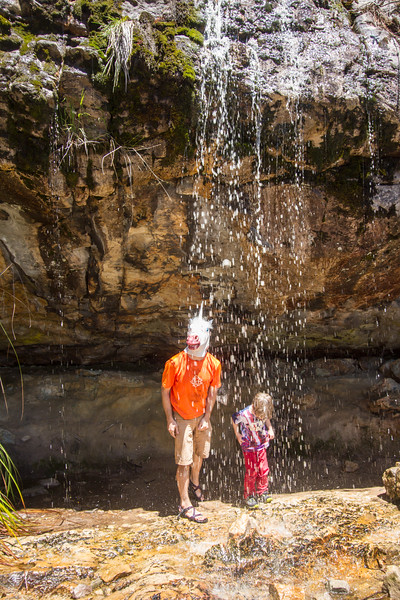 At the summit we found a pet cicada, then it was eaten by a crow, and a harsh life lesson was learned by all.

WeÂ even went and tried the nerve test, and discovered that we have no nerves, and were totally fine with that. 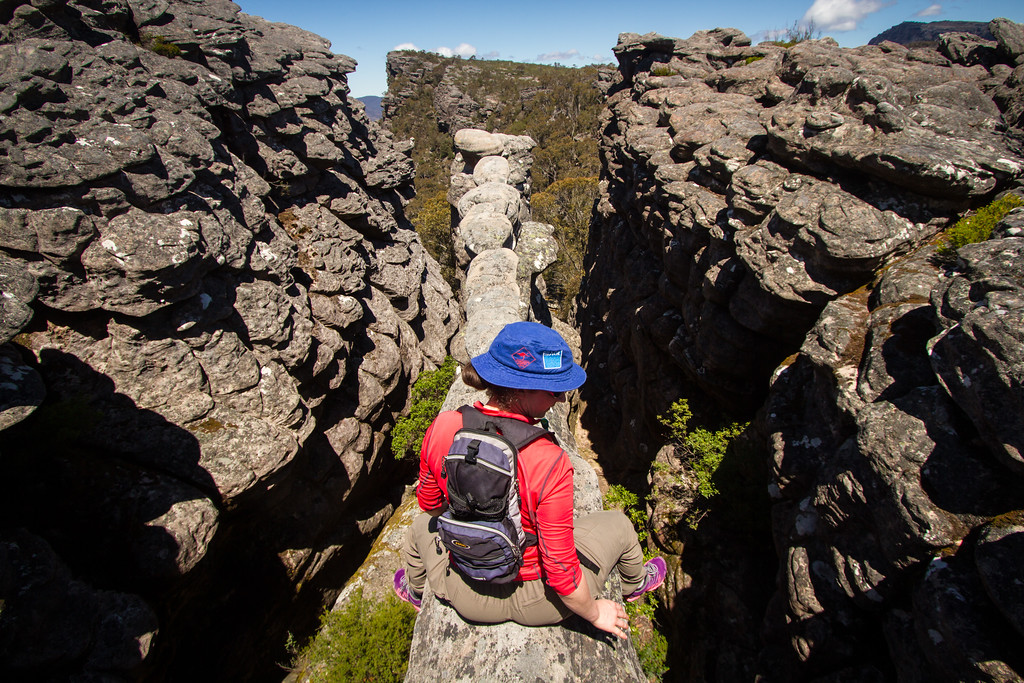 Then back down to the carpark, and it was time forÂ icecream for all in Halls Gap! 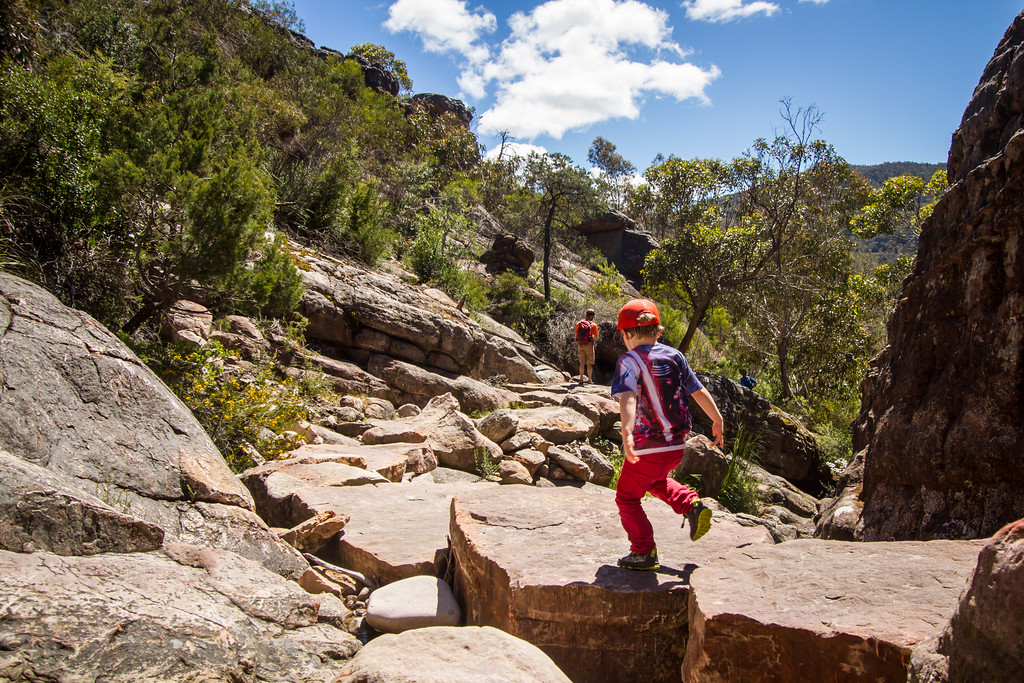 Thursday brought a pleasantly relaxing morning, followed by some relaxing climbing in the shade with Cath and Adam. I even got to frolic through a field of daisies on one of the climbs! All of the rain has done wonders for some of the cliff vegetation. 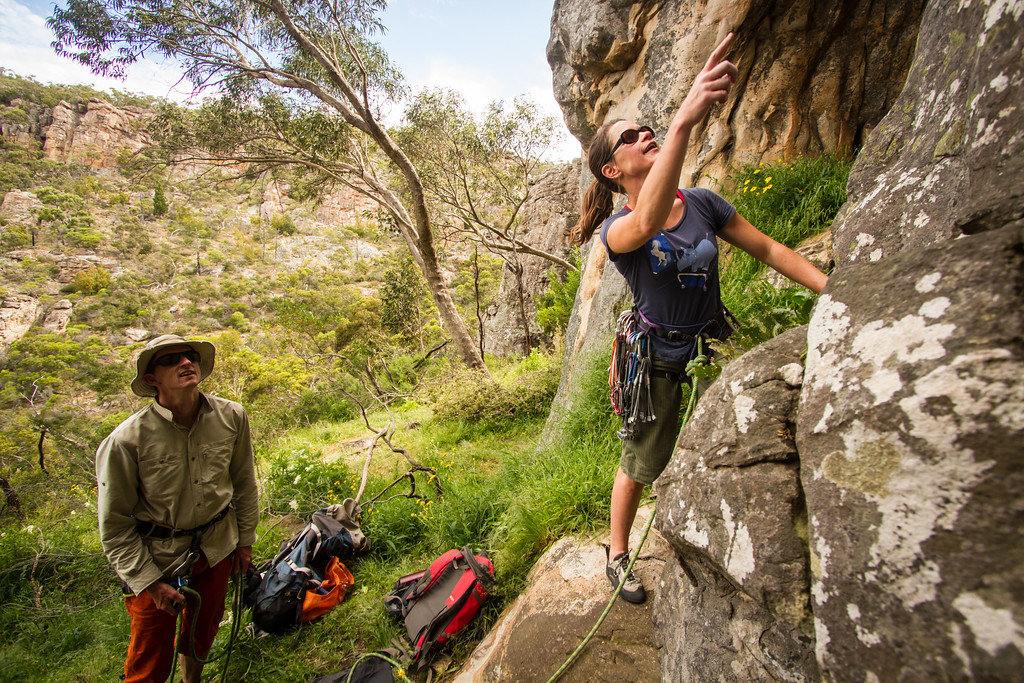 Smudge wasn’t a fan of the unicorn, but was a fan of trying to devour things that anyone is holding, even if they are a unicorn.

Lured out to ride a bike one more time (it’s notoriously difficult to get me to go for a ride, it tends to be as difficult as just suggesting one), I rode up to the summit of Arapiles with Brendan once again. When there’s nothing but plains all around, it’s far and away the most obvious spot to go – and has the added benefit that you can actually see the sunset!

Sundowner beer successfully drunk (dranken? drinked?), it was back to Andy’s to catch the tail end of roast dinner and more catching up with Brett and Sair who had arrived that afternoon.

Friday morning we all hit the Organ Pipes, now climbing with Sair for the first time in absolutely years. 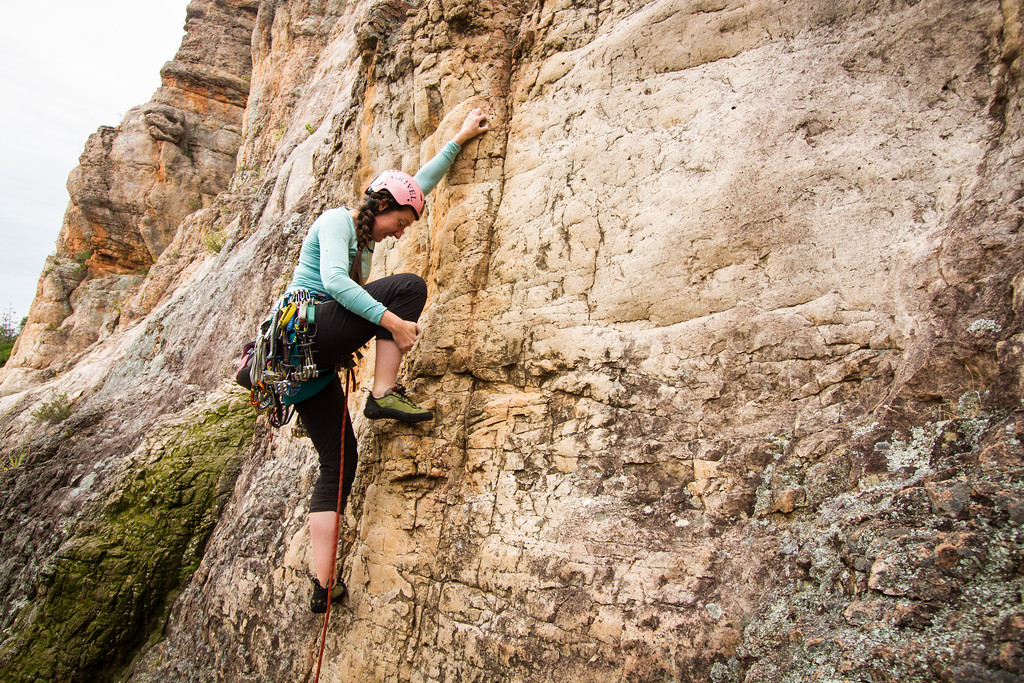 Fun climbing times done, we headed into town to hang out at the cafe (blanket couches!), then it was time for goodbyes. Again. This was the downside of the Australia trip.

The afternoon plan was to go and visit the Little Desert National Park. I was dubious. We arrived in the desert. It was full of trees and plants. I proclaimed that my parent’s farm looks like more of a desert than this. #worstdesertever!

All the recent rain did at least mean there were pretty flowers to look at. However, our attempts at doing the guided desert walk were a bit of a failure – there were lots of numbered posts, and an accompanying informational brochure, but the majorityÂ of theÂ floraÂ of note seemed to have died in the meantime. 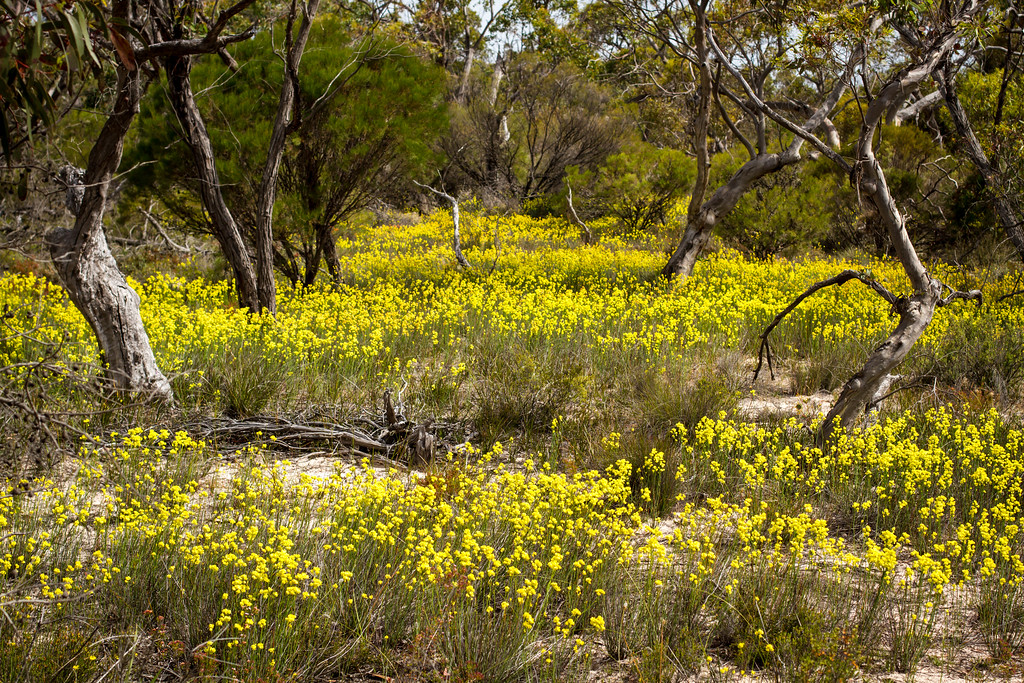 The hand lizard enjoyed making its way around the desert though.

And there’s nothing quite like deserted desert roads for jump shots. And photo bombing apparently.

Saturday brought yet more goodbyes, as the NZ crew disappeared. Cath and I got one more climb in at the Organ Pipes though, so that was lovely. 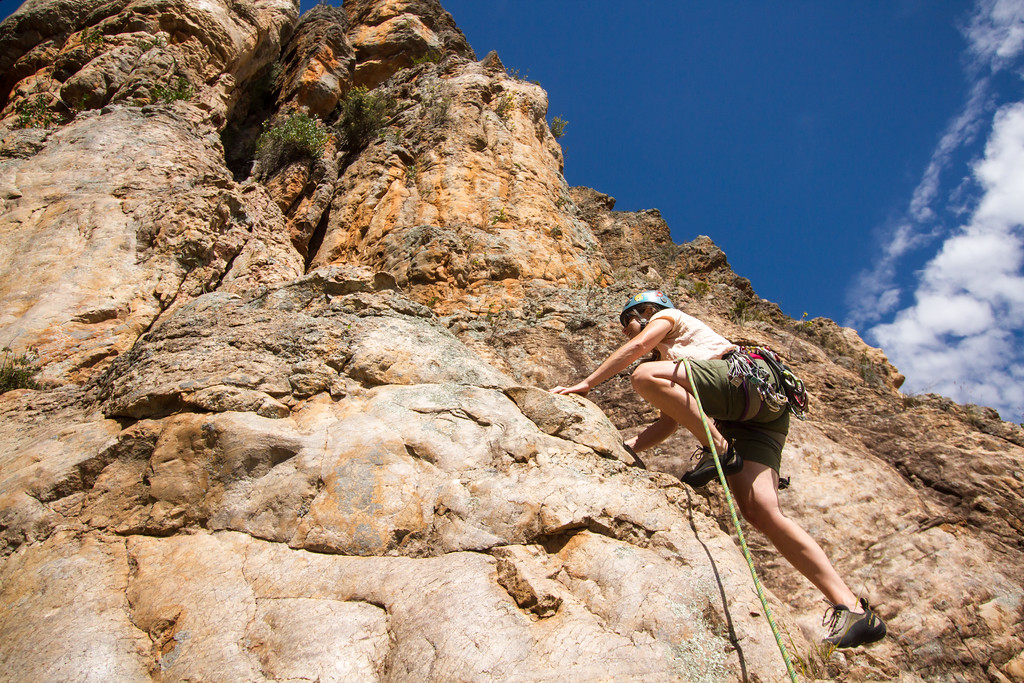 The afternoon was gainfully spent lazing in trees, hiking to the summit of the mount with Al and Lincoln, and sitting about in the Horsham pool. And catching a Snorlax – there was a lot of Pokemon catching on this trip.

Then it was Sunday, and time to leave. But not before a final bike ride to the summit! Â Andy and I rode together until we hit the Arapiles road, then he sent me off to sprint to the summit, which I had great fun doing, thoroughly exhausting myself (and getting a couple of QOMs, woo). 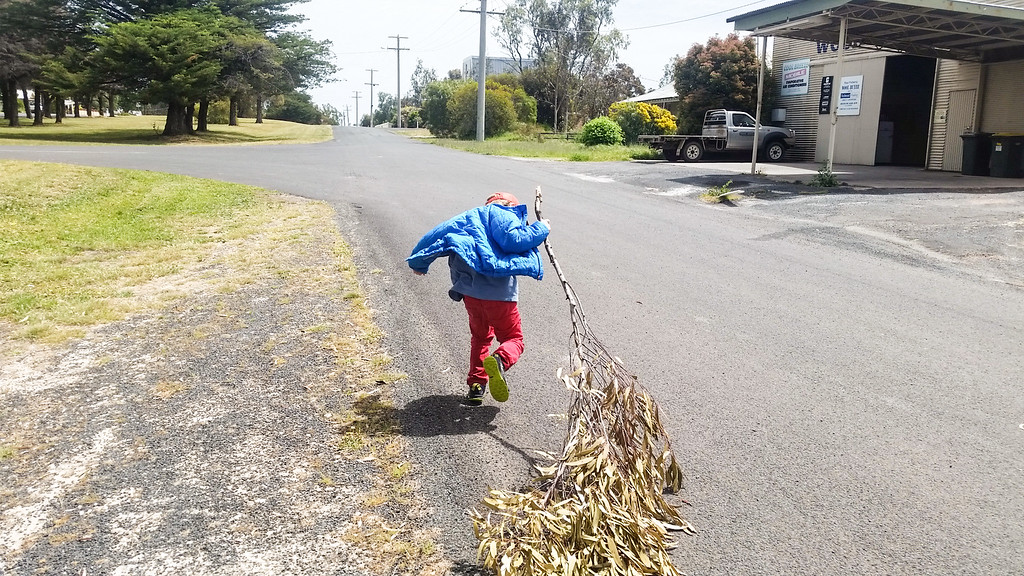 Final Arapiles farewells were said to Al and Lincoln, and then to Andy, Ying and Smudge, who we’d been staying with for the past week (and had loaned bikes, and entertained the Moosling with an endlessly fascinating collection of Lego Technic creations). 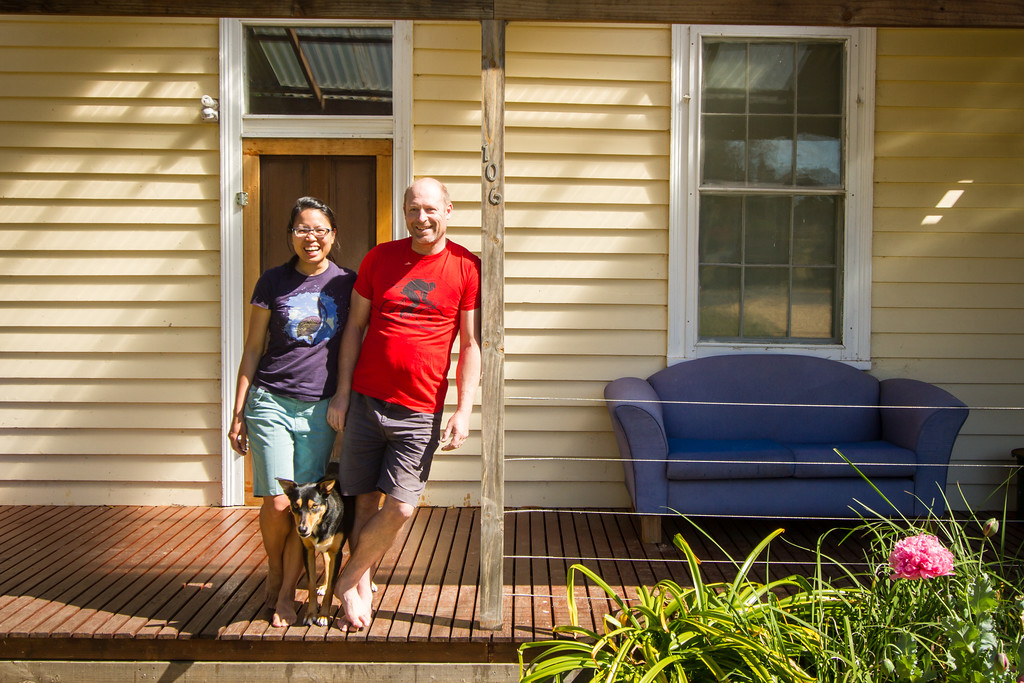 And so, onwards, with just one week left in Australia, the van hit the road once again.

Many moons ago I was 34 weeks pregnant and hiked from Sunshine Meadows through to Mount Assiniboine and out to Mount Shark in three days. It was wonderful, although getting in and out of a tent was challenging, and on the last day my feet were so swollen I had to hike in sandals instead of hiking boots.

This time around we decided to see if we could make it more challenging by taking a 3Â¾ year old boy with us, and try and convince him to walk the whole way under his own steam. Because he really is getting too heavy to carry.

Fifteen kilometres per day over four days… what could possibly go wrong?

The forecast was for gorgeously sunny warm weather for the next four days. As we started out around 8.30am, it was already terribly pleasant out.

We climbed up the enormous hill from Sunshine Village up to the Meadows (disclaimer – hill not actually enormous, just tends to feel that way). And then spent some time loitering by Rock Isle Lake and waiting for the rest of the group to catch up. Which they did! Before we had been eaten by mosquitos. But that kind of set the tone for the rest of the trip. There are some very well fed mosquitos out along that trail.

Soon after we hit our only patches of snow, just before Lake Howard Douglas. It was the cause for much joy and throwing of snowballs. And then the descent to the Lake. And look, we’re nearly at Citadel Pass aren’t we? Getting from Lake Howard Douglas to Citadel Pass at small child pace takes a bit longer than one would expect though. This was another theme for the trip – readjusting expectations so that 2km/hour seemed like a pretty good pace.

Thankfully a dinosaur turned up to chase the small child most of the way to Citadel Pass. It took to hiding behind trees, and in dinosaur holes, and then leaping out at the small child. Yes, this is a valid motivational tactic. Shhh.

Above is a photo of small child hiding from incoming dinosaur, and below a fearful child running for his life as a slightly apathetic dinosaur pursues him.

Finally we made it to the Pass for a late lunch, only arriving a little later than the rest of the group. And there was much lazing around and swigging of champagne to forestall the effects of mountain lassitude. Meanwhile Mount Assiniboine hovered pointily in the background. The descent to Porcupine Campground starts off beautifully, but then seems to keep going forever and ever until you’re sure you must be dropping into the very bowels of the earth itself in some kind of Verneian nightmare. But then you end up in a nice little busy valley with a freezing cold stream, and quite a few other campers.

It was much quieter last time we stayed here, but that may have been because camping fees were still charged then, these days it’s officially free to camp at Porcupine, which is a pretty nice deal.

So the small child spent time throwing rocks in a stream, and then frolicking in a mesh tent with the even smaller child, while the large people made food, erected tents, collected water and killed tigers.

And eventually they all went to bed, and were mightily relieved that mosquitos are kept at bay by tents.

“Do you wanna go skiing?”
“Yeah, ok.”
“How about Mount Shark?”
“Yep, sounds good.”
…..
“The road over Whiteman’s Gap keeps being closed due to avalanche.”
“And it sounds like the trails will be bullet-proof anyway.”
“Yeah, lets not go skiing there.”
“I’d still like to get out and do something.”
“Yeah.”
“How about we go for a hike?”

And so we hiked up Lady Mac. The trail was actually dry or just a bit muddy for maybe 10-20% of the way. Then there was just a lot of packed snow. Which got less and less packed as we got higher. We stopped at the teahouse for a quick bite to eat (the Moosling had a suck on a vegemite sandwich and a banana), then fled the horrible wind, and did some good butt-sliding on the way down. The butt-sliding was the main reason I kept carrying the Moosling on my front, as I’d have much preferred the weight on my back. Photos from Kristy (because I forgot my camera!!) Park in the Goat Creek carpark, up above Canmore along the Spray Lakes Road. Walk up the hill opposite the carpark, over the bridge, past the trail up to Ha Ling, then along the road next to the canal for twenty minutes. Walk past rock cuts. See inukshuk and flagging in trees and follow faint path with more flagging up into the forest. Reach drainage, do not cross it (unless you wish to try failing to hike up South Lawrence Grassi). Follow along it for a hundred metres of so then head back up left into the trees, steeply. And more steeply. Hit a few snow patches. Breaking onto the scree slope

Keep going up the ridge as it narrows, and narrows and narrows. Scramble over some dragon’s back ridge formations. Slide around on the snow a bit. Spot the summit cairn off in the distance.

Get scared when the ridge starts getting steeper and narrower, and the cliff-type drop-offs get closer and closer, and amounts of scree and snow surface underfoot remain consistently high, and the weather is closing in and looking cloudy, and it starts to snow on you a bit, and you realise you didn’t tell anyone where you were going because it was just an afternoon hike. Looking back down the ridge

Turn around and go back down. Justify your decision as thoroughly sensible all the way down. Glare at the sky that turns nice and blue and sunny.

Where we have the Larch Pilgrimage from Moraine Lake (in the Valley of the Ten Peaks), up to the Larch Valley and Sentinel Pass. I found out afterwards that this is some sort of Rocky Mountains tourist mecca â€“ well, more accurately I found out as we were walking, and there were all these other people walking next to us.

“What are you all doing here?” I asked.

“This is a nice hike,” I said, “but I’ve done many others that were also nice, and no-one else was doing them.”

“It’s written up!” they said “in the guide books and on the internet”.

I did see a larch. Several in fact.