A week long get away to ride bikes in Squamish, where the trails are many and the nachos are delicious (well, at least the nachos we were making for ourselves in our vacation rental were absolutely wonderful).

After riding in Kamloops on the way over, we started to hit up some of the local Squamish trails. 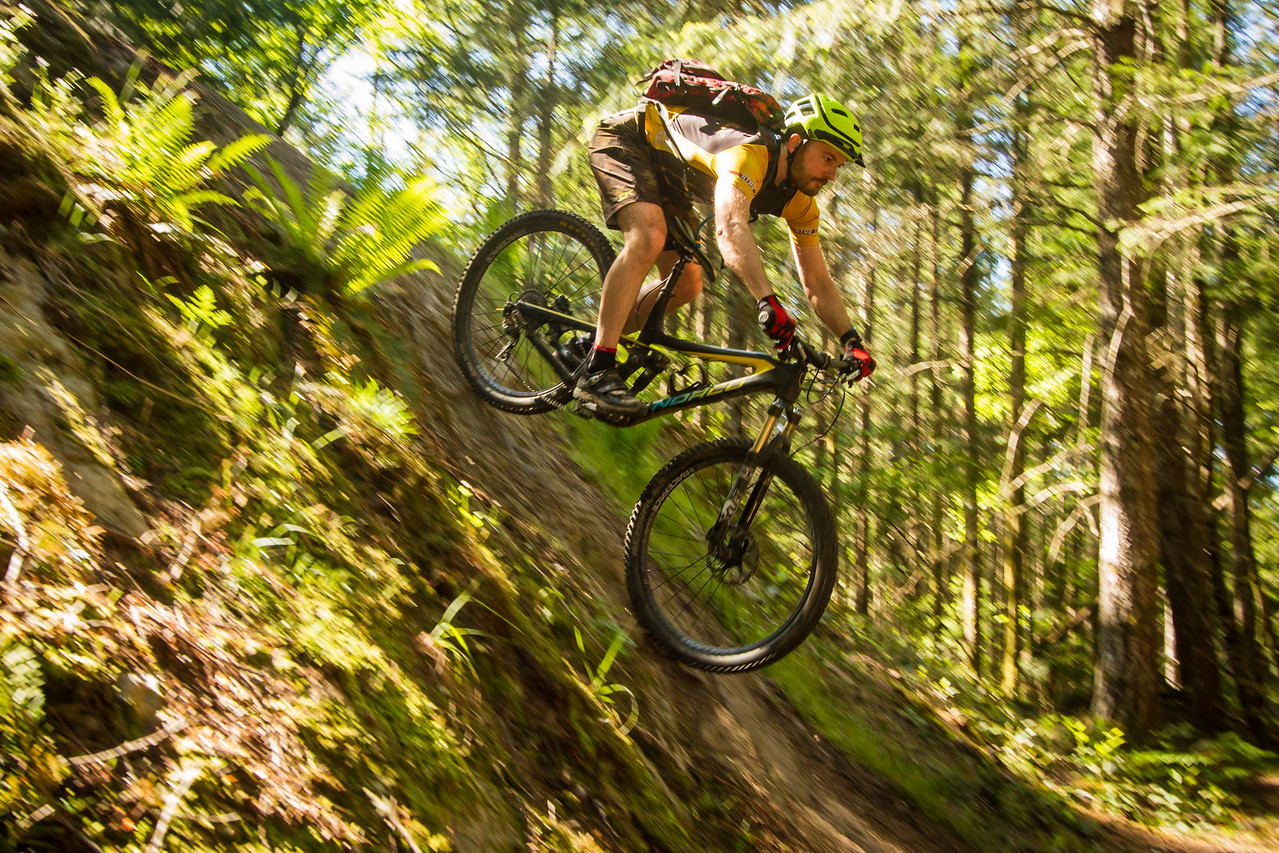 Sadly I wasn’t feeling super great all week – still recovering from being sick, maybe low on iron? Who knows. But everything felt way harder than it should have done. 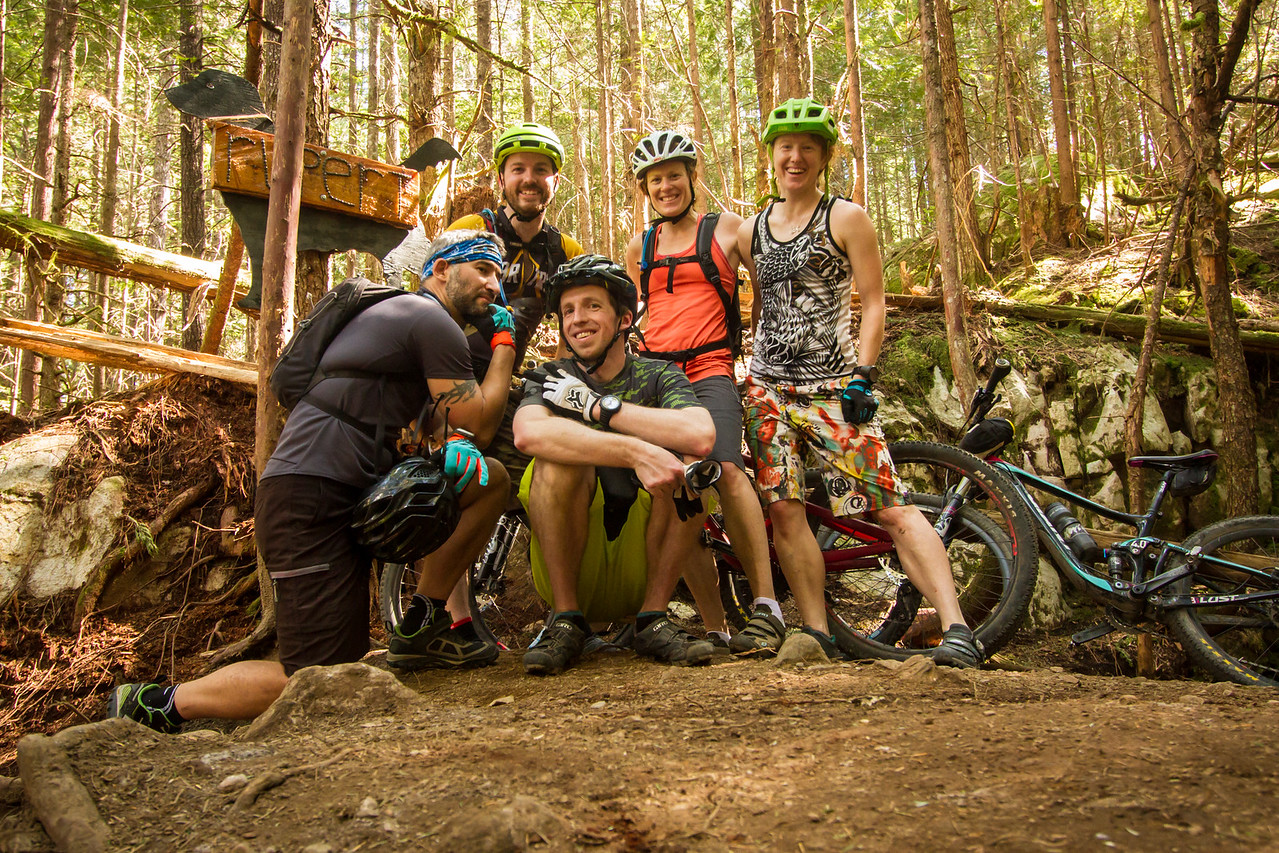 Our only group photo, taken at the top of Rupert. It’s a super fun trail which I would have loved to ride again. One of the sad things about road trips is when you’re so busy trying all the trails you often only ever ride favourite trails the one time.

No-one fell in the swamp.

Or fell down the rocky descents (at least on this day).

Bike maintenance was performed in the yard, and we bled my brakes successfully, hurrah! 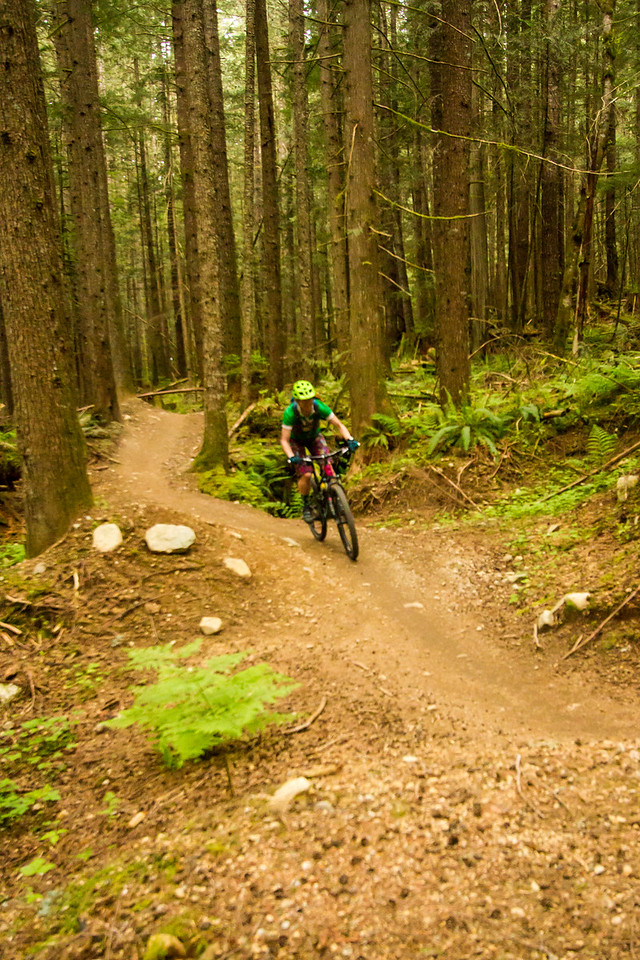 Half Nelson was one trail we did go back and ride a few times. It was nice to relax with some simple flowy fun after some of the more challenging trails.

It was definitely beautiful riding out there though.

And I may have joined an awesome redheaded green-themed sponsored racing team. 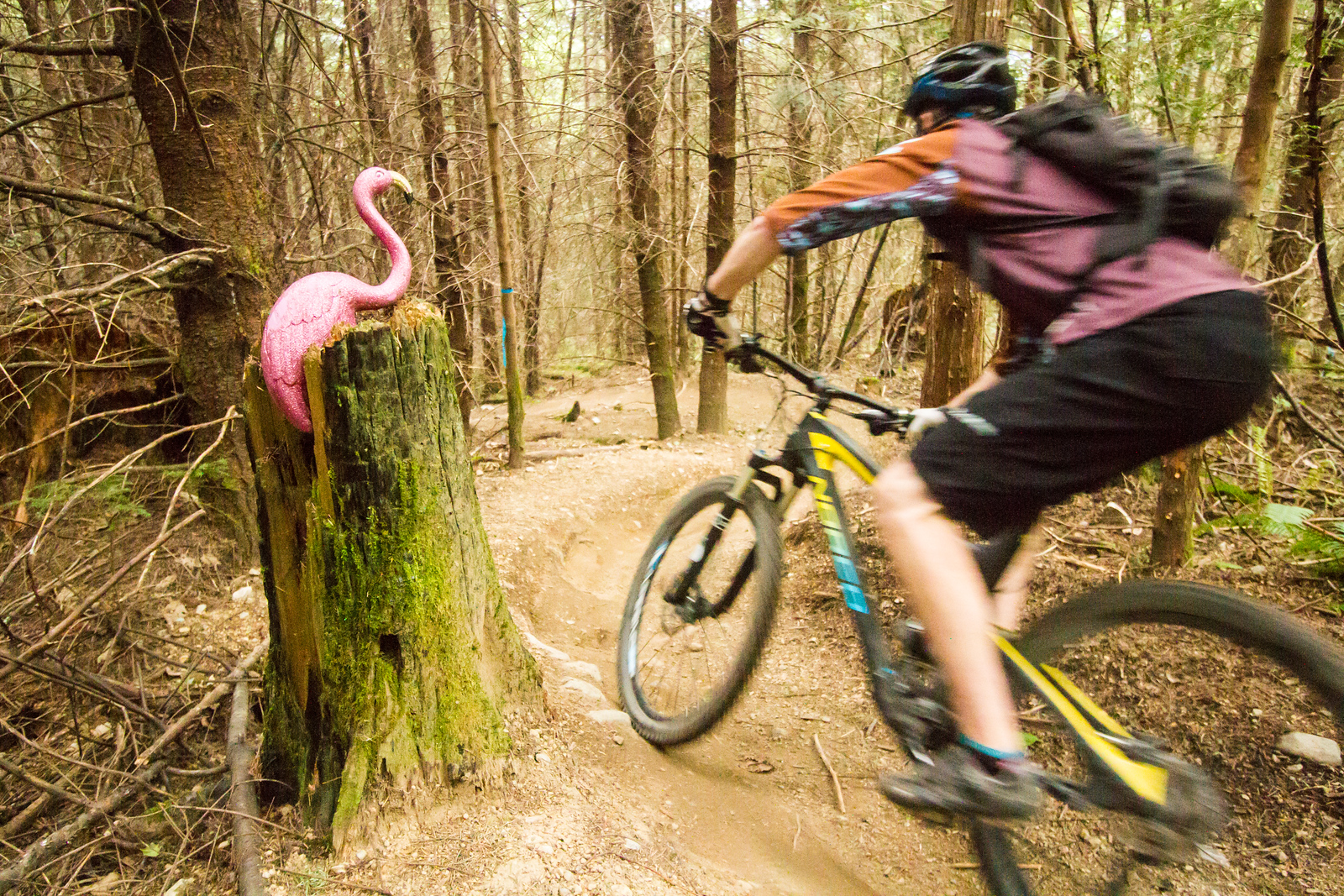 We also headed out to Pemberton for a day. Views were spectacular, but we weren’t won over. Maybe we just needed a rest day. 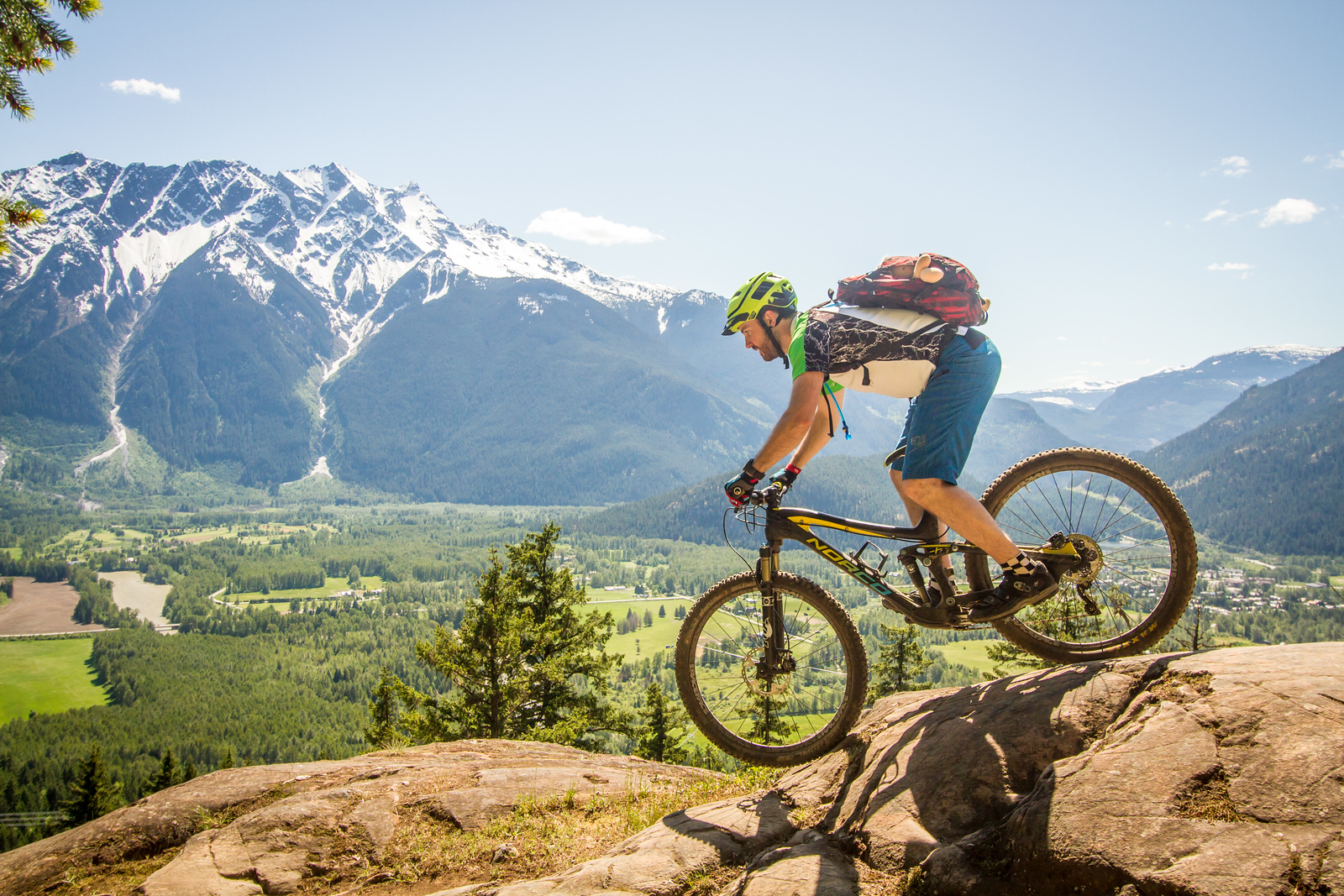 Last day had us back in Squamish. A couple of us decided to ride up to Elfin Lakes, on the basis of not looking at the trail report and assuming because it was warm there would be no snow. There was no snow for a few kilometres, then there was more and more snow.

Because we’re both stubborn, we kept going, even though there was no way the snow would clear as we got higher into the alpine. On the plus side, surfing your bike downhill through snow is actually pretty fun. Then it was a long descent on some terrible (Powersmart) and some great (Fred, Half Nelson) trails, to give us a 26km day with 900m of elevation gain, that really felt like it was much longer.

The view out to Stawamus Chief from the Spit.

And now looking down to the Chief, Howe Sound and Squamish from another vantage point. Taken on the hiking trail to Elfin Lakes – which is part way to Mt Garibaldi, the ever present mountain which lurks above you as you sit in Squamish town. Unless it’s cloudy. So in other words you may see it once or twice a year.

So now after a week in Squamish (with the bunny feeding, the hiking, the climbing, the squirrels, the chipmunks, the Scattegories, the bath robe parties, the bicycling round town, the Walmart visits, the inaugural Tim Hortons visit, the sitting in traffic on the Sea to Sky because their blasting to widen the road had made large rocks fall of the existing bits of road reducing it to one lane, the wandering around Whistler, the discovery of a very gold and shiny puffy vest in the North Face store, and the complete absence of any bear or cougar sightings) a trip over to Banff on the mighty Greyhound beckons…

A photo from the magical Canadian bunny homeland, where bunnies swarm about your ankles and hop all over you and try and steal your carrots if you’re not holding onto them carefully.

My trip to Canada was notable for its complete lack of mooses. I thought British Columbia would be a hotbed of roadside and campsite moose activity, but it wasn’t to be. I feel cheated. There were quite a few chipmunks however. (The more interaction I have with chipmunks, the more I’m convinced that they’re vaguely evil. They have a tendency to try and stalk you, which is more unnerving than it should be.)

On arriving in Vancouver, we received a rather alarming grilling from the immigration official – it went on from the fairly reasonable ‘So how do you know each other?’ (we met in the training camp) and ‘What are you planning to do while you’re here?’ (capture all of your mooses and train them to do my bidding, so that they may be my minions in my quest for global domination) to ‘So… what sort of knives are you using?! {insert ferocious glare}’ (someone’s been watching Vertical Limit).

I came to the conclusion that Canada was relatively civilised though. They have $1 and $2 coins, their money isn’t all the same colour, it has the queen on it, they can actually spell ‘cheque’, they use metric measurements, and they have Mars bars. Although they still drive on the wrong side of the road.

Squamish is the most fantastic climbing destination. I’m developing an unhealthy enjoyment of crack climbing. And slab climbing (despite the protestations of my climbing partner, Mr. Boer ‘Did I mention I don’t like slab climbing… I can’t do the move even if I use the bolt’ Zhao). The only unfortunate part is that it seems to like raining there. Rather a lot.

Skaha on the other hand, is a less salubrious destination. No snow capped mountains in the background there, although there are lakes and rolling hills. Unfortunately the warmth and lakes brings hoards of tourists in RVs, who fill up the town. The climbing is crimpy, which could be fun if your finger tendons are in full health – but an alarming number of holds sound hollow.

Boer climbing against the backdrop of the Squamish logging

On top of Stawamus Chief

Conclusion – I must go back to Squamish. More photos are up in the gallery here (ok, fine, they’re not all up at the moment, they might be by the end of today).