And so the second day dawned beautifully. 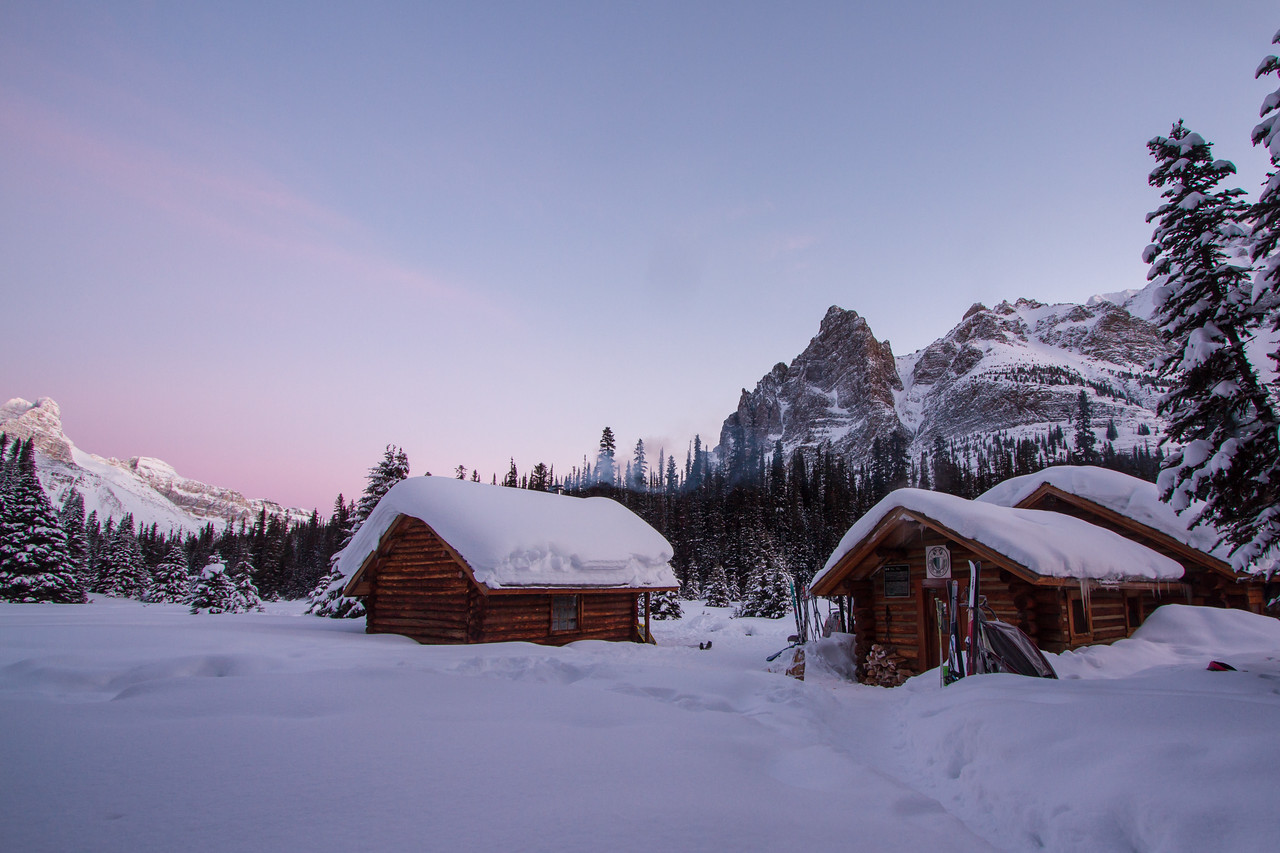 After breakfast, and the requisite sitting about, we decided to get out and build the Epic Toboggan Run. (The Moosling thinks everything is epic these days) 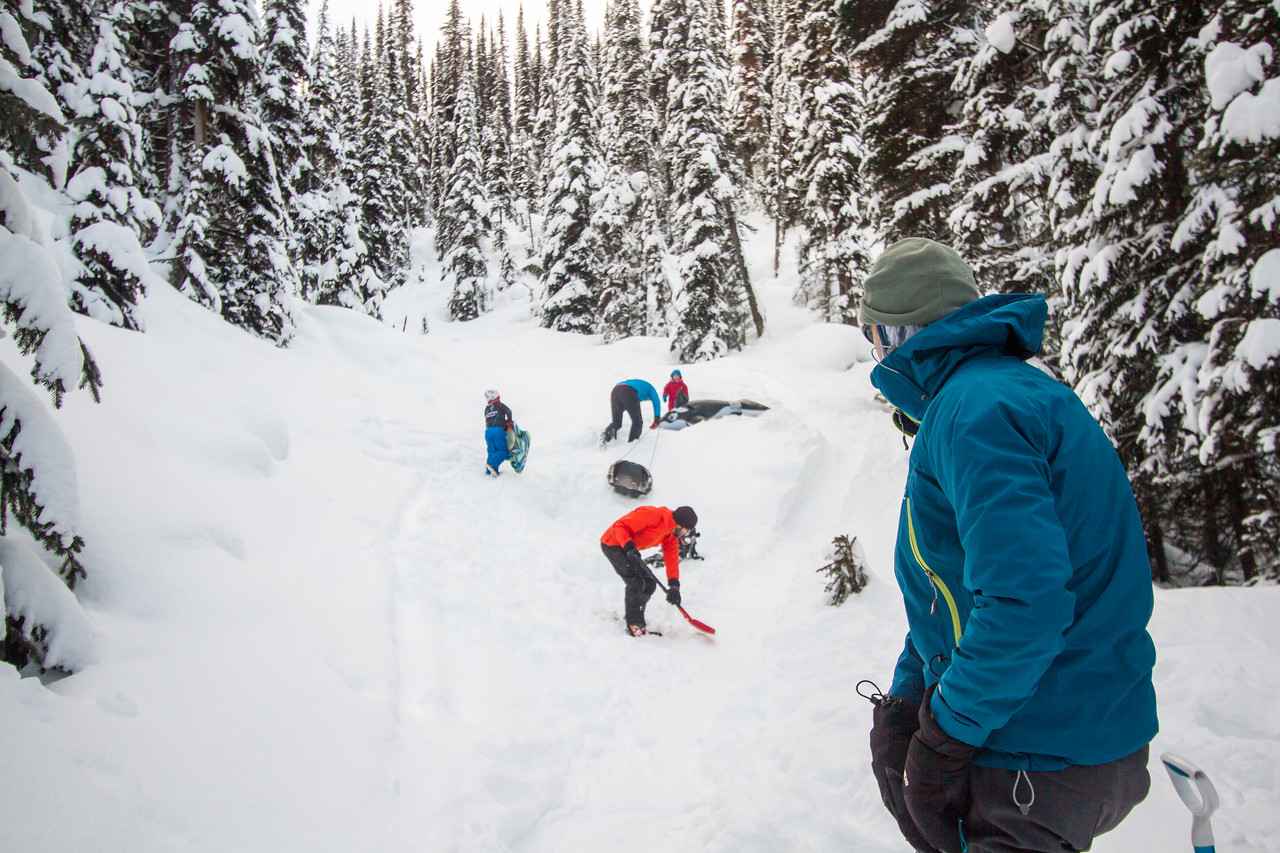 After a fair bit of digging and compaction, we started sending down some sleds. And then a whale, in a short-lived return of alpine whaling.

It turns out whales don’t handle cold temperatures very well, they’re better suited for spring conditions. The toboggan run was a hit otherwise, with constant laps up and down the hill. 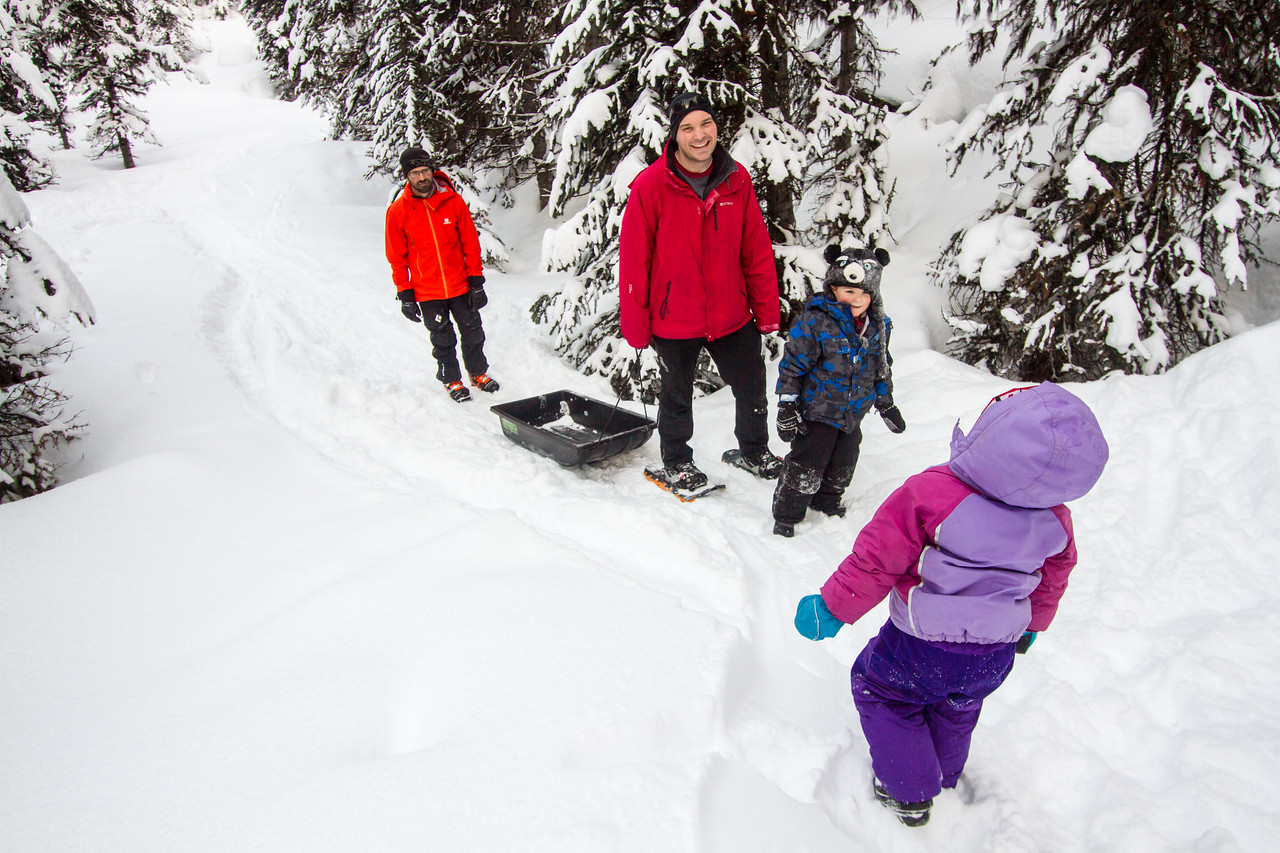 Back in the hut, it was time for snacks, lunch, and hanging out with cute babies. 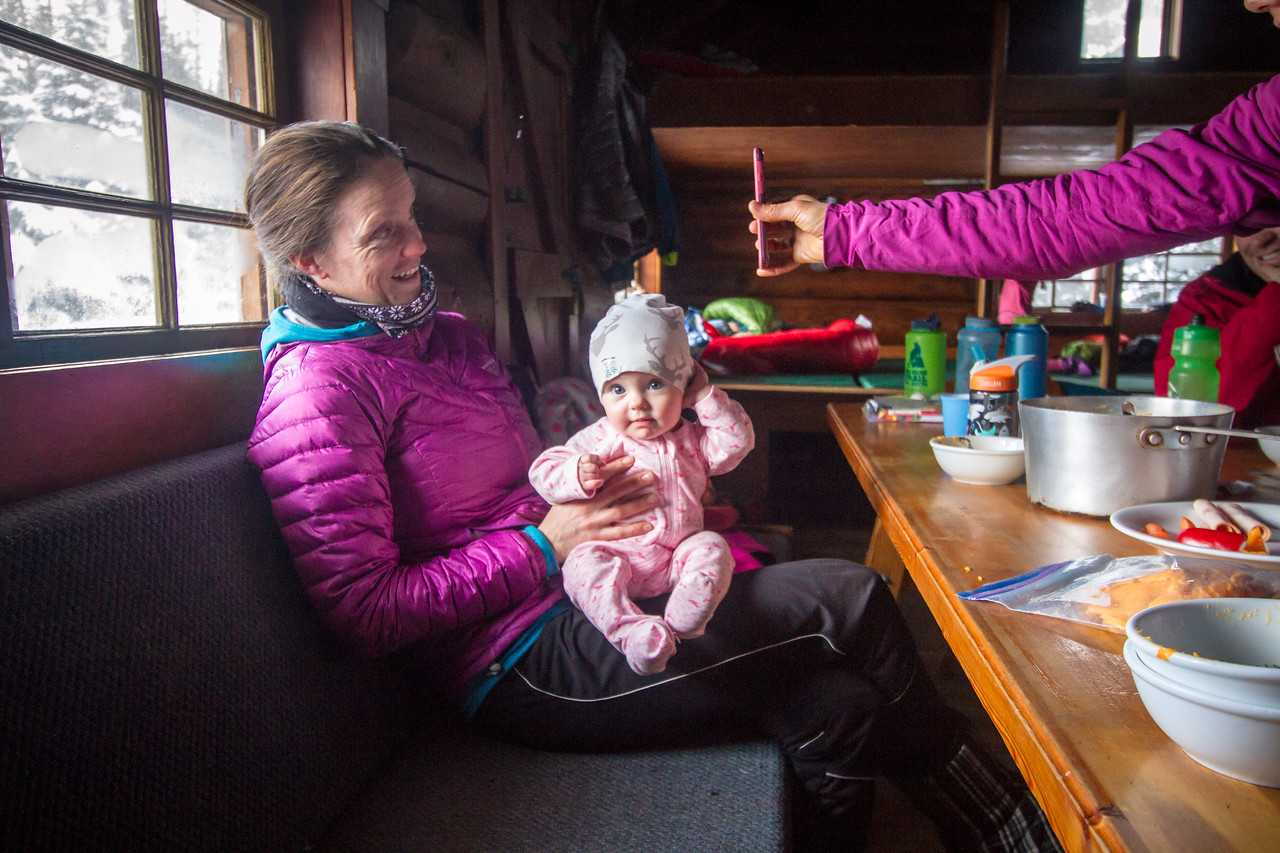 The kids spent some time playing games and reading. 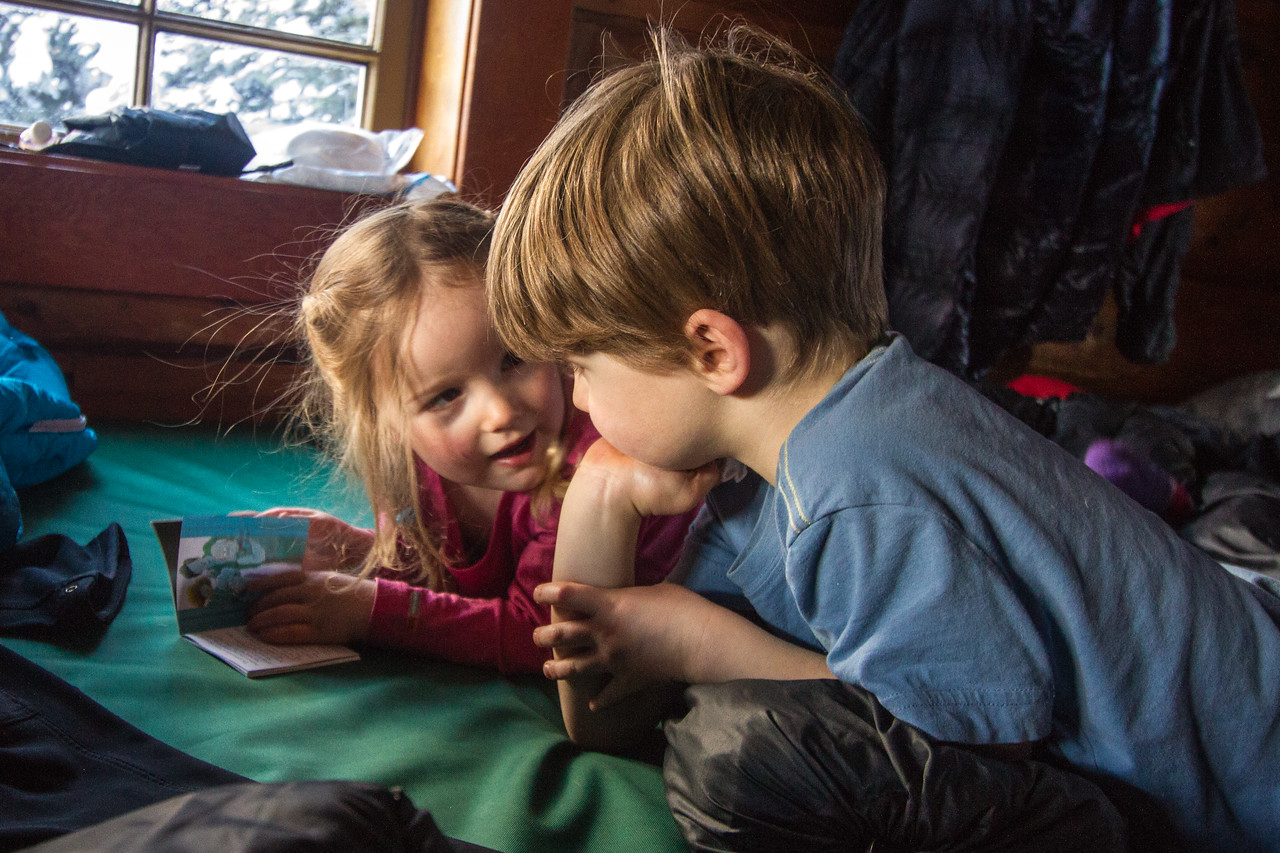 And then a few of us set out for a wee ski tour.

Up behind the hut, and out across the meadows to McArthur Pass. 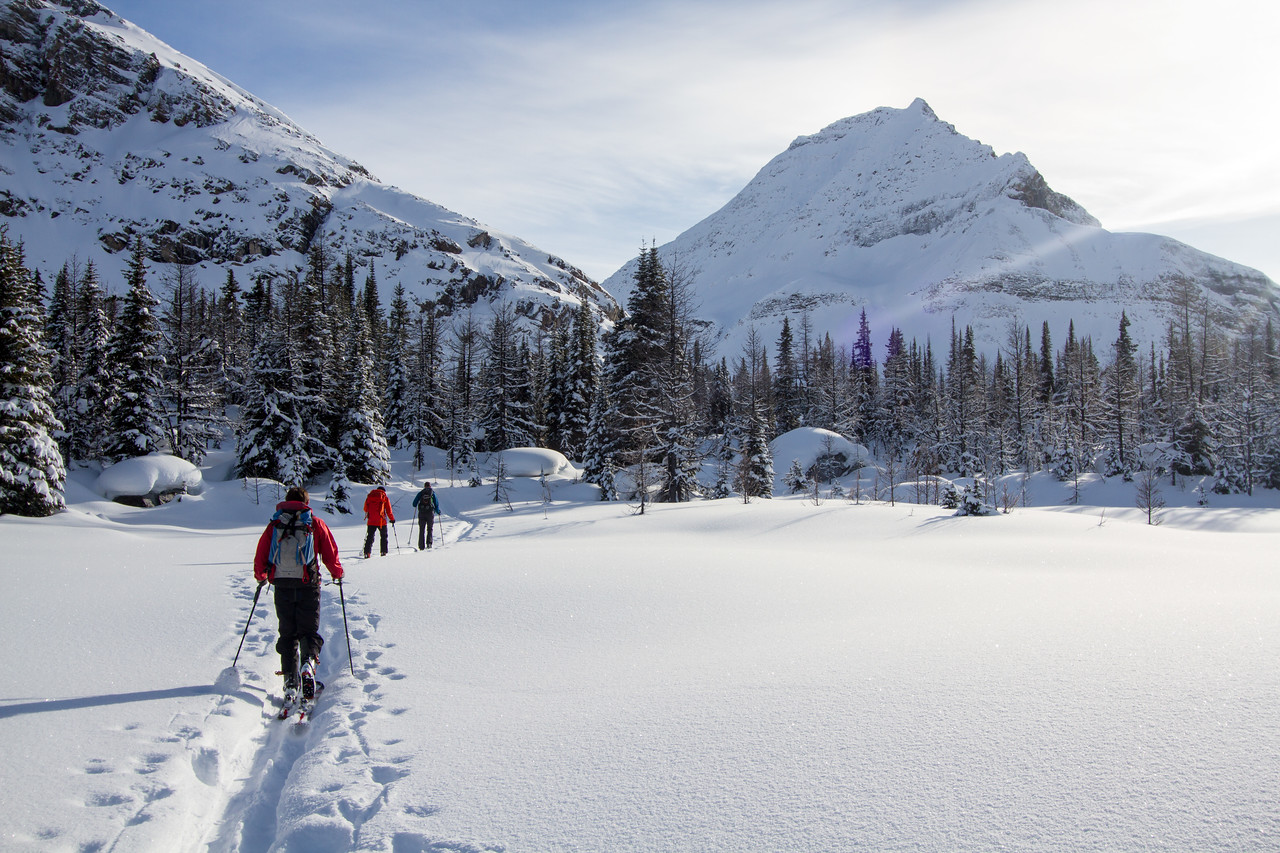 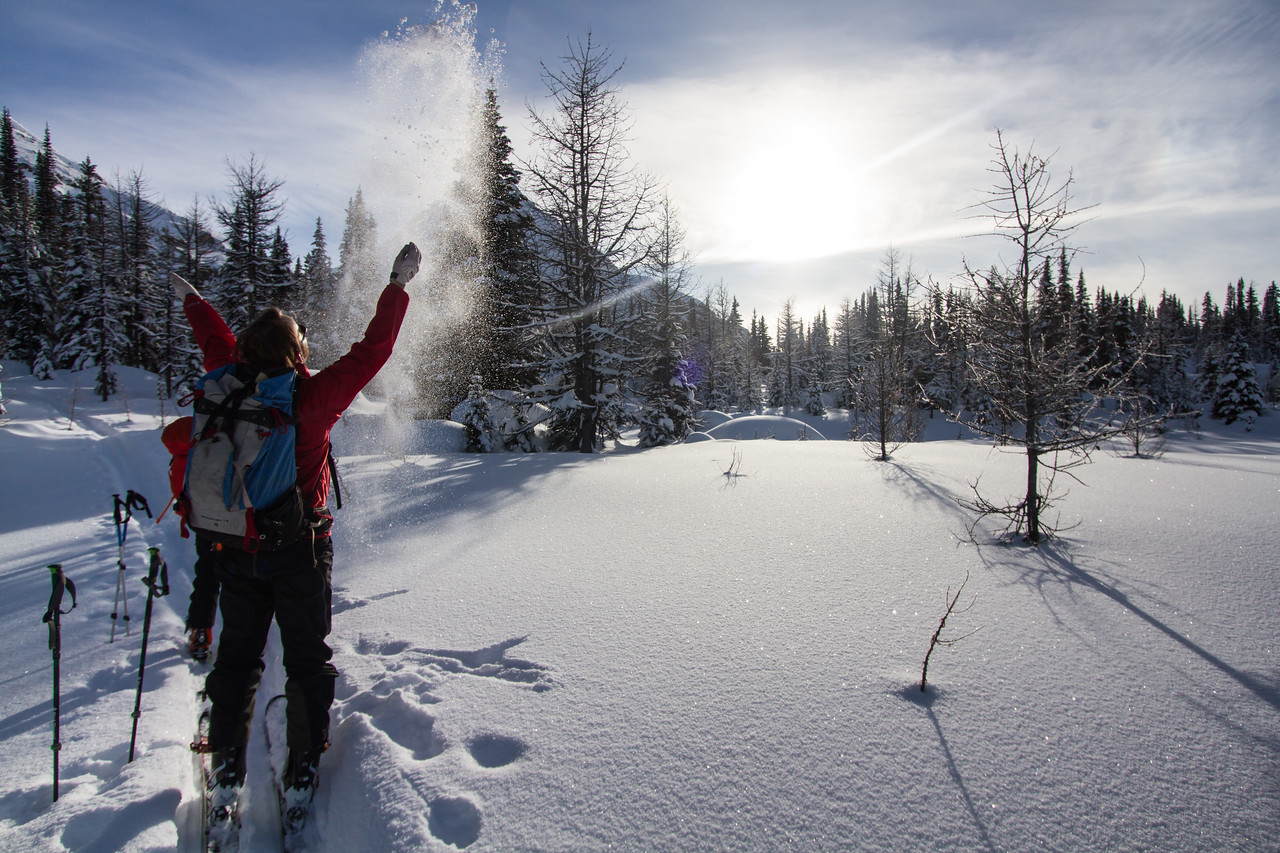 Conditions weren’t actually all that enticing, but the guys found a rock to climb on top of.

And to ski off again.

And the run back down to the hut was actually quite fun. Lovely snow! 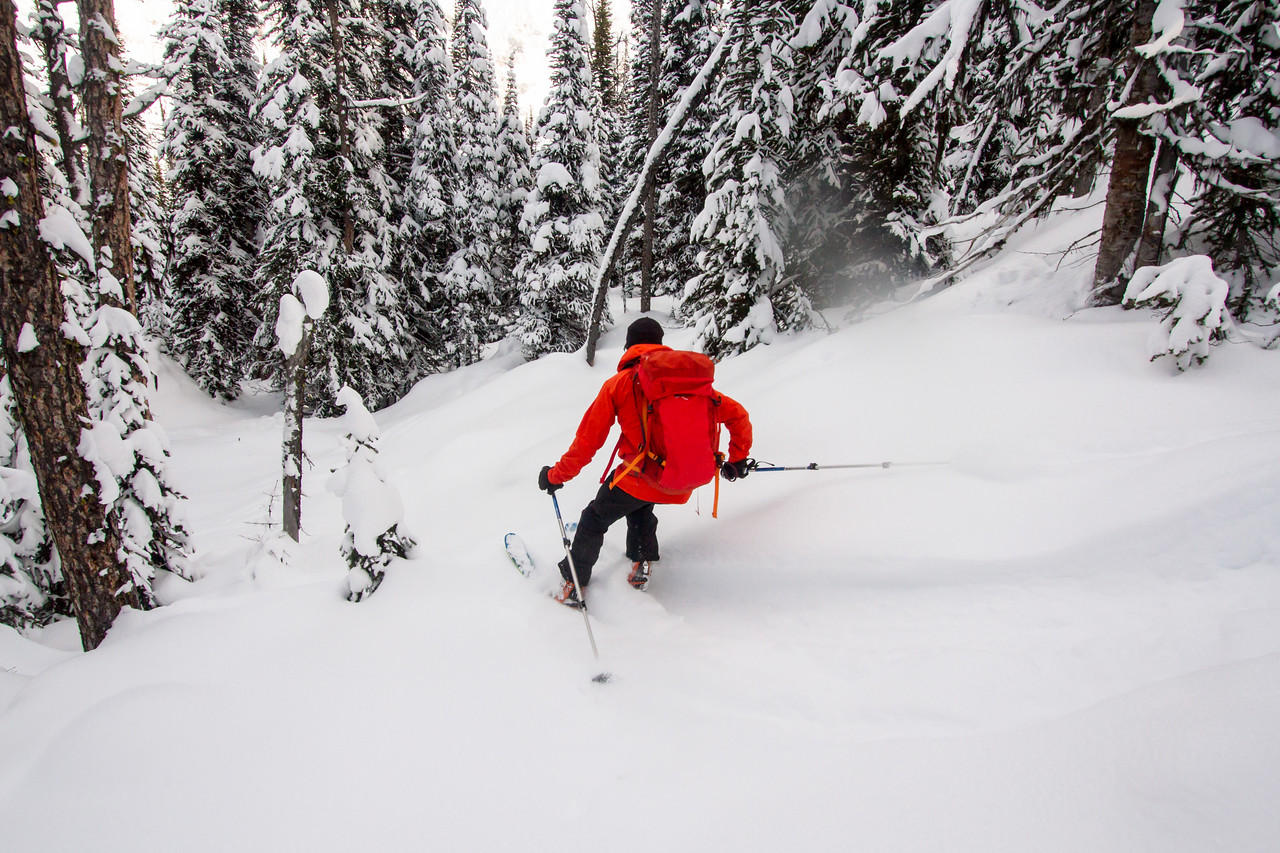 A few of us went out to offer a hand to some of the crew who were skiing in. Then the kids were back at the games, playing Settlers of Catan like fiends.

And the grown ups? We sat around and ate even more food. Of course. 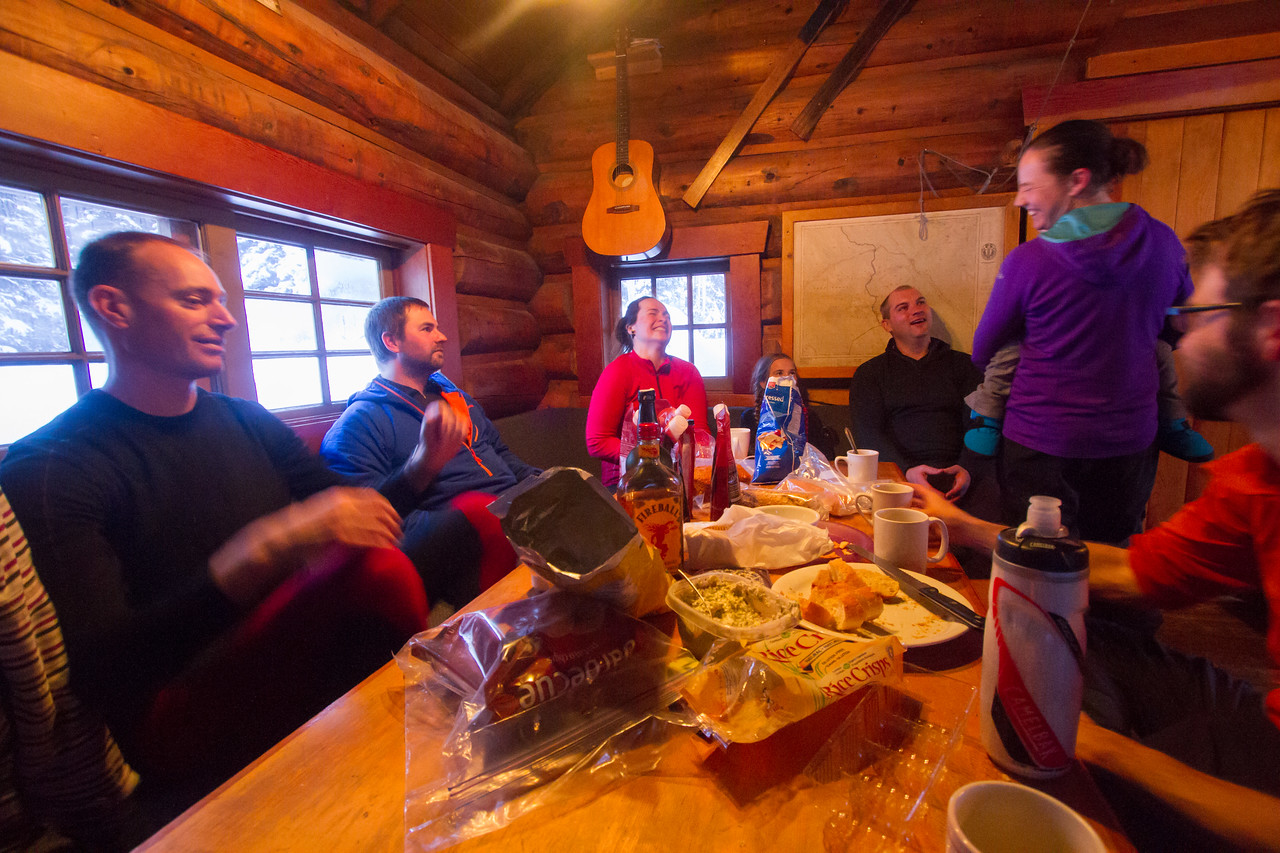 And then, after dinner, it was time for the devouring of the birthday cake! Rainbow style.

Ok, so we went skiing up to Chester Lake again. There was a lot of fresh snow though, and the weather was great, the company was great, and the Moosling had an absolute blast (spoilers).

We met up with Maria and Neil at the trailhead. We got the Moosling into his alpine skis, and hooked him up with a harness – from there, Alex and I took it in turns to tow him up to the lake. It’s far easier than towing a Chariot or pulk, that’s for sure. Although I’m wondering if we should try and get a towing system with a little more give…

We headed up to Elephant Rocks, and I realised the last time I’d made it up to here was when I was around 10 weeks pregnant, and Brendan was busy dislocating his shoulder and having us put it back in (thankfully, otherwise it would have been a long and painful journey back to Canmore to get it done).

At Elephant Rocks, there was a lot of exciting holes to be dug, and food to be eaten. We watched ski-mo guys cruising about getting in lots of elevation.

And then, it was time for the descent! And by that, I mean it was time to take skins off and pretend we were going downhill, where in reality we were trying to tow the Moosling across flat and sometimes uphill sections of trail while having no grip at all because we took our skins off.

On the plus side, the Moosling was having a ball hitting clumps of snow off the trees.

But eventually things did start heading downhill. And all the time on the hill has really helped improve Moosling skiing skills, as he easily cruised down, having a blast on the tight treed trail.

The snow was soft, the sky was blue, the mountains were snow-capped. We had a pretty great run down.

By the time we got back down to the carpark, Finn was pretty keen to ski back up so he could do the run again.

We decided to head back home though. And he fell asleep in the car – big day!

Skoki Lodge is another of those wonderful places that I still hadn’t gotten around to visiting, either in summer or winter. It’s mostly a place to stay overnight (Kate and William stayed there on their royal honeymoon), but they do serve up afternoon tea.

We planned to leave Canmore at a fairly civilised time, after making some calculations based on other ski in times we’d seen, and the fact we wanted to catch afternoon tea at the lodge if possible. But we were skiing up there from the lower parking lot, which magically added another 4km or so, and suddenly our calculations weren’t looking so good.

Also – it was kind of cold! Which was actually fine, as it kept us moving. 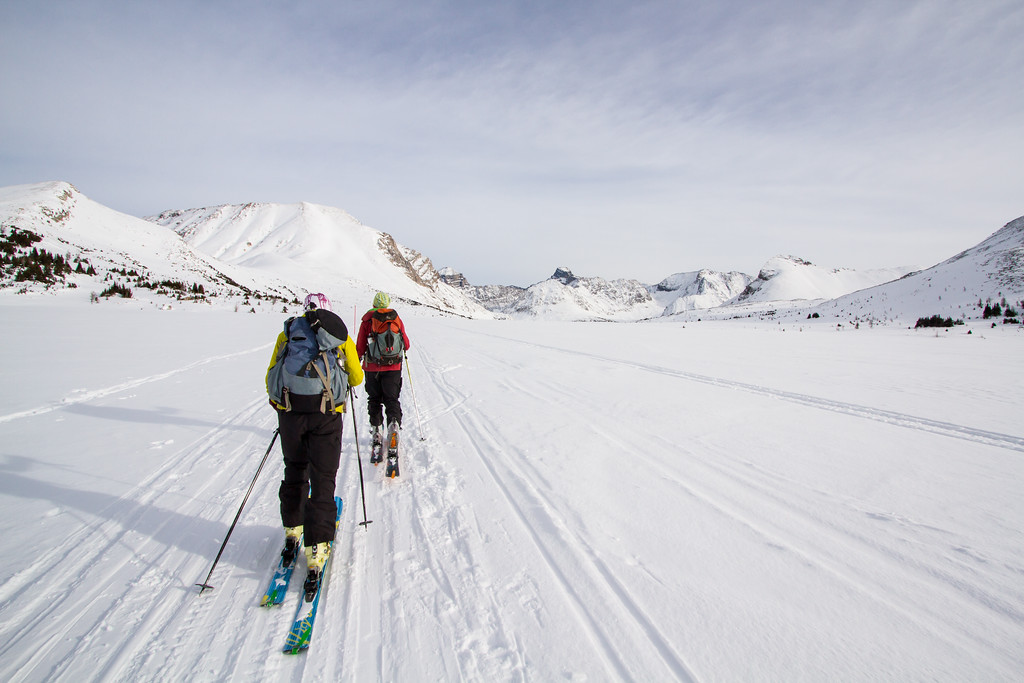 On Ptarmigan Lake we started to run into other groups of skiers. A couple of guys had their kit for kite skiing – we didn’t realise how windy it was until we started the return journey.

And then we ran into this unicorn who was also out ski touring. Those guys get around, don’t believe the hype. 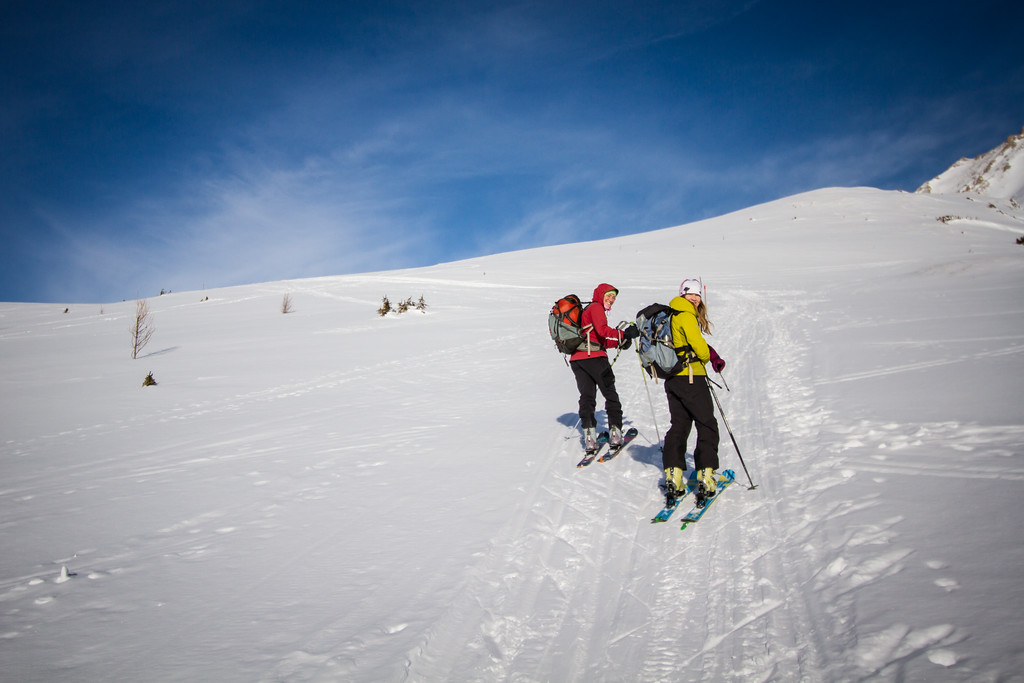 Heading up Deception Pass, it had settled into a glorious blue sky kind of day.

But at the top of the pass we had some decision making to do. Thanks to the extra distance, we didn’t have a lot of time ahead of us before sunset. But it was still conceivable we could get back down to the Lake Louise ski area by sunset, and maybe have to only do the last little bit of skiing in the dark. And we did have headlamps. 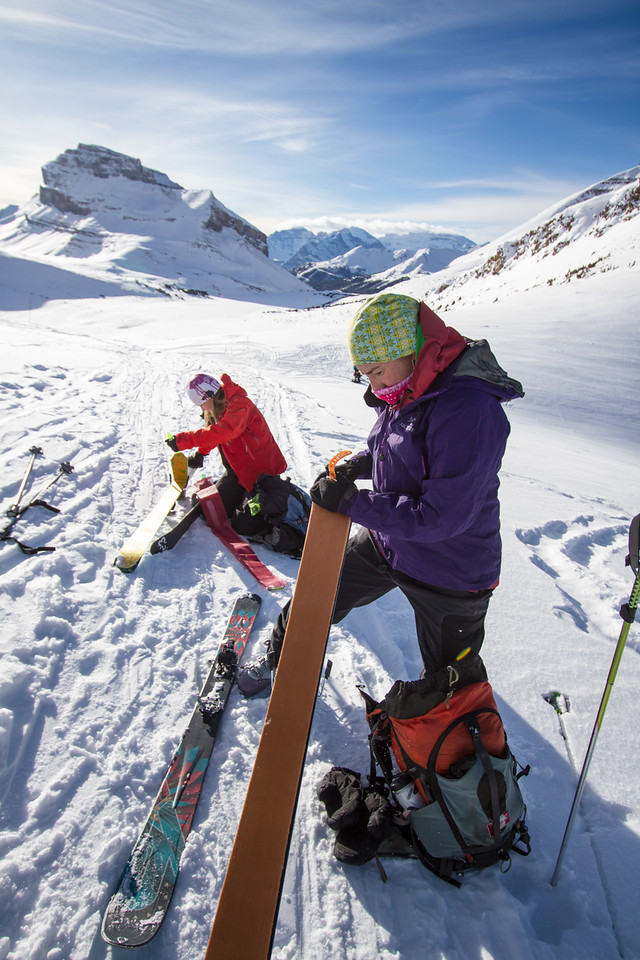 I was definitely struggling to keep up with the others. Being semi-injured for the last 7 months or so hadn’t been great for my fitness, and then having 3 weeks or so of couch time thanks to a cold hadn’t really helped either. Plus I’d decided to wear new boots, and they were definitely rubbing. So at this point I was feeling a little humbled, rather than strong and fit. But we were so close! And I’d never been to Skoki before! 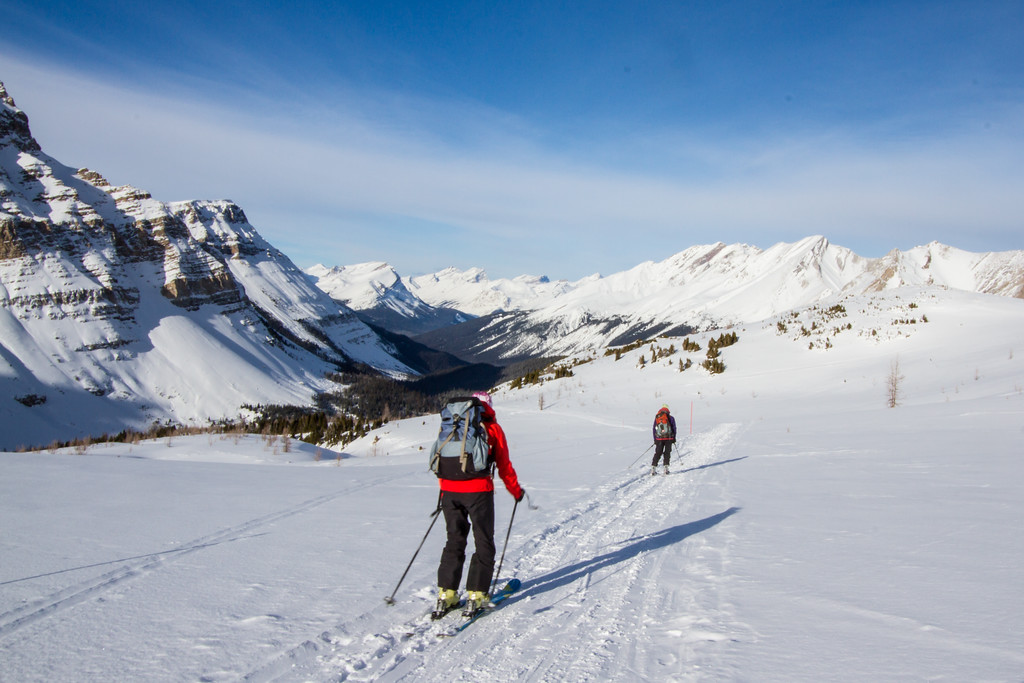 So of course we decided to go for it.

In the end we made it to the lodge only 15 minutes or so after the quoted time for afternoon tea started anyway. Perfect timing!

We had afternoon tea, dealt with blisters, relaxed, drank tea from thermoses, and then re-skinned our skis for an assault of Deception Pass from the other side. 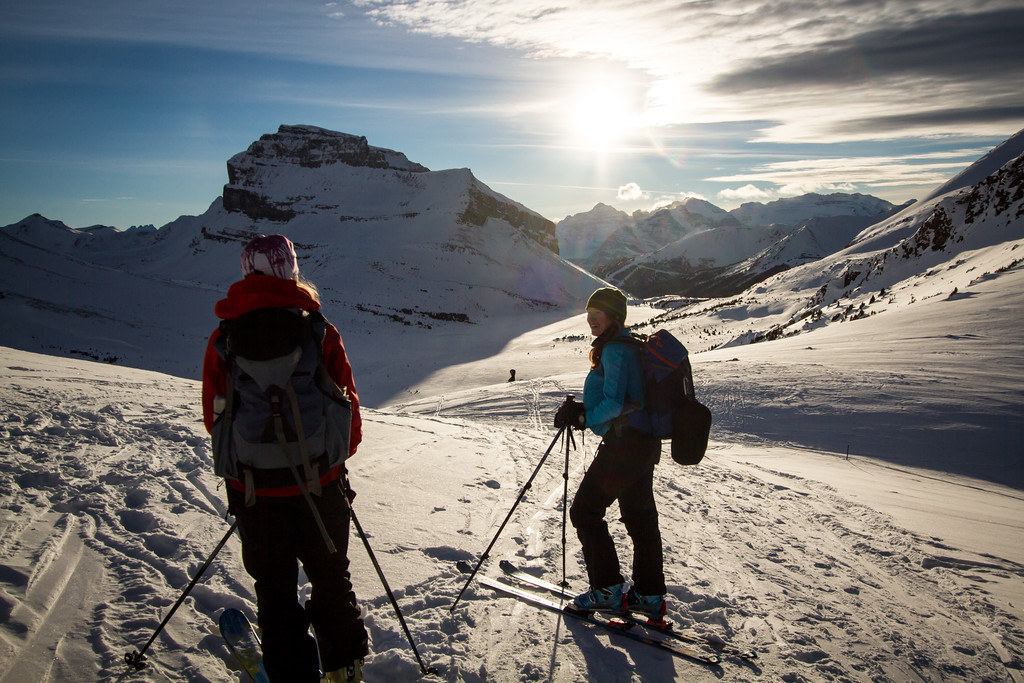 And by the time we got there – well, the sun was still up in the sky at least. Lots of time!

The scuttle back across Ptarmigan Lake was slow and windy. With my telemark skis I managed ok with no skins, but was counting down the marker posts until I’d closed the final gap. And then we were at the final pass, skins off, nothing but descending ahead of us.

And such ridiculously beautiful dusk light that I very nearly skied into a tree on several occasions. 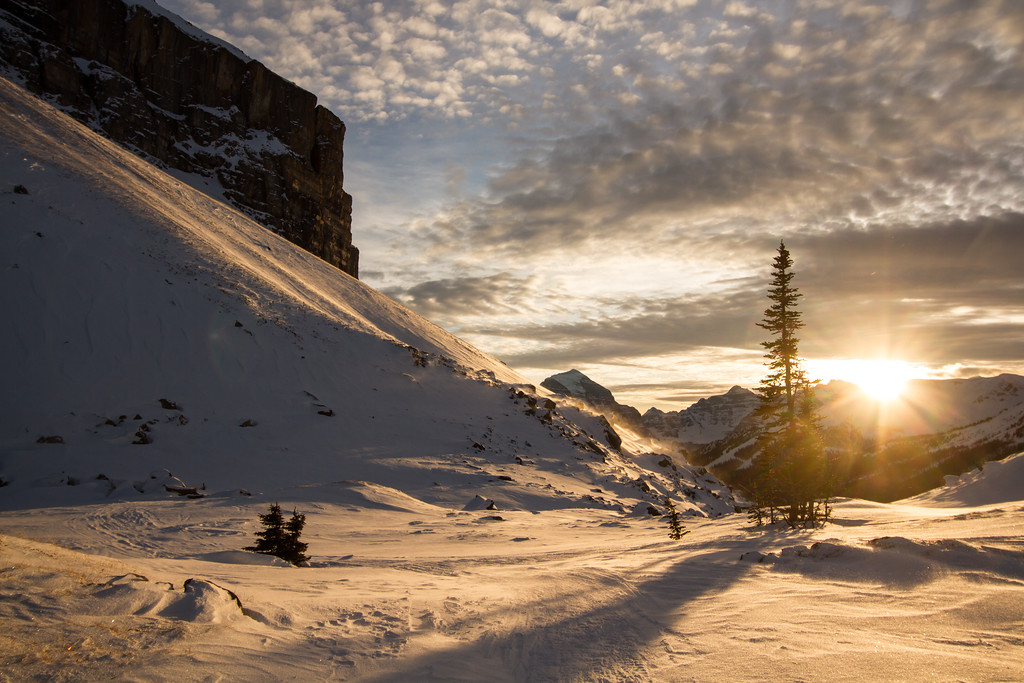 From this point on though, it was fairly fast going. There was some double poling as we drew closer to Lake Louise ski hill, but there was a lot of cruising through snow singletrack through the trees, and for a while there I felt like I was on my mountain bike.

And then the sky started to turn pink, and then pink didn’t even come close to describing it any more.

And we skied down the ski out back to the car, staring at the fading light of the sunset, and made it just before the dusk became too dark for comfortably hurtling downhill at high speed. A very excellent ski day.

A very silly day out on a ski tour by Storm Mountain, on the border of Kootenay and Banff National Parks.. We spent most of it climbing over and under fallen trees, before finally reaching this opening and actually going uphill for a while.