Another frosty morning, I hit the road by 9am and didn’t see a single logging truck. There wasn’t much traffic at all for the first few hours, as I slowly climbed and climbed.

I’d started out just 26km from the end of the haul road, which means I was nearly at the Crowsnest Highway, and in Coleman.

Loose gravel and corrugations. I watched the landscape pass me by, admiring the bright yellows, and thinking that this was a great time of year to ride this route. If I ever ride the Alberta Rockies 700, maybe I’d do a weekday ITT in shoulder season, rather than race with everyone else on a busy weekend. 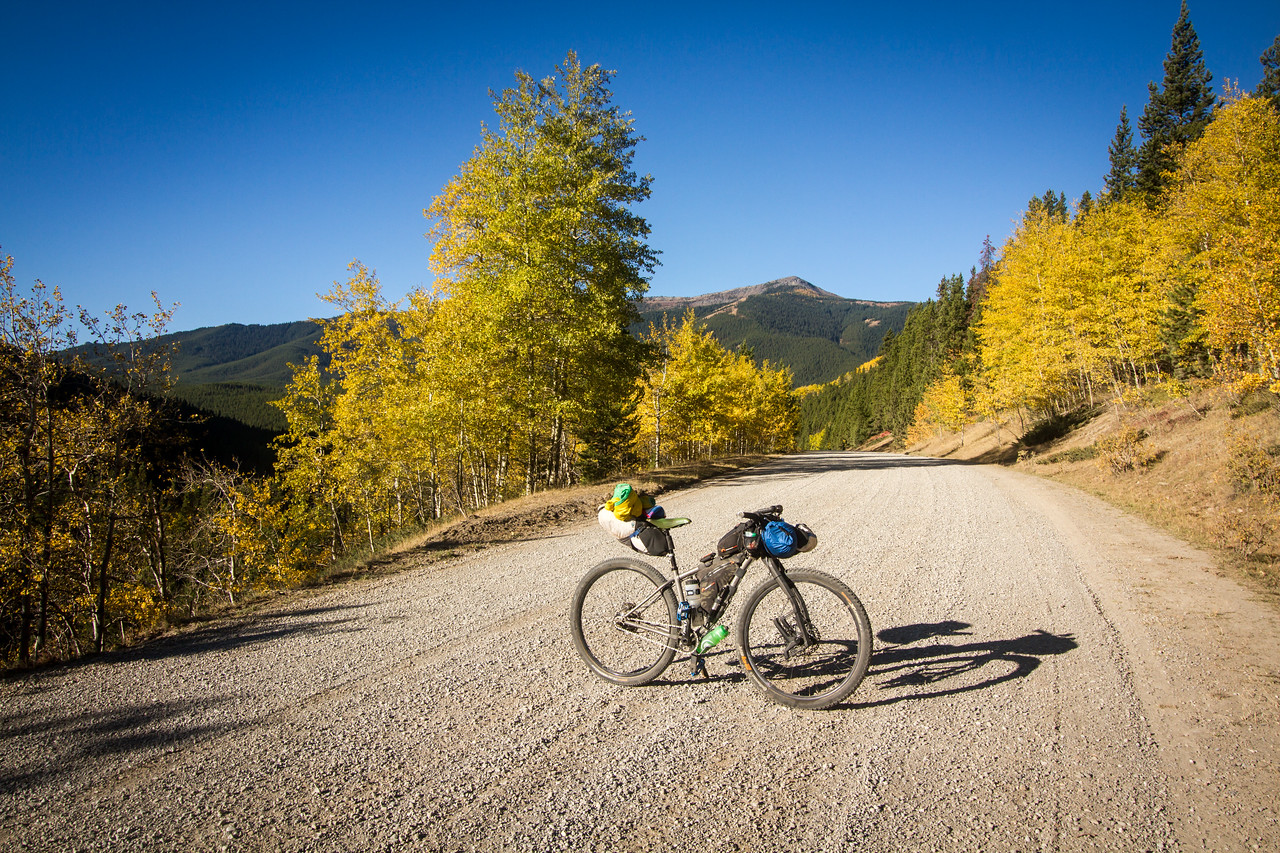 As I got closer to Coleman I turned my phone on, and suddenly, about 6km out, it started vibrating like crazy. Messages, instagram, twitter, emails, facebook, pinterest, rss feeds, the world came crashing back again, via my phone. I started to panic slightly, and wondered why on earth I’d turned the thing back on again. I considered turning back off, but instead sat down by the road, had a break, looked at the mountains, and triaged the influx of message and responded to a few things. 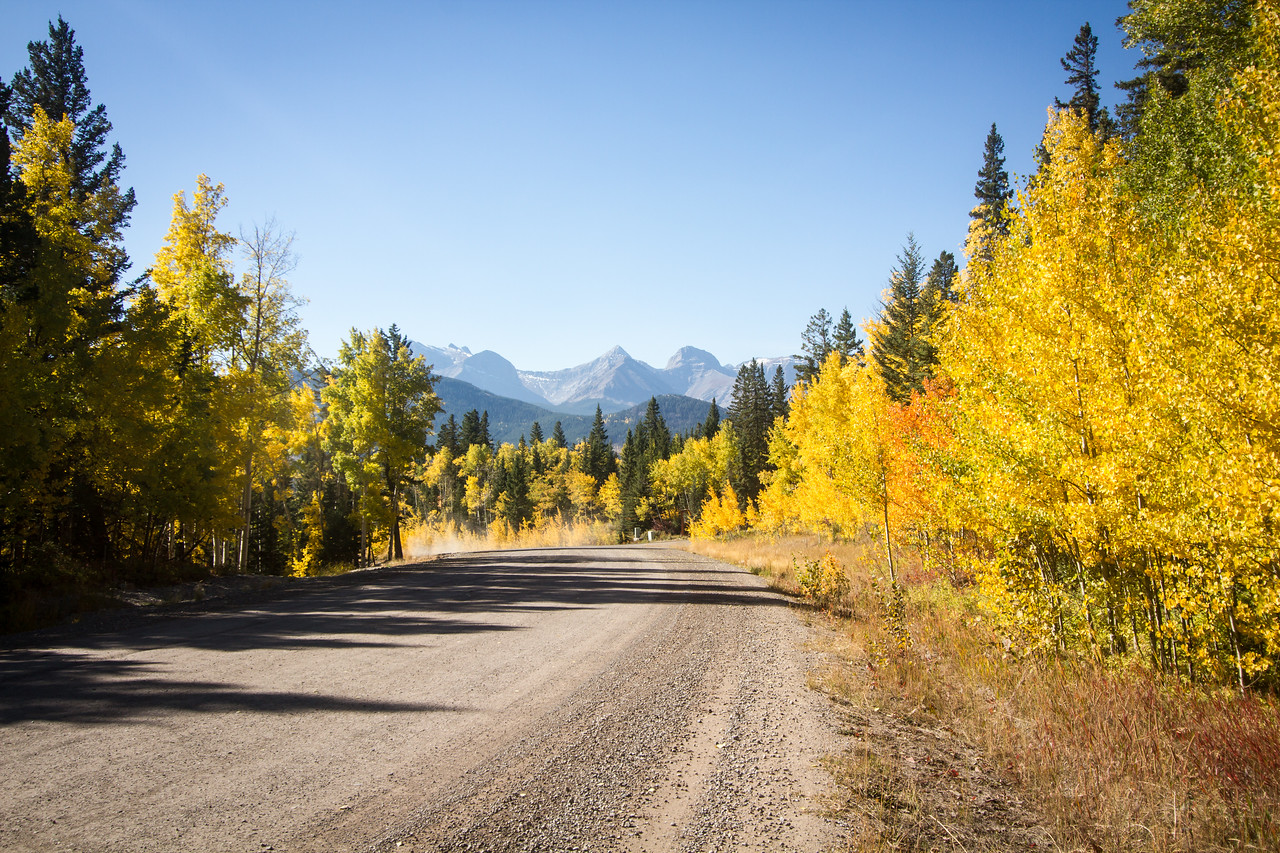 The phone was actually good for a gradual reintroduction back into society. Town was crazy! There were houses, and cars and people everywhere! Noises and smells! Decisions to make! It was all thoroughly overwhelming.

I went into the 7-Eleven and bought two things I didn’t really need, and forgot I’d actually gone in to get batteries. But right next to the service station as a tiny unassuming cafe hidden in a small house – and it was awesome! I ordered a panini and a latte, and sat charging my phone and responding to the world.

Eventually I realised that I should go to the washroom, and indeed should really have gone there and washed my hands and face before I devoured my food like a savage. Oh well.

I considered buying a second round of the same thing, but decided instead to hit the road.

I headed slowly out of town into a headwind along the highway. Trucks flew past uncomfortably close. Thankfully the turnoff came eventually – this is where I was heading into uncharted territory (for me at least). I wasn’t sure what to expect. It started off as a lovely narrow gravel road winding through a little valley, alongside a creek, past some great camping spots and a waterfall. As I climbed further I hit a few small beaten up wooden bridges – they seemed to act as a stopping feature for a lot of traffic.

Then it got tricky. I was following a line on a gps, and there were a nest of trails through the hills. I overshot the overgrown turn-off, backracked, and headed across a stream and through high reeds and marshy terrain. Then the track started to climb, an overgrown track, up and up.

Then all of a sudden the line hit a more used road! Well, “road”, I think it was an ATV track, as it takes great pleasure in going steeply up and down through the forest. There are a few hike-a-bike pushes, mostly because I missed the easier (but overgrown) ride-arounds until it was too late.

By now I was feeling thoroughly spooked though. I hadn’t seen anyone in what felt like forever, and I felt like I was in the middle of bear territory with little strength, and the sun was dropping lower in the sky.Â Â And then there were bear prints! Relatively recent, just black bear, but still.

I felt like I just had to get through to the Corbin Mine Road, and really hoped that the connection worked.Â  I missed one final easier ride-around, pushed up one more unecessary hill, and was rewarded with a lovely view as I descended to Corbin Mine Road. 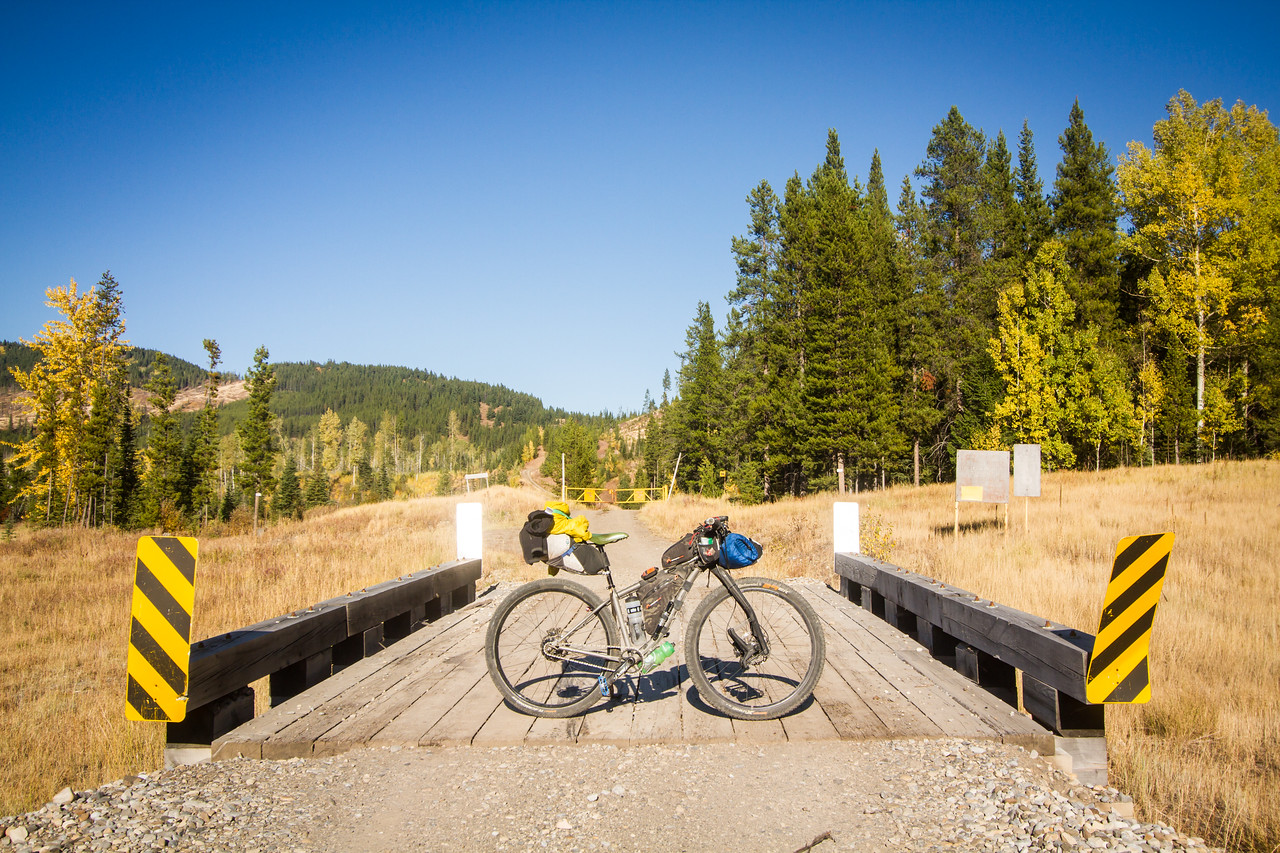 Once I got there, I sat and snacked and was gripped with indecision. My fear of bears was fading, or at least being edged out by concerns about the cold wind. I could camp in the wide open in a nice spot that felt safe from bears (in hindsight, mostly because it was a little patch of cell reception, which obviously doesn’t protect you from bears at all), but it would be windy and cold.

I ended up riding further down the sealed Mine Road, and bivied near the road that was marked as a turnoff on my connector line. I snacked, ate dinner, and moved around from place to place, and after dinner found a place to settle in the trees. I was above the river valley and it was warm and still in my copse of trees. The weather forecast had predicted a warm night, perhaps it would be; it would make it easier to get an early start tomorrow morning.

I watched the beautiful sunset sky, and the mountains peeking out from behind yellow aspens, and settled down to an unsettled sleep, worrying about bears sneaking up on me to eat my Lara bars.