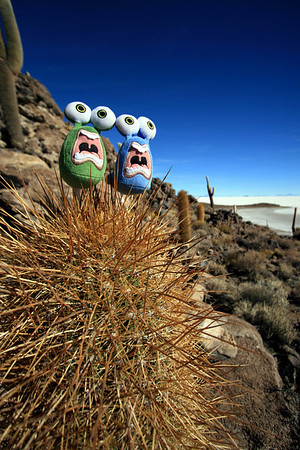 After all of the encouraging words we’d read about Lima, we weren’t particularly looking forward to spending any time there. A guidebook I’d read before leaving basically suggested: “If you spend only a couple of days there, and see the main sites, you might not hate it.” And maybe there’s not much there to see if you’re keen on going to museums and art galleries and general tourist attractions. But it’s not that bad. The main thing that tipped it into favour for me was the food – we ate so much fantastic cheap food there.

But also the Museum of the Inquisition. It had excellent mannequins on display. I’m sure it was probably educational too, but with all the plaques in Spanish, and us too impatient to wait for an English tour, we just wandered round on our own at managed to get a rough idea what the plaques were talking about with our rudimentary Spanish skills. And admired the mannequins. The San Francison Church and Monastery is also worth visiting, mainly for the Catacombs beneath. According to the Internets: “Originally constructed in 1546, it is one of the oldest churches in South America. It also served as the first official Catholic cemetery in Lima, at a time when the dead were laid to rest in catacombs beneath the church, itself an echo of an old Roman custom… Bodies were brought here, covered in quicklime, and soon reduced to skeletons. It was a quick and sanitary way to dispose of the bodies. Over 25,000 people were buried in this tomb.”

As such there were huge piles of bones artistically arranged in the Catacombs – mainly thigh bones and skulls, as they last longest.

The town of Cusco, sprawled out over the surrounding hills – which also have hill graffiti scrawled over them, not very visible in this photo though. An ‘istorical monument (the Cathedral). And some Incan stonework. There’s lots of it around town, and if you read the guidebooks they tell you to go and look at it all. I was not particularly excited by it – though it did manage to fill me with disdain for all modern attempts at building worldwide.