Another weekend, another hut trip – it must be summer in the Canadian Rockies.

This time around we were heading out to spend two nightsÂ in theÂ Stanley Mitchell hut. In the carpark we decided to hike in via the Iceline – the weather was so nice, and who knows what the next couple of days would bring. Plus there was the added advantage of getting the uphill over and done with first thing. At least that was the theory.

We had three small hikers hiking in with us, and a fourth so small that she was carried the whole way in.

The boys did a pretty great job of hiking in up the enormous hill. Occasionally they argued or complained, but they also did cute things like hiking along holding hands and chatting.

It wasn’t too long before we were up high enough to be getting views of Takakkaw Falls.

And then, stopping for lunch, goofing around taking photos in front of Takakkaw Falls.

I got the boys to work on their jumping – they’ll be experts in no time. 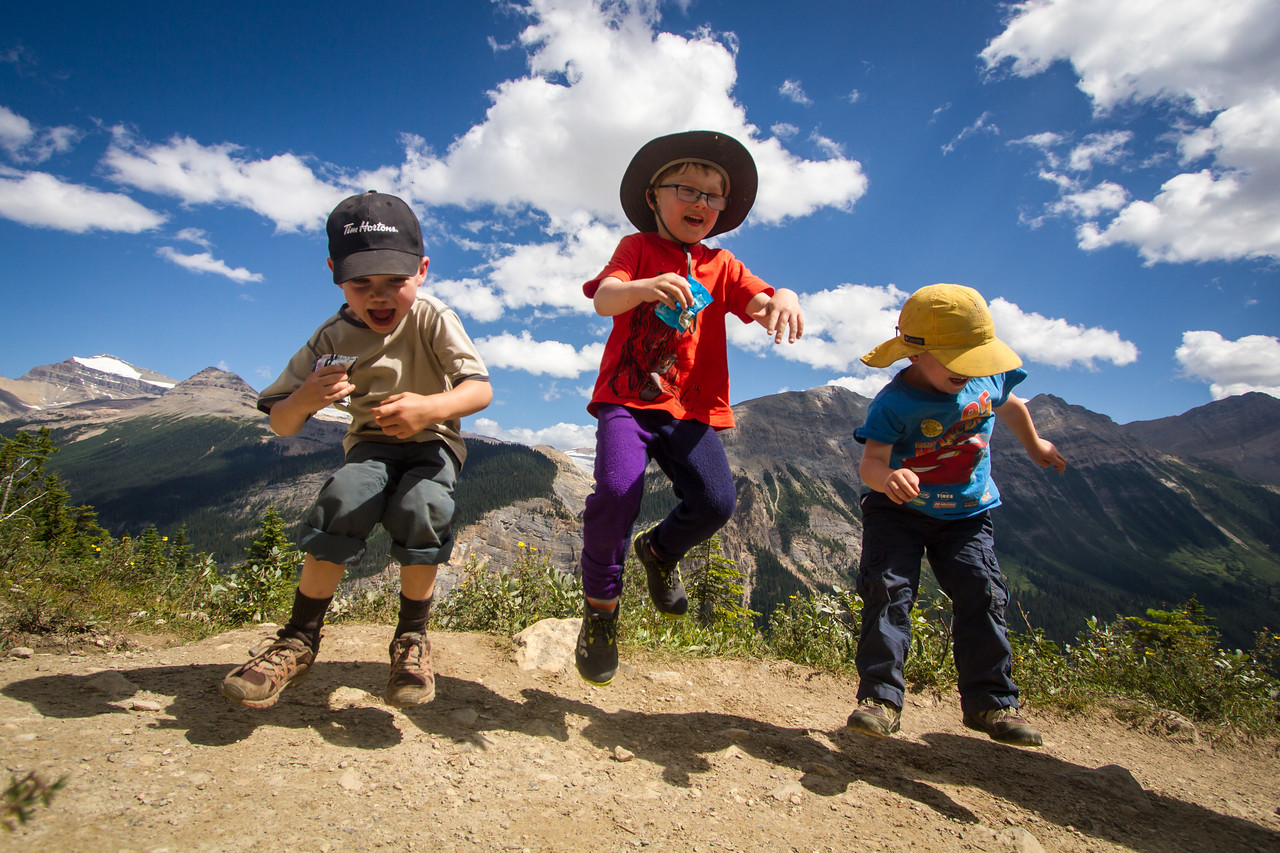 We kept thinking we were nearly out of the trees, and nearly done climbing. But the climbing kept coming and coming. Hmmm. With the way the Iceline trail rolls up and down, you really can’t guarantee you’reÂ done with climbing until you’re back down in the trees again.

More switchbacks brought us higher and higher, until we finally reached the moraine bench (and views of the Scott Duncan hut).

Then we could see glaciers up above us – aha, finally, now it feels like we’re really onÂ the Iceline! 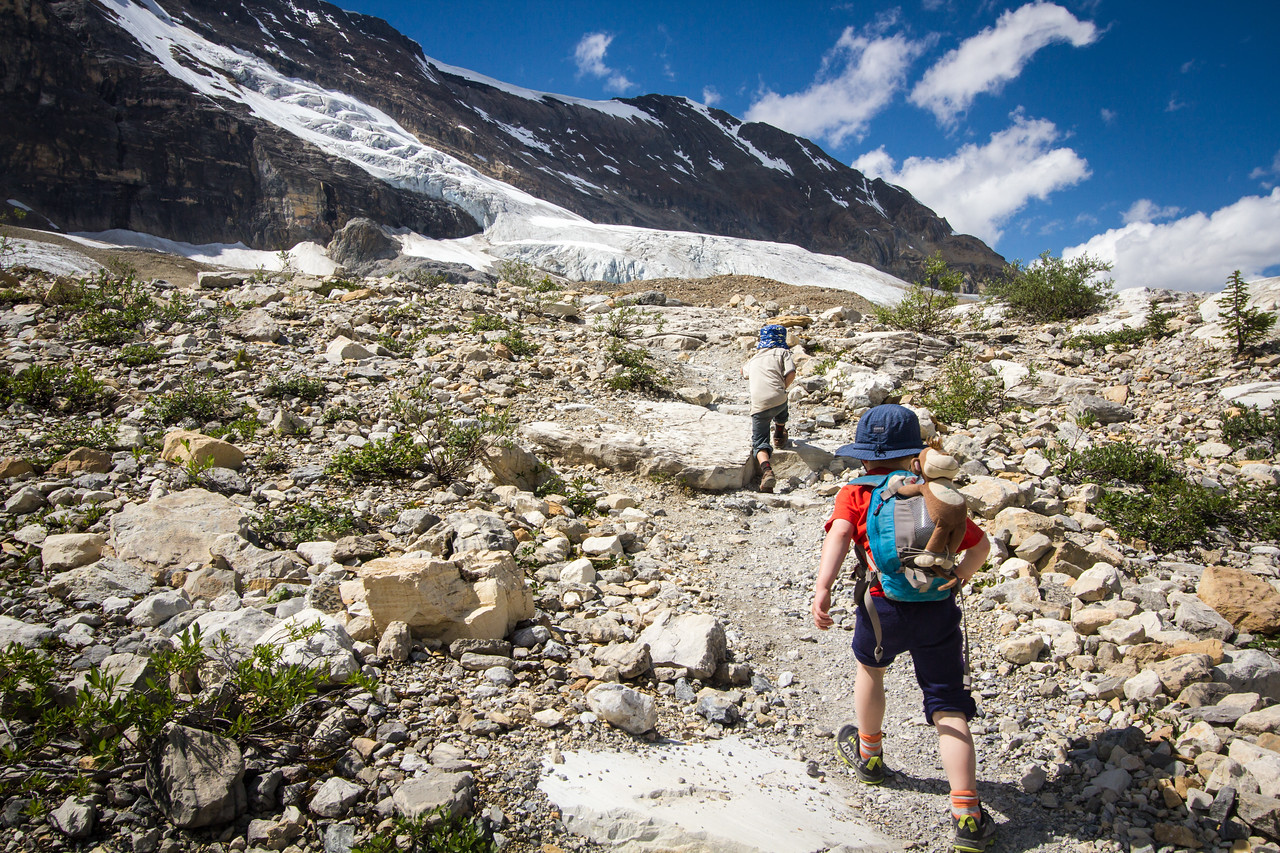 There were some magnificent enormous boulders strewn around. Good for both shady snack stops, and for climbing on top of and ambushing approaching hikers.

There were as many streams to cross as I remembered too. Fresh meltwater, nice and cool on a warm day. 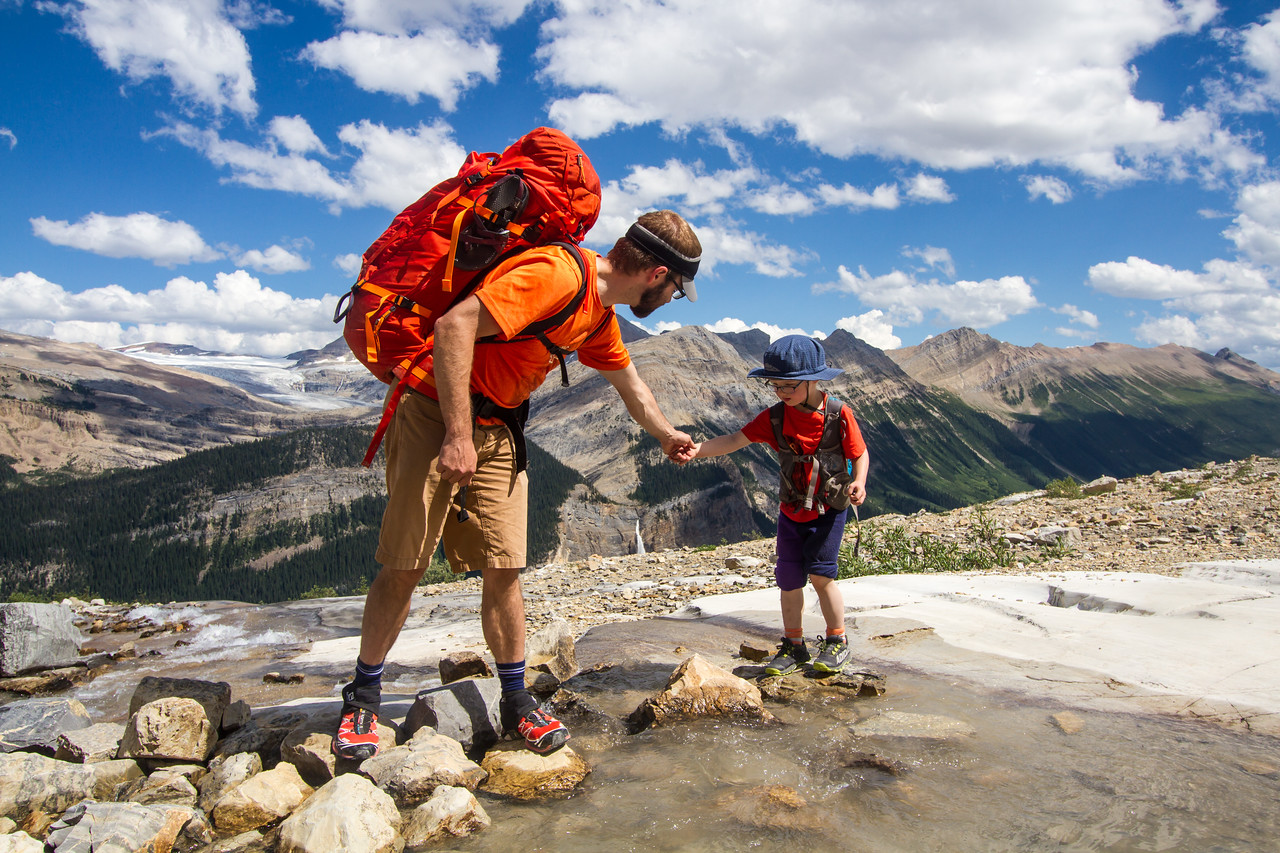 It was a ridiculously gorgeous day too.

We found a patch of snow along the trail at one point, and the boys gleefully took the opportunity to build snowmen, and pelt parents with snowballs.

Then, finally, the descent off the far end. A few switchbacks, and we were back into the trees, hallooing for bears and racing to the hut.

And into the hut! We met up with the others in our group, and had the first of a series of delicious group meals.

Most of the beds were in the loft – and the ladder access was alternately fun and terrifying for the kids. 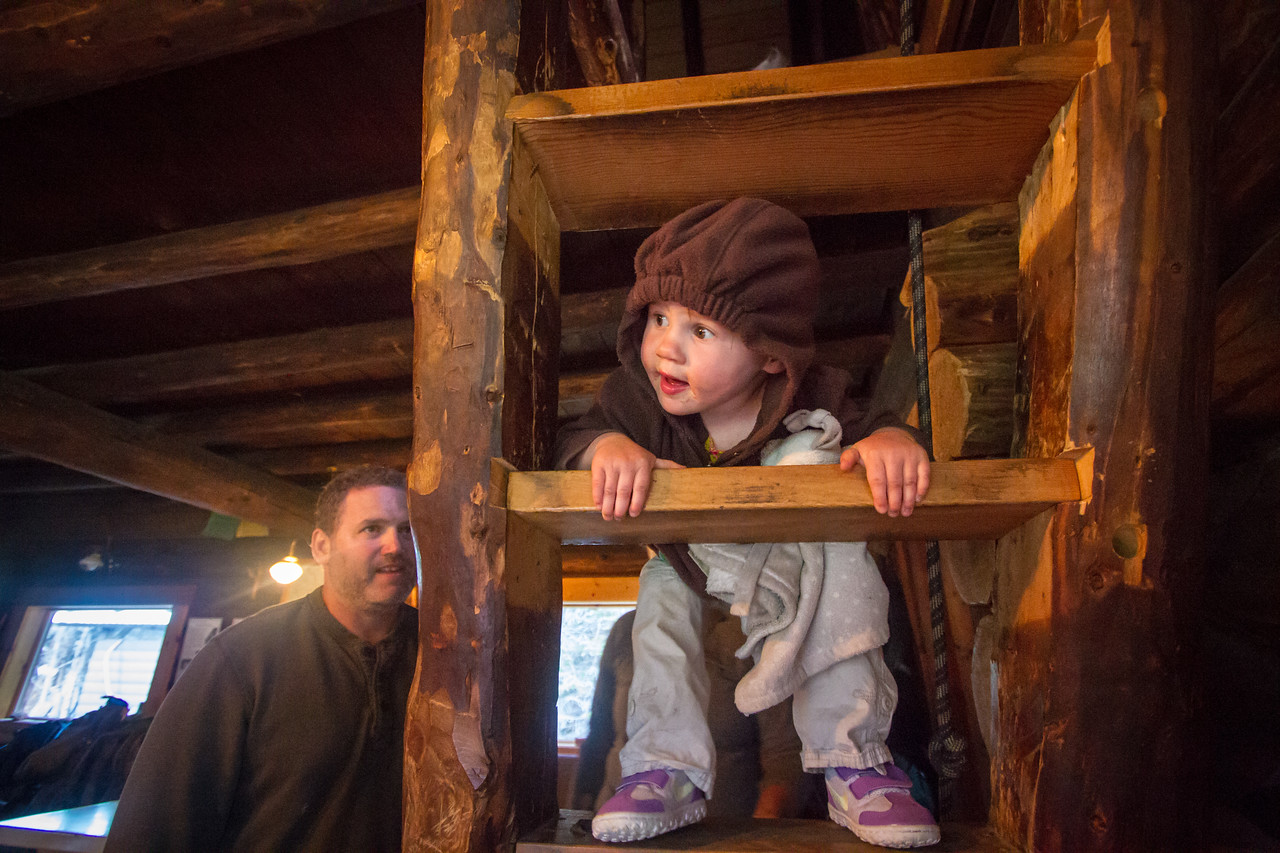 My contribution to dinner on the first night – chocolate cake with chocolate buttercream icing. The cakeÂ turned into a chocolate loaf and muffins, due to baking tin restrictions at the hut. Who am I to complain though, there were baking tins and an oven at the hut! 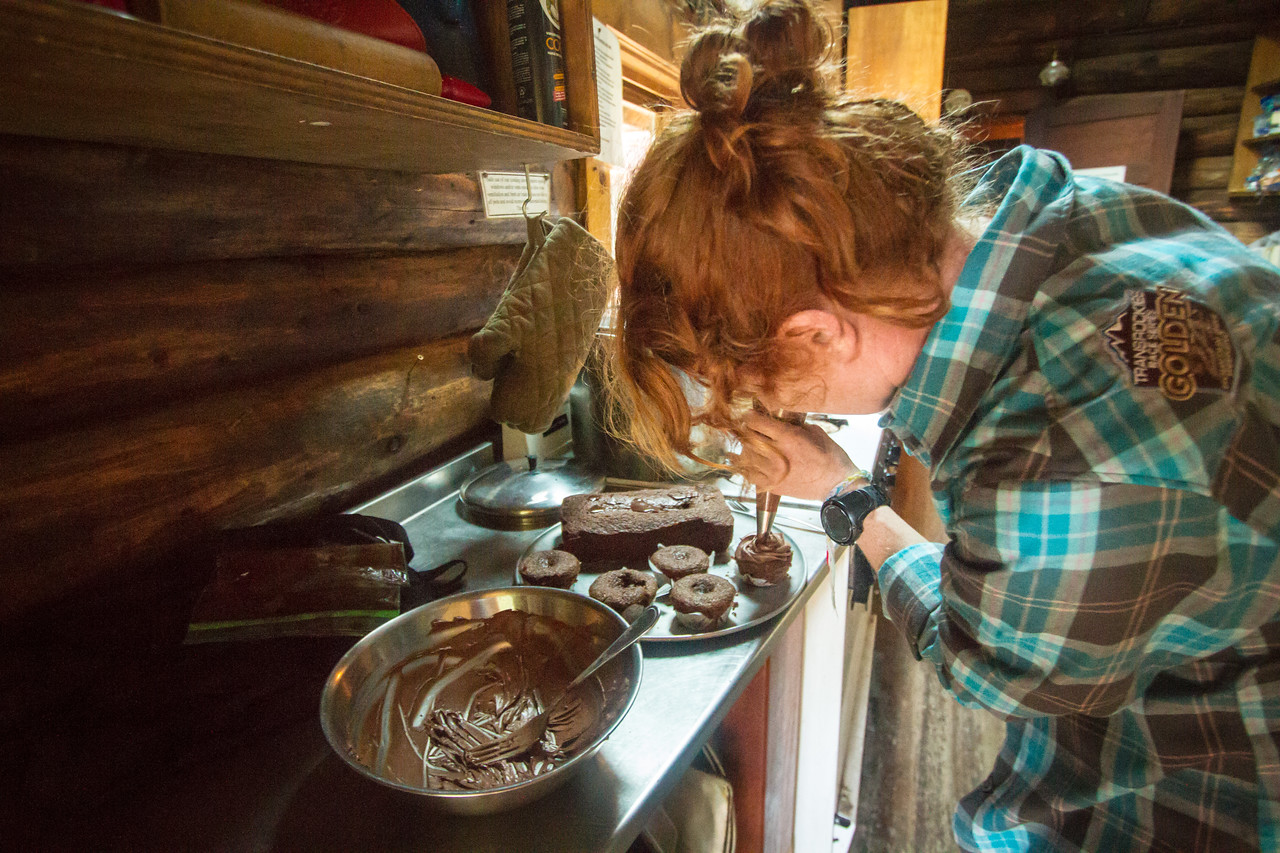 The stars came out, eventually. Views from the hut were pretty lovely.

And then, breakfast time!

But after breakfast, the first of many play sessions in the Little Yoho River.

Our home for two nights – Stanley Mitchell Hut. The inscription above the fireplace reads ‘sic itur ad astra’ – the latin, ‘thus one goes to the stars’ or something similar. 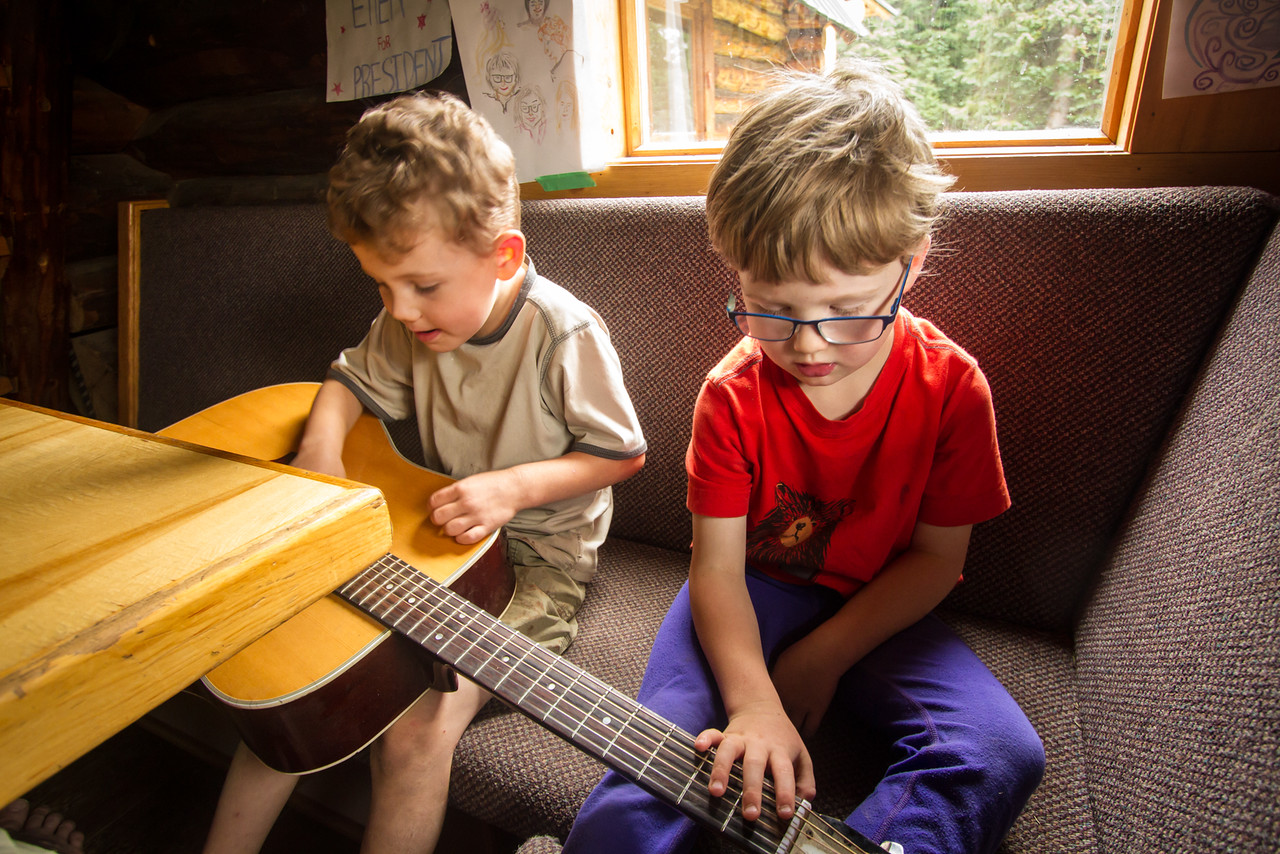 And then hanging out on the island. 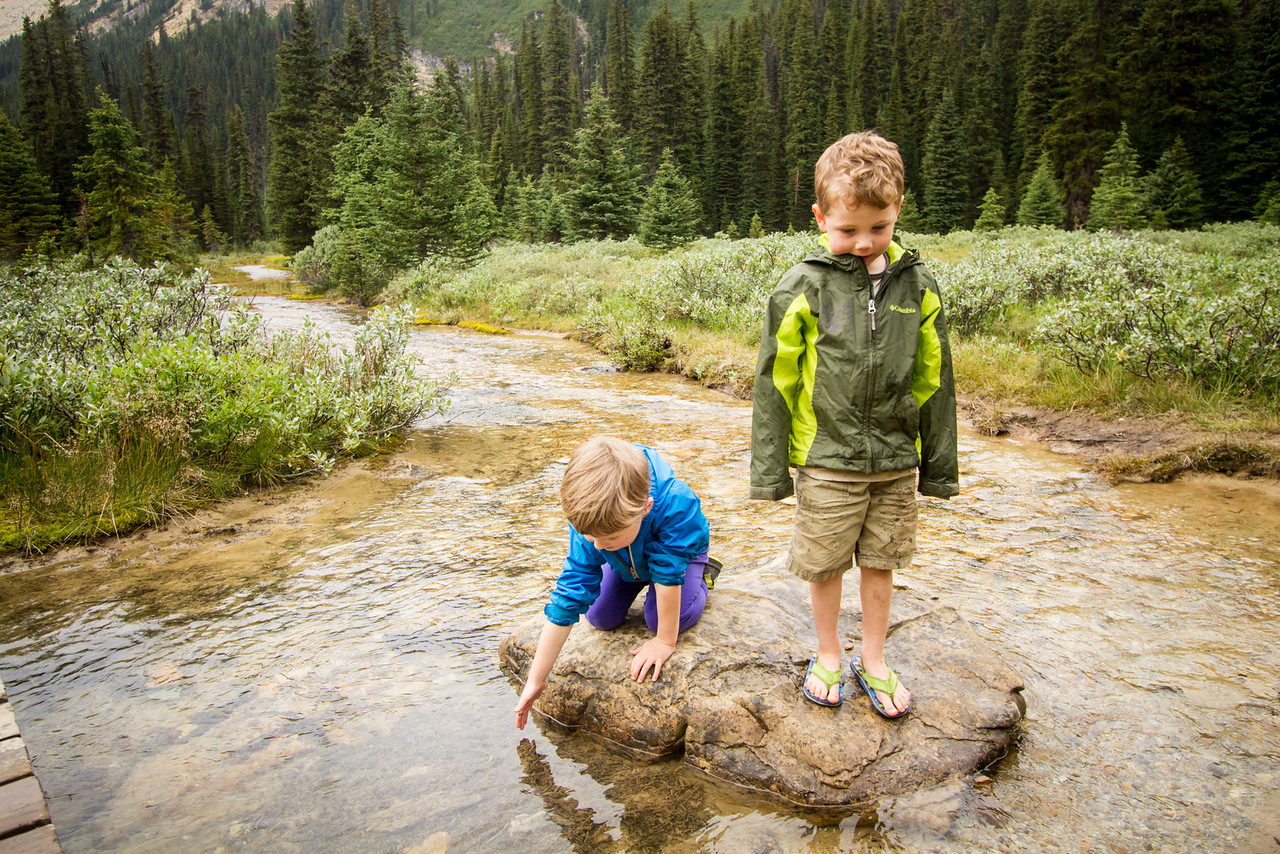 Games of bocce were made even more interesting by all the ground squirrel holes around. Sometimes spotters were deployed, other times the players just chose to live dangerously, which led to a couple of reaches into holes to retrieve balls. None were lost over the course of the night.

Alex, Kat and Gavin went for a run in the rain, up to Kiwetiknok Pass.

Then I played an enemy, and had rocks thrown into the river to splash at me by the hoards on the far side of the river. Rivers and rocks – they have endless entertainment value, you just cannot go astray if you camp near rocks and rivers. 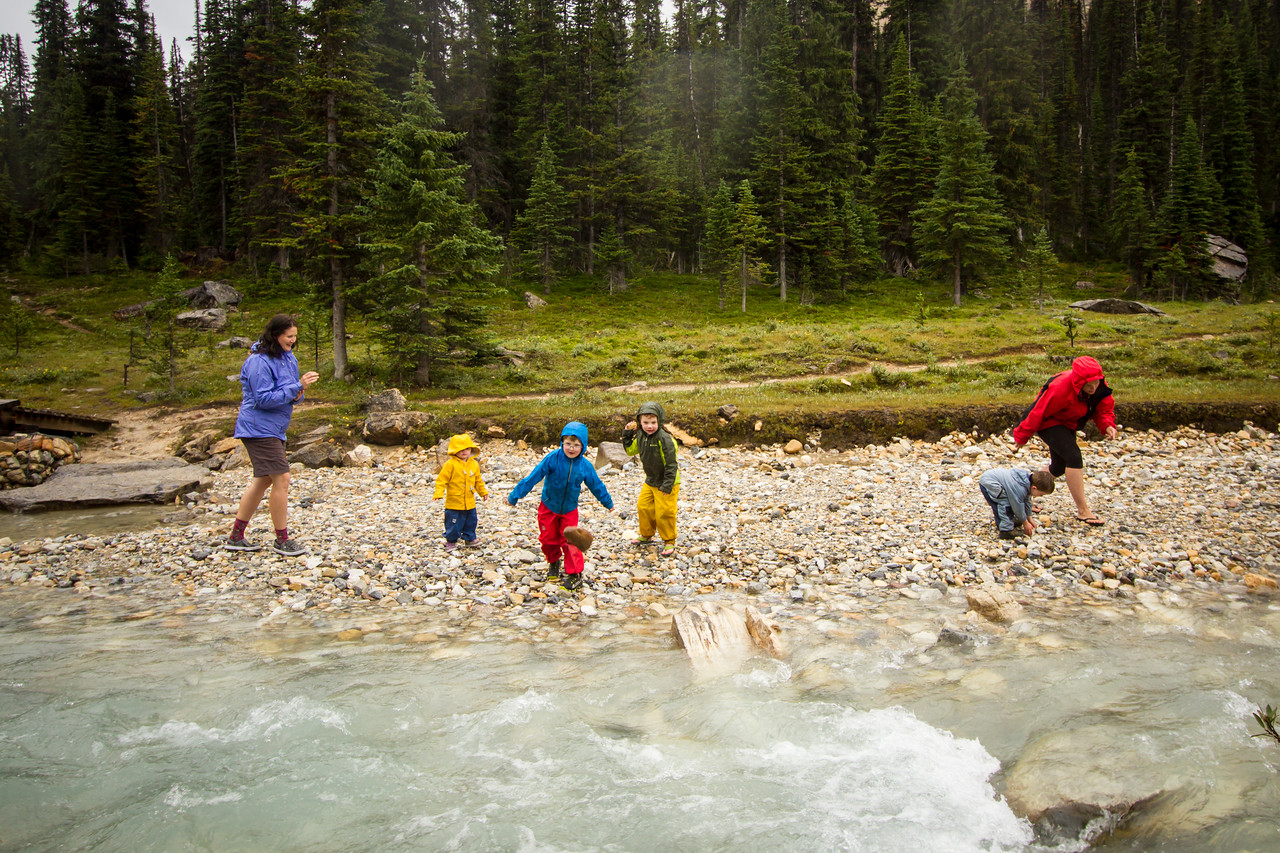 And then, it was Sunday morning, and we allÂ started to hike away. But first! A photo of the whole crew.

On our way out, we stopped for snacks at the bridge (or lunch, maybe it was lunch) and Alex napped, as per usual. The Little Yoho River was getting bigger and bigger.

Then, after a lot of downhill, we made it to Laughing Falls. There was a unicorn there. 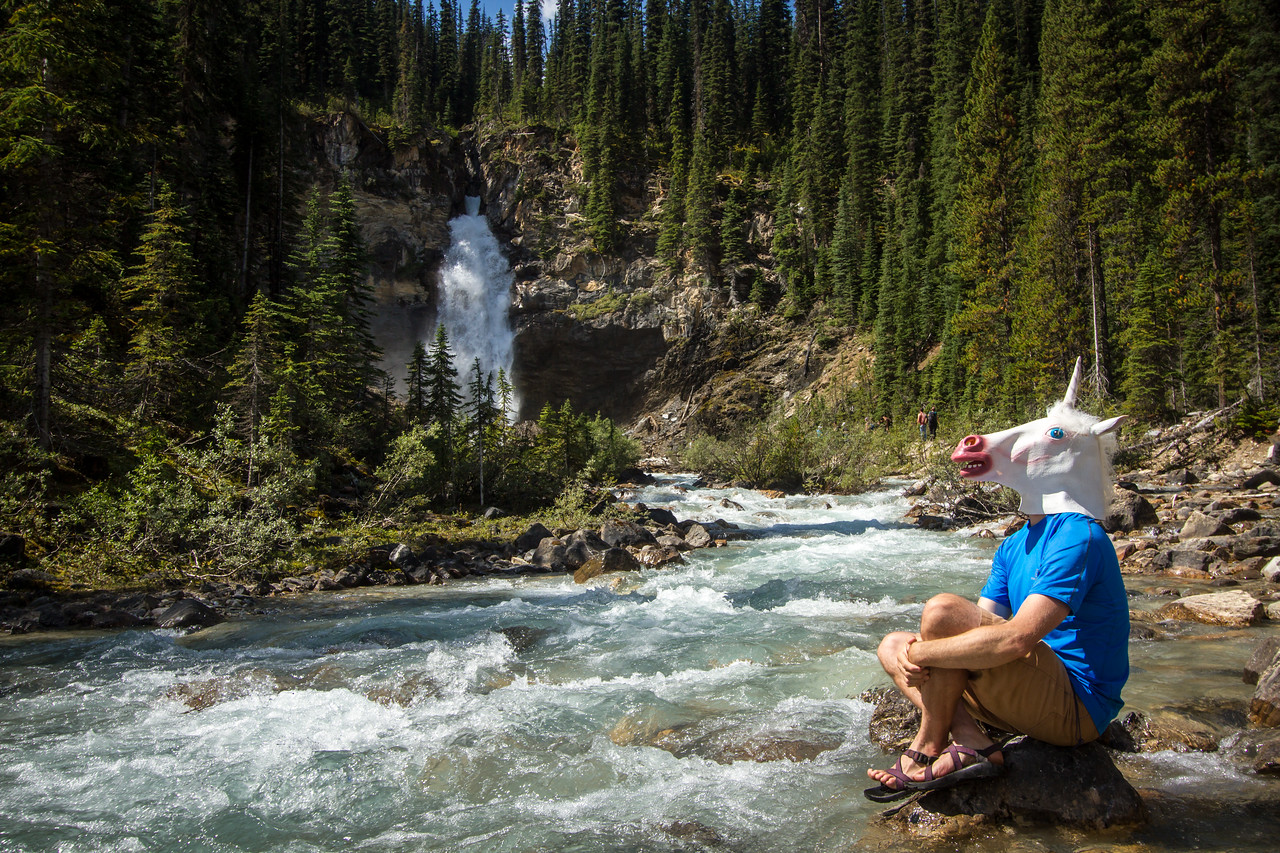 The boys played a game of ‘hide the rock, and then make the adults find the rock that you hid’. Rocks and rivers, I’m telling you.

Then comes the unfortunate part of the hike, where it’s kind of flat and in the trees. Some people probably love it, but it’s the part of the whole loop that I find hardest to love. Â Fortunately the jelly bean and smarties fairies were both visiting, and so the boys had treasure hunting to keep them entertained. 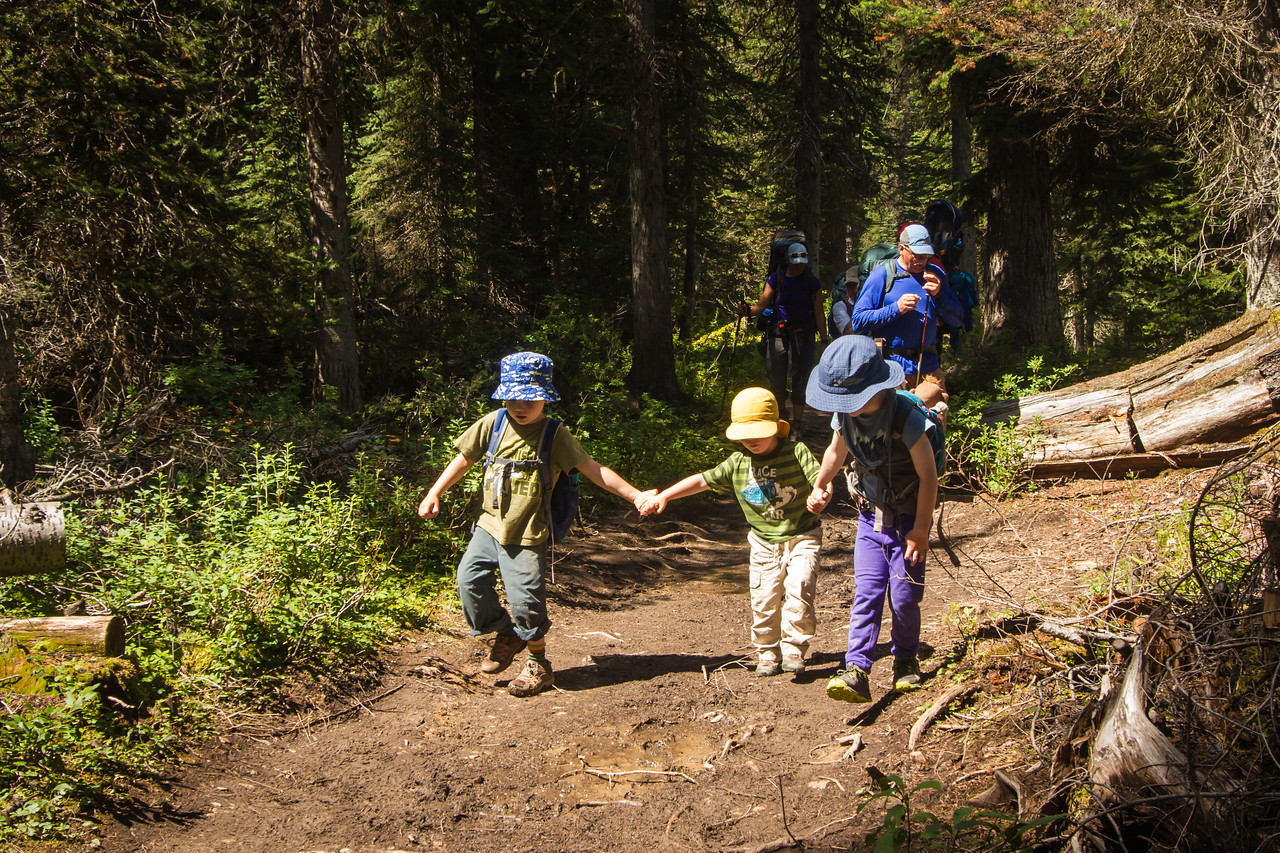 But then finally, we could see Takakkaw Falls. And we’d made it!