We were lucky enough to be invited along on another TanyaTripâ„¢, when another family had to pull out. With the entire Asulkan Hut booked out for our group, and us never having spent time in the Rogers Pass area at all in summer, we were very excited to be able to say yes.

We’d been a bit distracted in the lead up to the hike, and so when we turned up in the parking lot, we were only kind of organised. I had my rainbow fur gaiters and unicorn head though, so really, what else would we possibly need? We’d skied in to the hut before in winter, so we knew it was about 7km in – along the valley at first, and then steeply up. And we knew the weather was likely to be stormy on the first day. What am I saying, we were totally prepared!

It was great to catch up with some of the crew from our Easter Elizabeth Parker Hut trip. I gained a new hiking best buddy, and I’m still wearing the rainbow woollen bracelet she finger-knitted for me.

As we got further upstream and out of the trees, the views became absurdly spectacular. Asulkan Valley, you are beautiful. 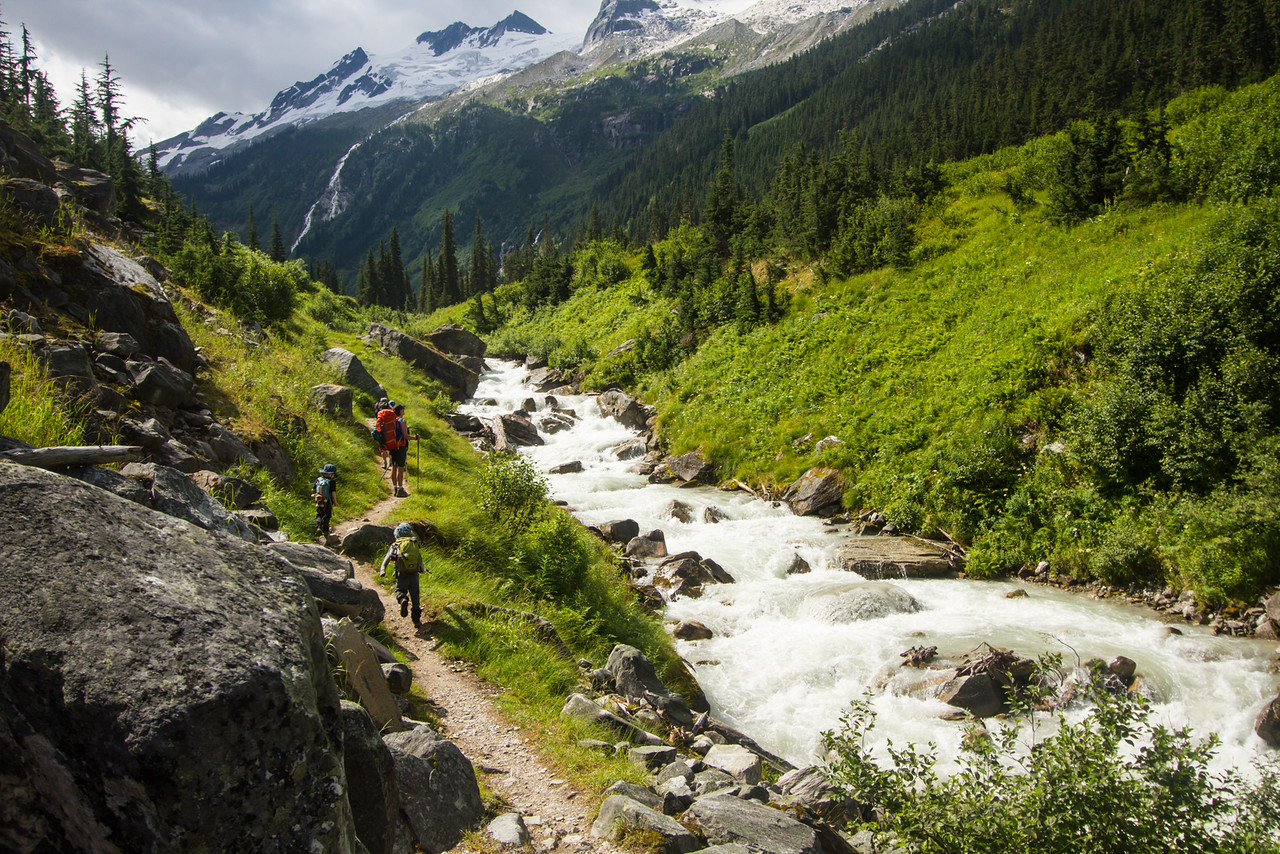 But then the threatening clouds kicked into action, and there was a downpour! We darted under a tree and got rain coats on. After a little indecision we just kept hiking, wandering past Tanya and her family sensibly hiding under a tarp. For a while it was hailing! 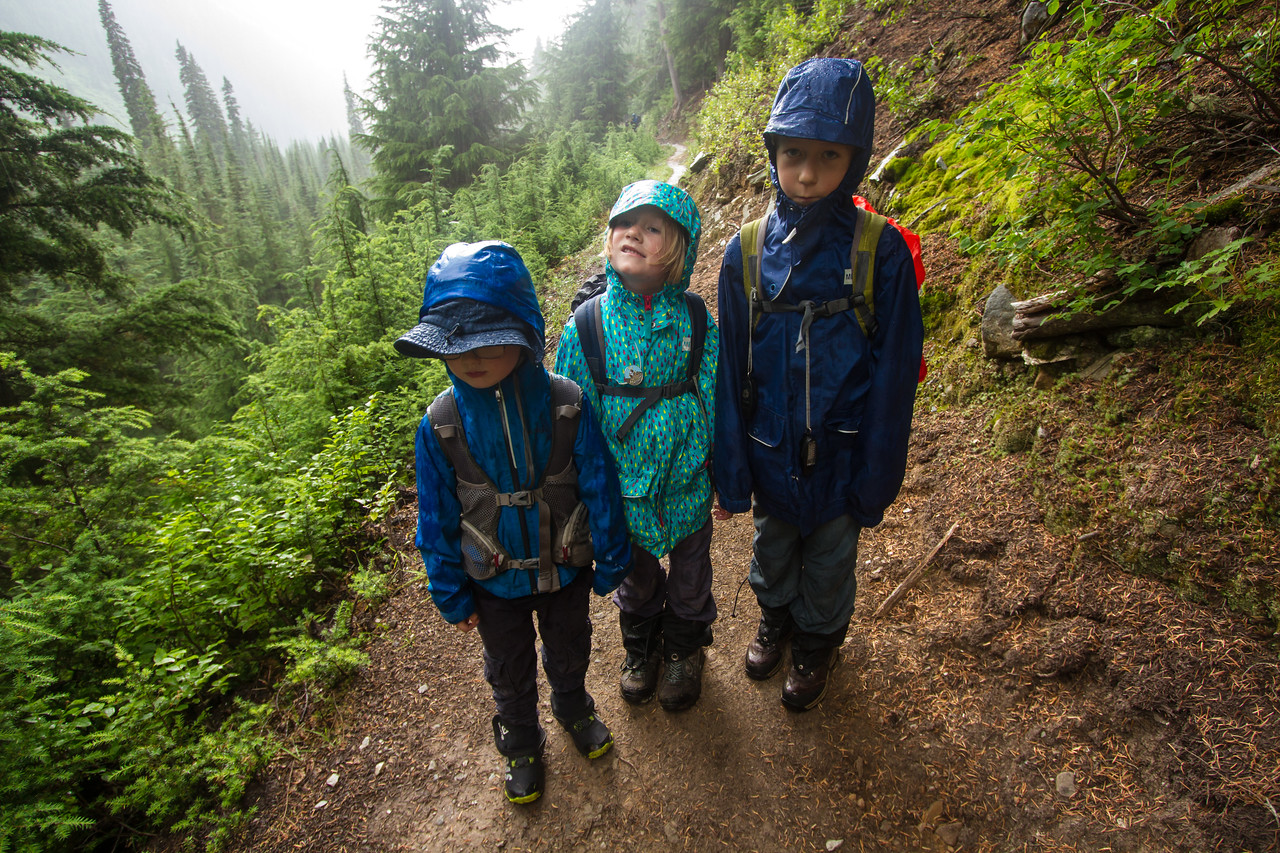 But then, as quickly as a chocolate-stuffed waffle is eaten, the clouds passed, and we were hiking in the sun again.

The kids were getting to know each other again too, discussing the merits of pack covers among other equally weighty and serious topics of conversation.

As we started to climb up onto the moraine, we were eyeing the skies suspiciously. Thunder and lightning had been rumbling through, but it seemed like we’d have enough of a window to get up to the hut before another storm came to the valley. 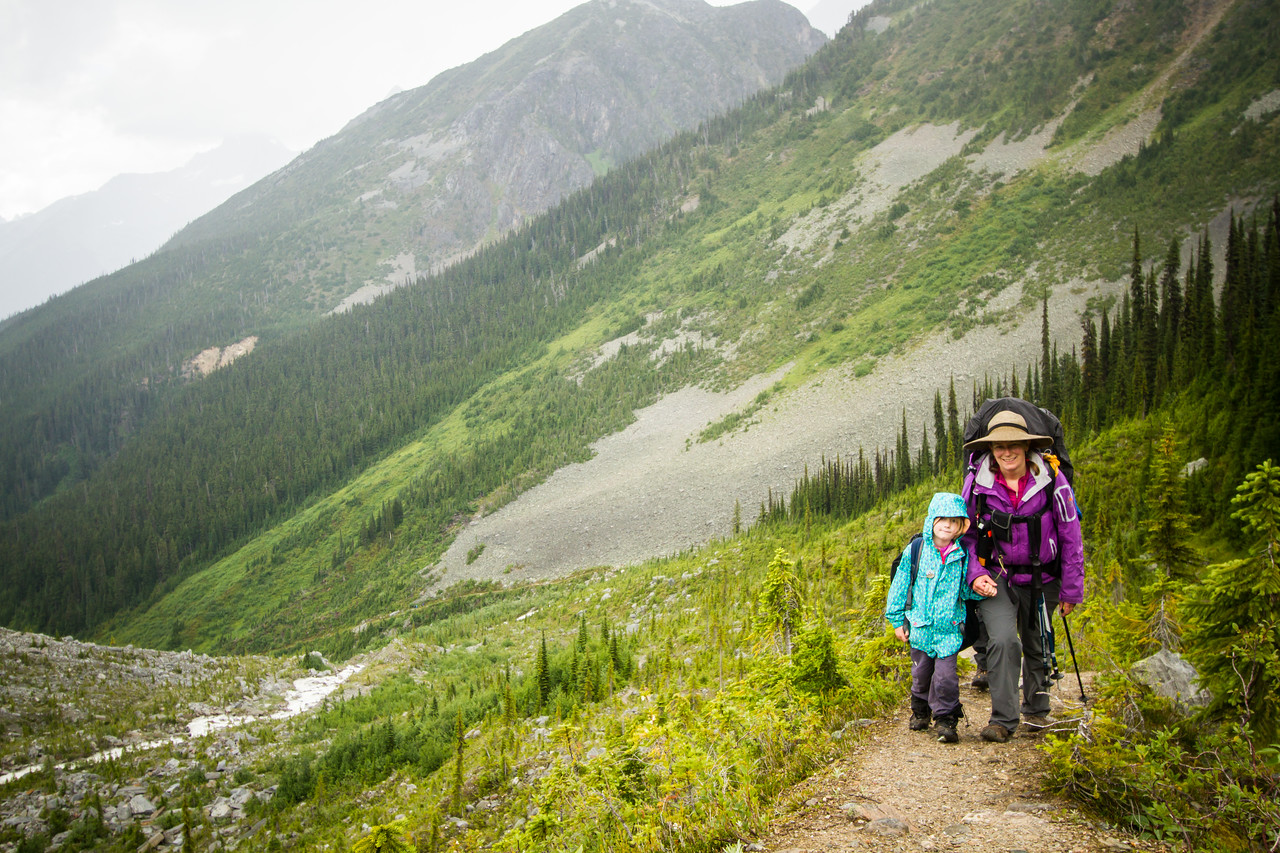 It was good incentive to power our way up the steep moraine though!

The kids rocked it – although there were many questions about when we’d be able to see the hut. Asulkan is what we’ve now dubbed a ‘Hidey Hut’ – because you don’t see it until you’re basically there. 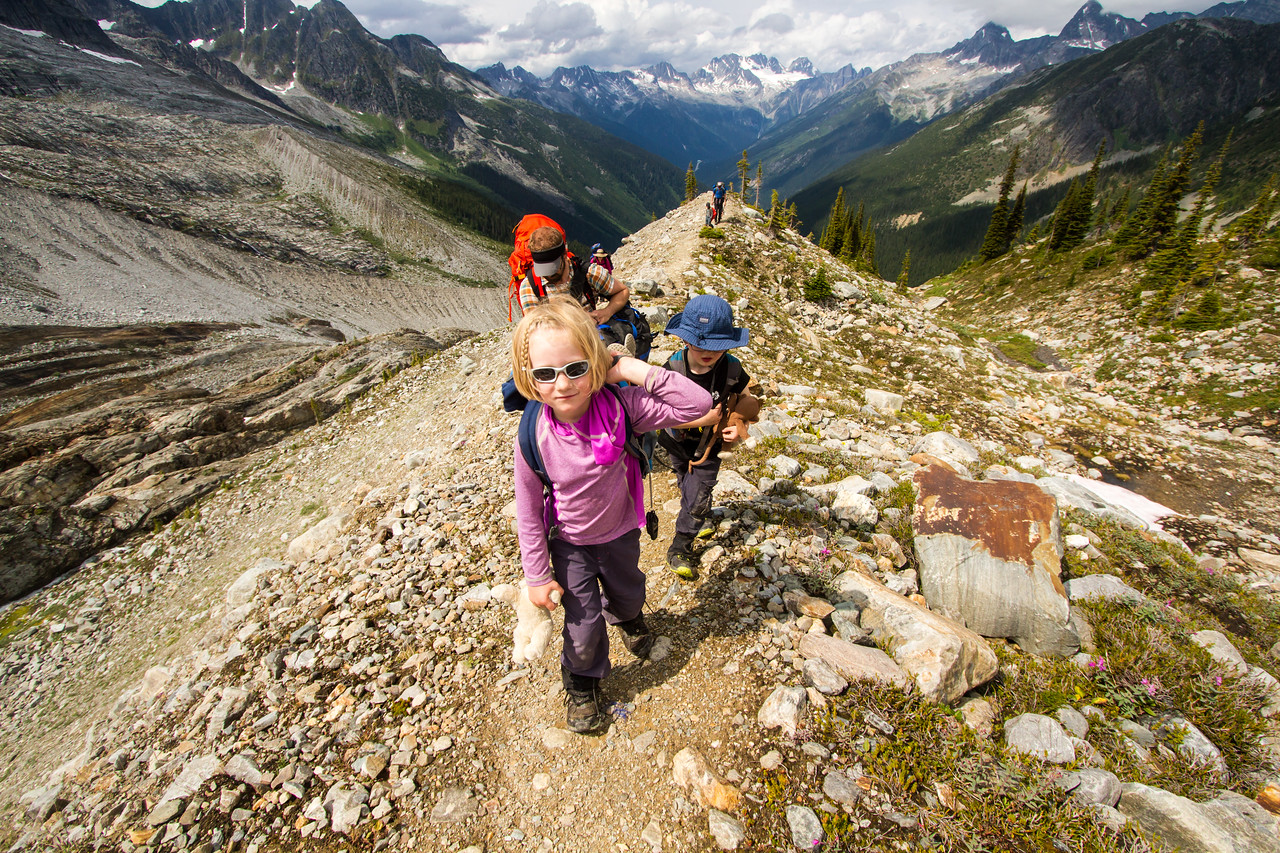 Just before we got to the hut there was a huge snow patch for some sliding fun!

And then, hut time! We settled in, then wandered down to the stream and watched a fat looking ptarmigan stand up to reveal three chicks hidden beneath her plumage.

The unicorn showed up again.

And then swung by the hut to visit the kids…

And as the weather turned, the kids settled in to read books, play with lego, and invent new versions of gameplay for Carcassonne.

The thunderstorms swept in with a vengeance, and there was a roaring wind and hailstorms as we sat snugly in the safety of the hut. Getting the kids out to the outhouse before bedtime was something of an adventure, as we raced through the wind and hung on tight to the small ones so they wouldn’t be swept up by the wind and blown away (ok, not actually a legitimate worry, but it was pretty windy).

The stairs in the Asulkan Hut are a little on the steep side – more a ladder than stairs. But they make for a great training facility for budding climbers and goofballs alike.

The next morning our family Â had to hike out and head into Golden, missing the second night in the hut – boo!

But first, it was time for some photos. The old standard – unicorn and children posing with Canadian flag on top of a moraine.

And then a group shot of our excellentÂ crew of three families. 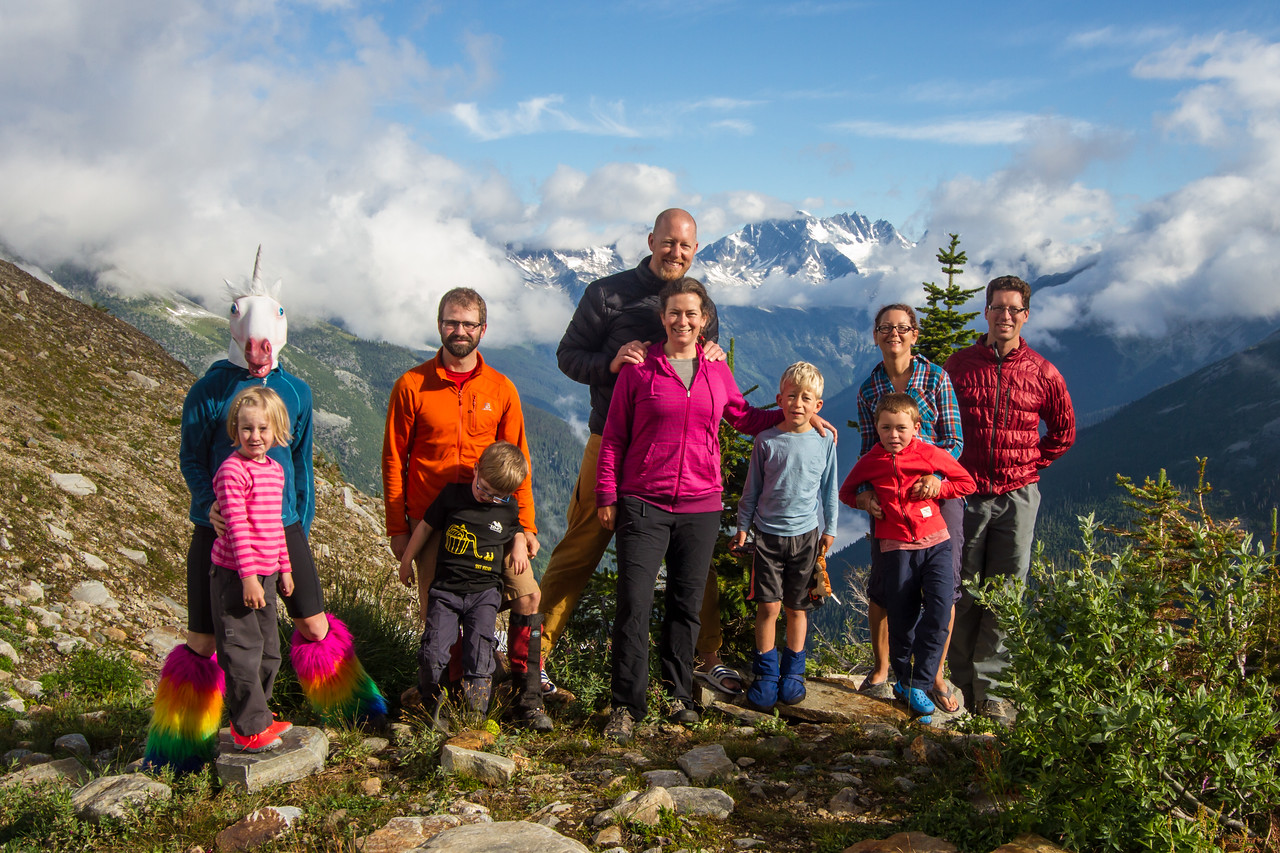 Then it was time to head downhill. We’d allowed plenty of time, but were surprised how quick the hike out was. 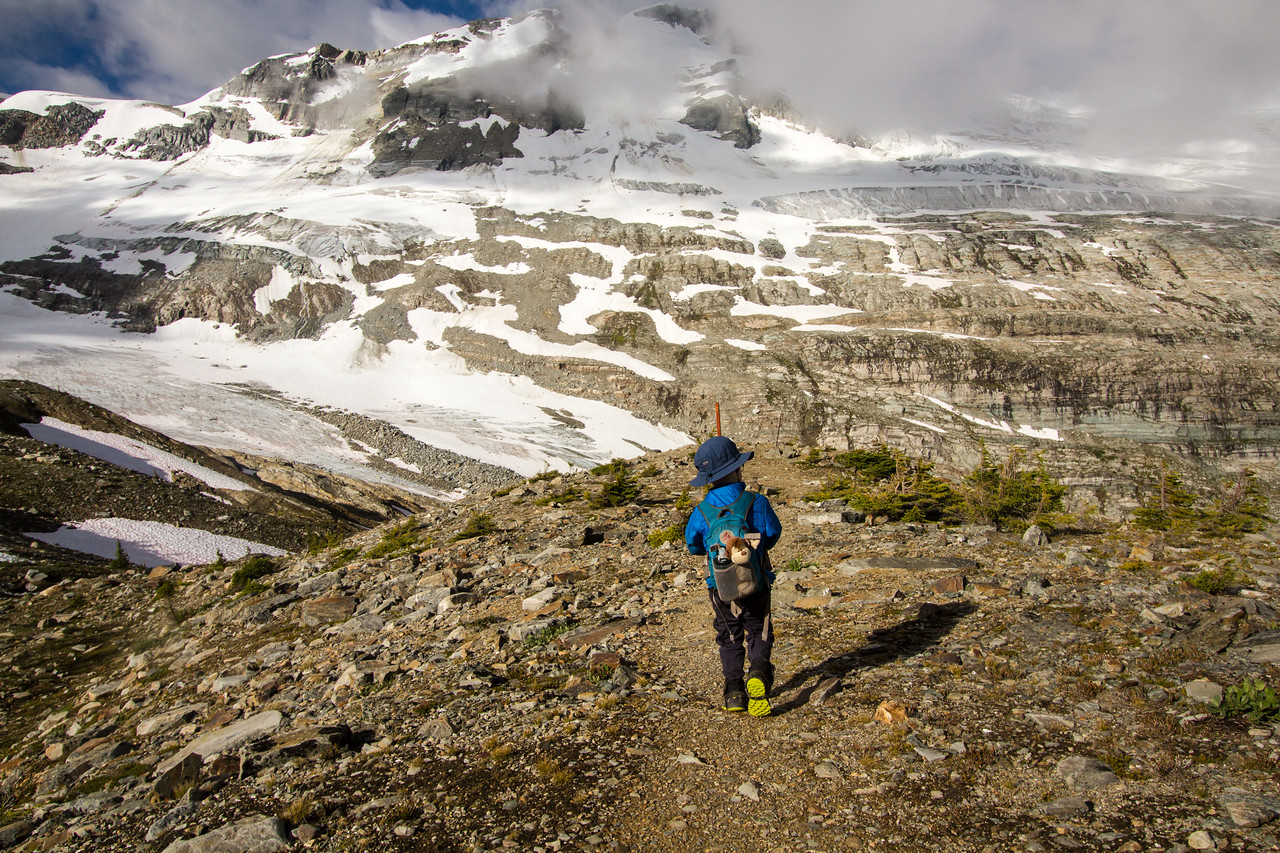 The moraine was steep, but fairly fast to hike down. Even with frequent photo stops.

The day was shaping up to be lovely and sunny.

And the boy is getting better and better at jumping.

I attempted to get a photo of my awesome hiking outfit – the rainbow fur gaiters sure do garner a lot of attention, and brighten up cloudy days.

Down into the green overgrowth, we started yelling out for bears, and spying marmots. I’ve never hiked an area with so many marmots, we saw more than ten of them in just a few minutes. 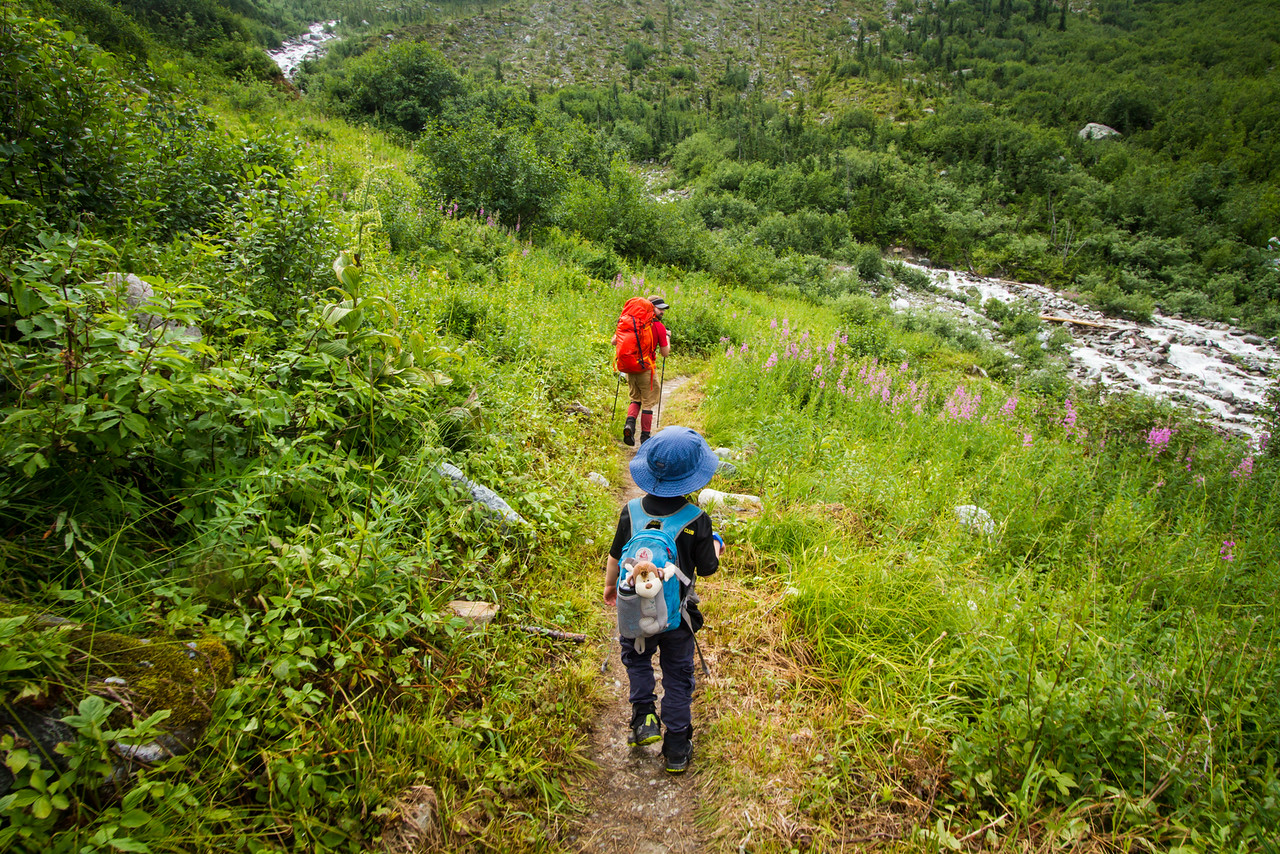 On the way out we stopped to admire some of the ruinsÂ of Glacier House, one of CPR’s first great railway hotels (eventually closed after the railway was rerouted due to avalanche hazard). Oh to be one of the mountaineering folks from the early 1900s.

Distance: 7km one-way
Elevation gain: ~850m on the way in
Time: 4hr45min in, 2hr30min out (total times, including lunch breaks and such)