Camping at Ribbon Lake was another cunning plan of Tanya’s, come to fruition while my mother was visiting. Â A bunch of us had booked camping sites up at Ribbon Lake, and four families gathered in the parking lot to hike in together.

The Ribbon Creek bridge is much further away when you’re hiking instead of riding the High Rockies trail. 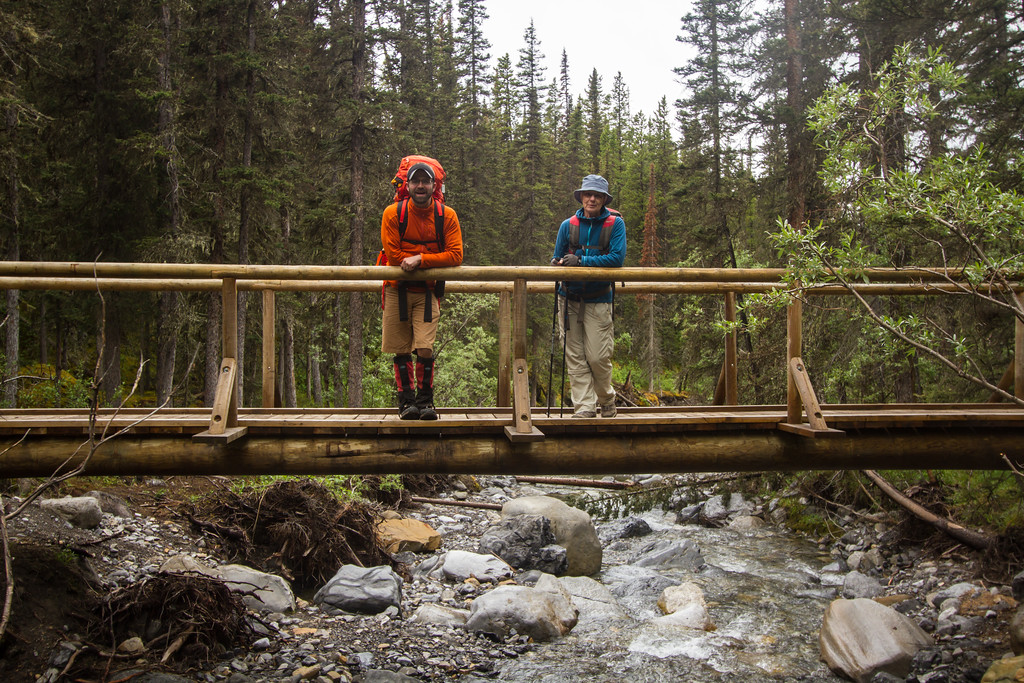 There were four kids along in our group hiking in. All good little hikers, but enjoying the stops to check out the river and throw rocks into them.

Our lunch stop was at the scenic circular waterfall. 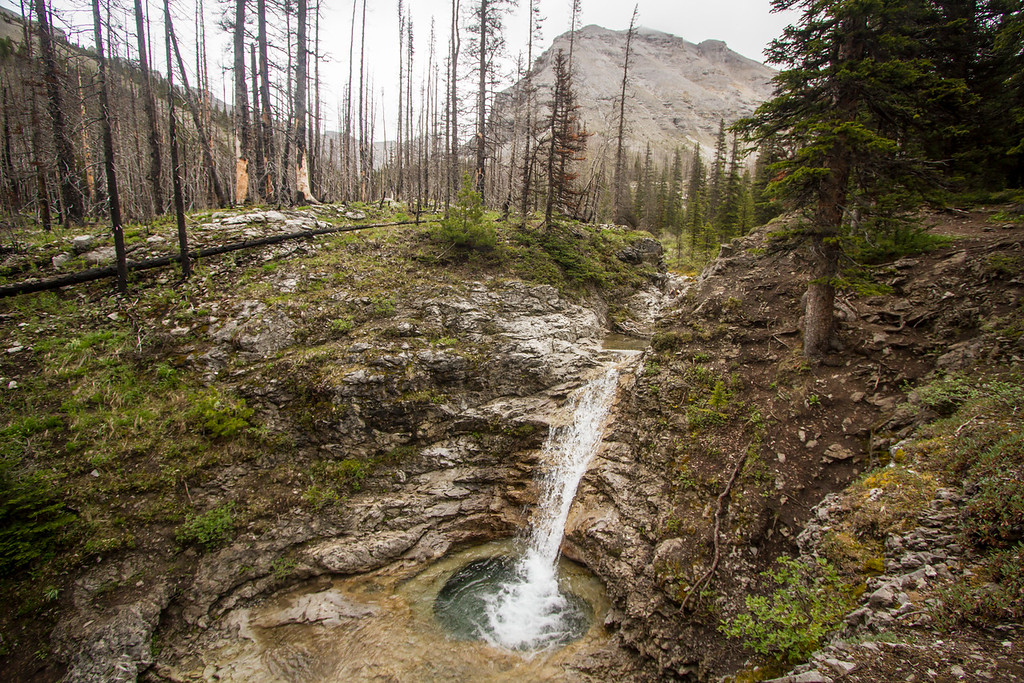 After a break to feed the starving masses, we wandered up through the burnt trees, gradually chatting and get to know each other. We knew Tanya & Mark of course, but hadn’t met the other two families before.

Almost everyone was in photo approved colours though!

As we climbing up above the treeline, we found a patch of snow! This also had to be played with. 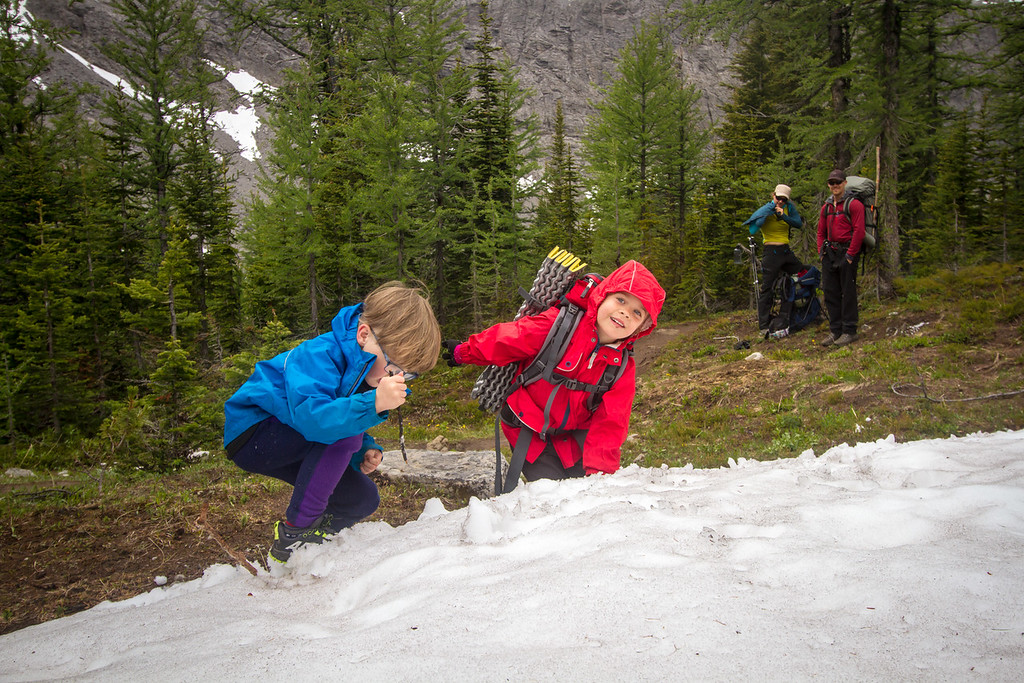 And then a boulder for the kids to play on…

Goofballs hamming it up on top of the boulder… 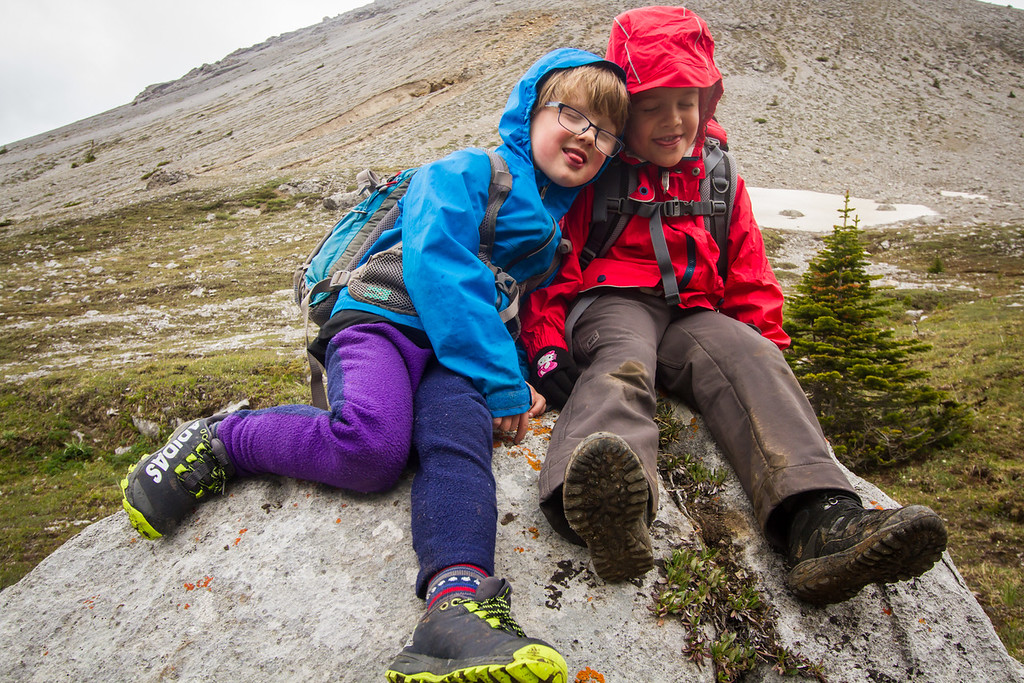 The way up and over South Buller Pass was still a little snow bound, but easy to hop across, especially when you weigh under 25kg.

I always seem to end up dragging Mum out into snow, no matter how hard she tries to come in the middle of summer when there can’t possibly be any snow. Â She’s a very good sport about my attempts to drag her about on mad adventures though.

The final section of scree up to the pass was clear though, and there was some scrambling on the rocks instead of walking on the trail.

We didn’t hang out for too long at the pass – it was windy! But down below we could see Ribbon Lake. We started descending steeply.

More snow! We didn’t do much glissading, but it was tempting.

This part of the descent was a little spicy. There was a steeply angled strip of snow that led into the creek. A slip would have led to coldness, wetness and possible injury. We took it carefully.

No-one slid into the snowmelt creek though! And we were marching across the bridge and alongÂ the final stretch through the trees.

We set up at camp, finding some empty tent pads, and then the boy got another lesson on tying the laces on his new shoes. 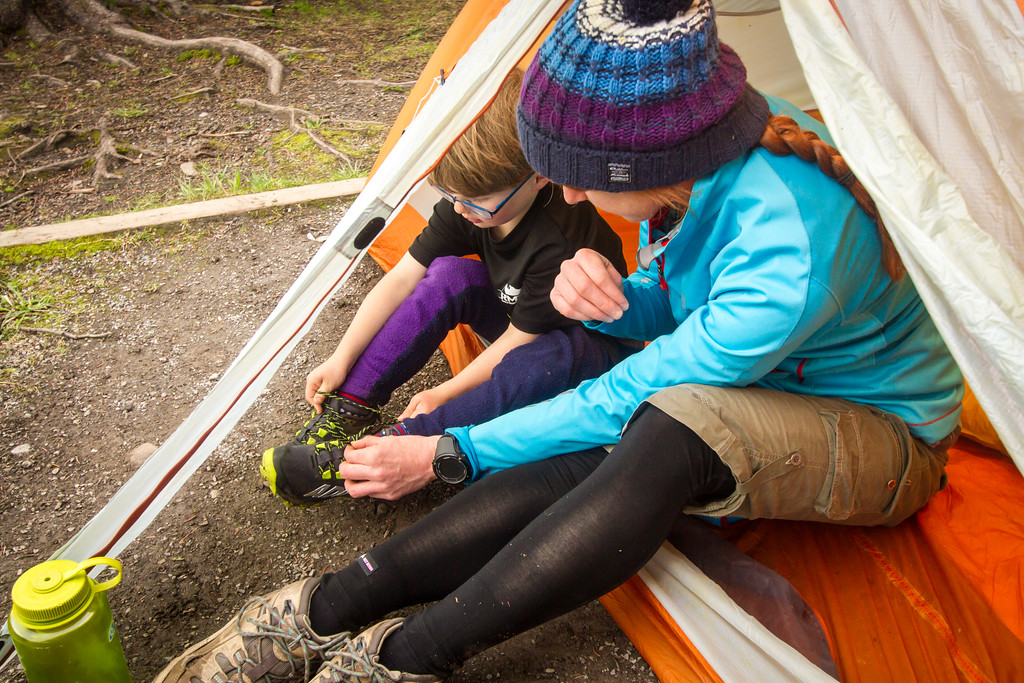 We met up with the other family there, and started cooking dinner and playing games. 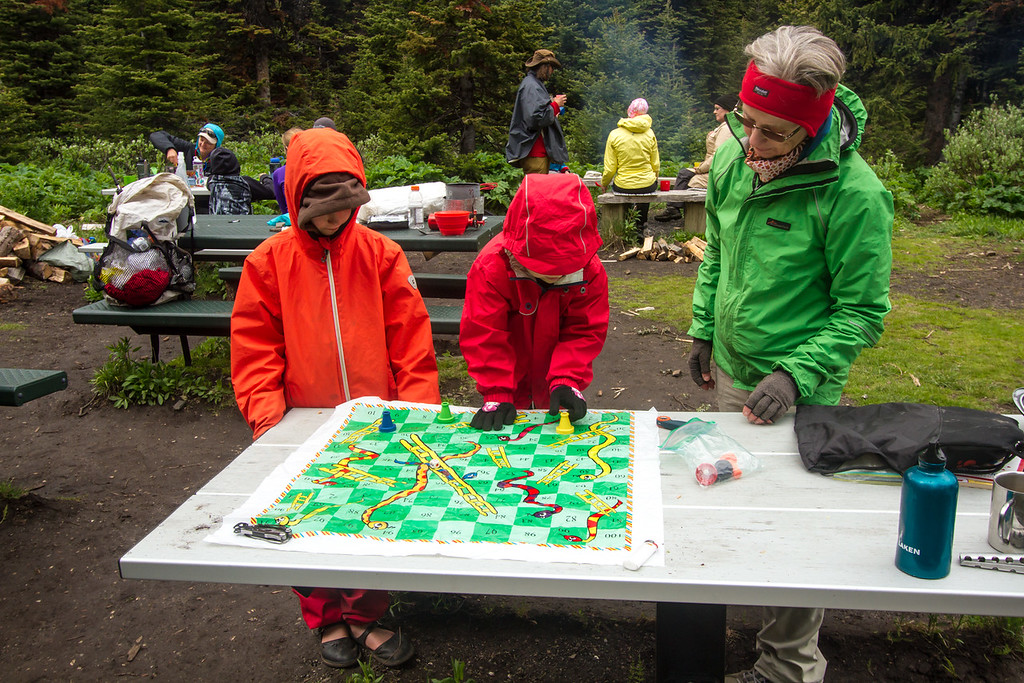 Then we sent the menfolk to go and wash the dishes in the cold cold lake so we could take photos of them.

Sitting around the campfire, we read stories, ate dinner, and played Catchphrase with a neat little electronic gadget someone had brought along.

I ended up in bed fairly early – I started off there trying to get the boy to sleep, but I think I fell asleep before him.

The next morning the kids were up building forts out of the campfire wood collection – or really, just inhabiting the forts that had already been built.

Meanwhile the smaller kids brought in an engineering consult as they tried to construct a smaller house out of wood. The big bad wolf would have had them in no time. 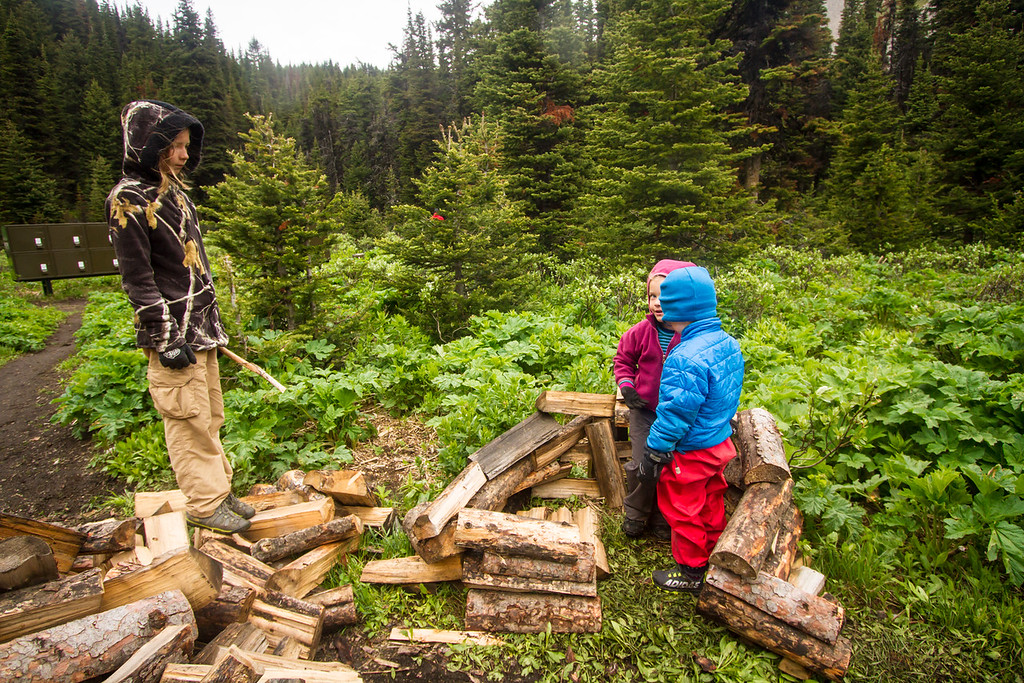 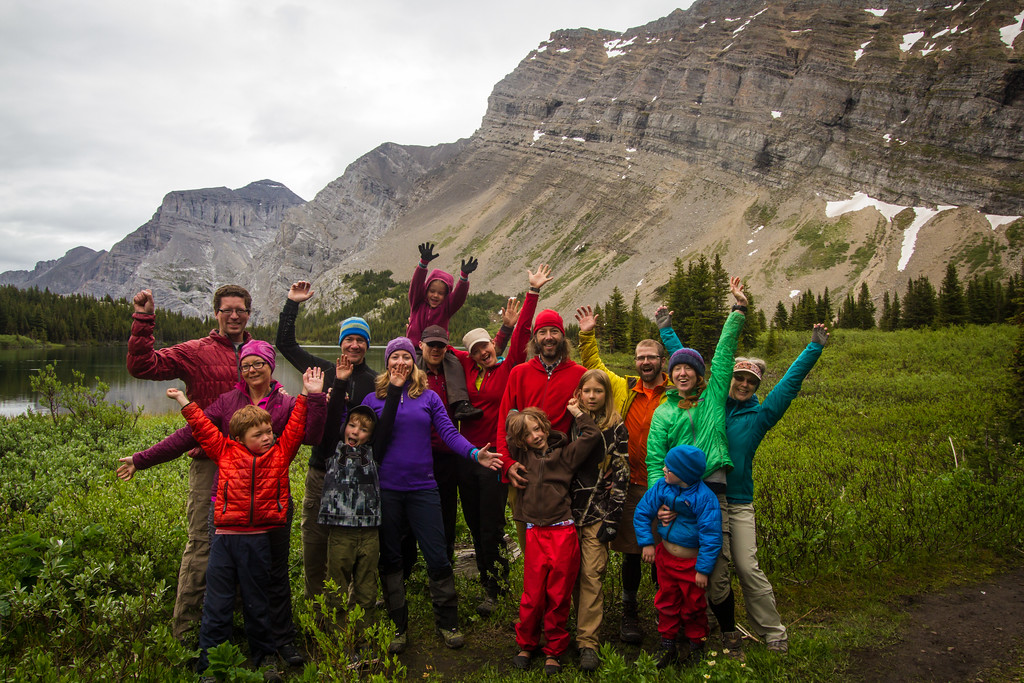 Another fun camping weekend! And it didn’t rain that much, woo!