For the last couple of years I’ve raced the Salty Dog* in a pair. This year I was worried about my knee, and rather than risking letting down a team mate, I decided to just sign up solo again.

I was really looking forward to the drive all the way back out to Salmon Arm after we just drove back from Squamish six days earlier (Note – I was not actually looking forward to this). But at least I had a road trip buddy! Kat and I were racing in the same category, as I had managed to convince her to sign up for the race without her actually realising what she was signing up for (she trusts me?)

We’d arrived in Salmon Arm, checked into the Podollan (because we were being fancy, and not camping for once), and were cleaning our bikes. And that was when I realised the back wheel was wiggling about in a way that didn’t seem good to me.

I borrowed a cluster tool from some of the other Salty Dog racers milling about the place, it failed to help, and Kat phoned up Skookum Cycles for me – they were technically closed, but would try and help me out if we could get there within five minutes. We threw the bike in the van and hurtled downtown.

The lovely bike mechanic dismantled my wheel, said something about some threads being a bit stripped, cleaned it out and re-assembled it, saying “It should be good for tomorrow, but you should get it fixed afterwards.” Phew!

The race summary basically goes: It was warm and dusty, I did seven laps. My rear wheel had been getting a bit loose, and I’d been re-tightening the thru-axle thingy every couple of laps. But on the sixth lap the lever on the thru-axle flew off and I couldn’t find it. I took the descent easy, then had another hunt for the lever on my seventh lap. I still couldn’t find it, and my rear wheel was starting to feel a bit off. My gears were skipping a little. I was remembering that time in Singletrack6 when my wheel actually fell off.

When I made it back to the tents, I took everything into account, and decided not to try for an eighth lap. I found out afterwards that I’d passed the leader in my category (Sport <40 women) at the top of my last lap, and clinched the victory on the descent. Woo! Meanwhile, Kat had polished off six laps in her first MTB race, ending up in third. 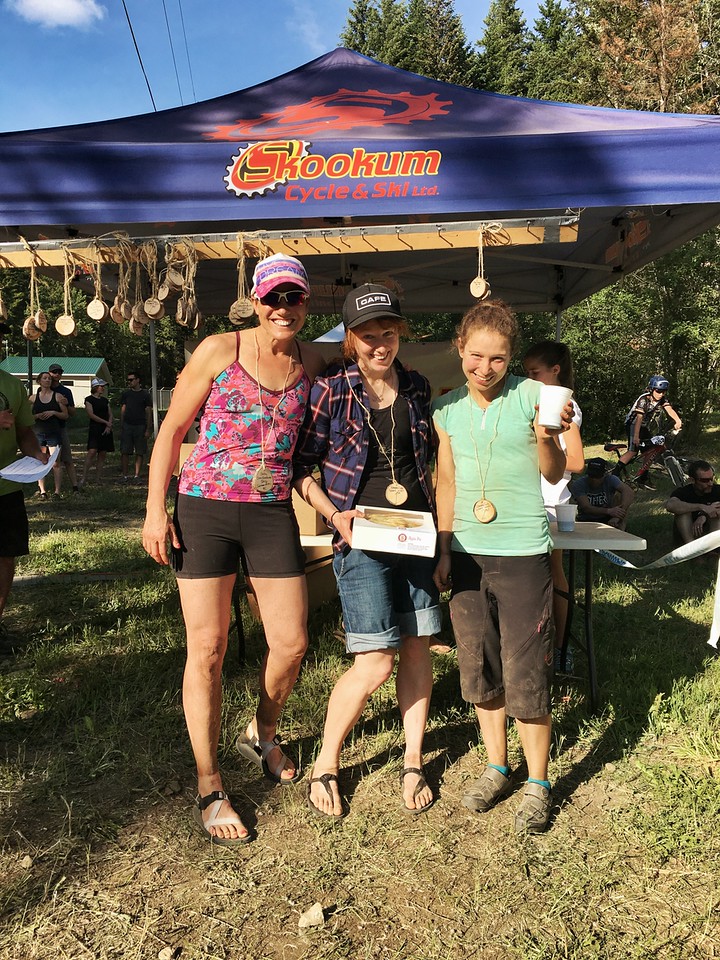 This really means that I’ll have to sign up in the Expert instead of Sport class next time I do something like this – although now I’ve finally mastered one-finger breaking, I’m closer to feeling like less of a fraud if I call myself an expert (now, to just master turning with my feet in the right place)

*Mountain bike race where you ride laps of an 11km course for six hours, commonly ridden by many Canmore folk as a season starter.