With my knee being injured still, I can’t skate ski. As a result, I’ve turned to classic skiing in desperation. And it’s not all bad. But with all the classic skiing I’ve been doing, I decided to sign up for the Lake Louise Banff Loppet, which is (for 61 of it’s 72km at least) a classic ski. 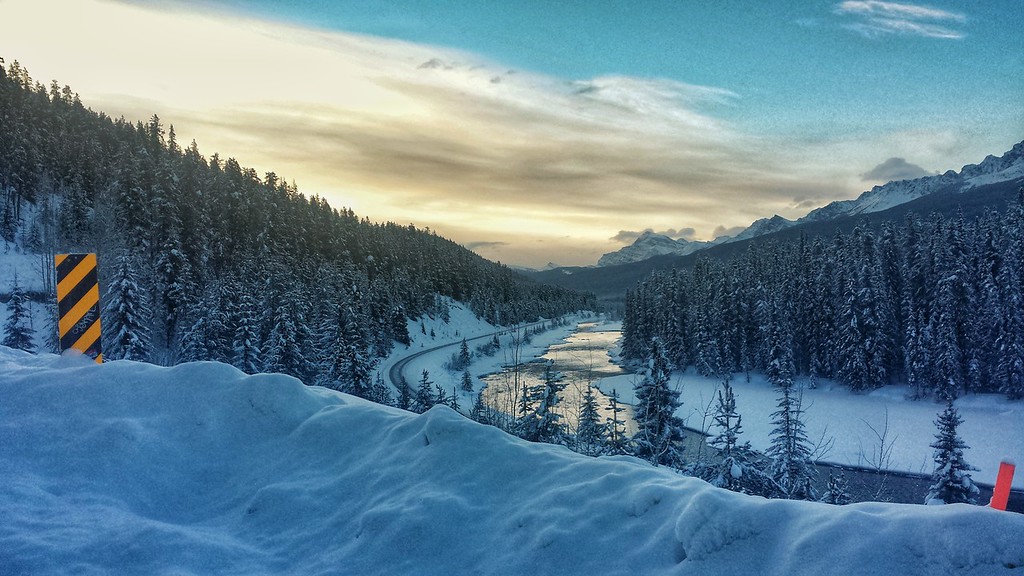 Starting on Lake Louise before sunrise, you spend the first couple of legs skiing into the dawn, and it’s amazing. I started off right towards the back of the pack, and gradually picked my way forwards as we cruised downhill into the sunrise on lovely easy tracks. We popped out above Lake Louise, all lit up in the darkness, the sky gradually lightening. The terrain flattened after that, and I was overtaken by people older than my parents, who ski with immaculate technique.

On the first leg as I was coming down from Morant’s curve I skied over gravel and gouged my skis – my precious skis! :( Overall, leg 1 (at 21km) felt relatively easy, and with a good chunk of downhill on good tracks, it’s not as hard as some of the shorter legs that come later in the day.

Leg 2 (10km) was cruisy, easy tracks, mostly easy skiing, over in no time. Leg 3 (13km) was challenging. I started to bonk after 30km, having trouble eating enough. I found it hard to eat with poles on; having food shoved in my waist belt didn’t really help me, as I never wanted to slow down to get it. I was constantly back and forthing with teams, and with most of the course being singletrack, overtaking seemed to require considerable thought and effort. There was some challenging terrain on this leg, and worgly hills where I crashed at least once, and nearly crashed a few more times.

A magical support angel gave me a gel at the end of the third leg though, and it acted like rocket fuel for the short (6.6km) fourth leg; up and over the Hillsdale road split, from Johnston Canyon campground to Sawback picnic area. I hadn’t bothered to re-wax, so things were a bit slippy on the ascent. The descent was a spicy balance on an off-camber bank of ploughed snow – and just as well I hadn’t put new wax on as I would have lost it all anyway. Double poling to the Sawback checkpoint took some effort, with soft deep snow, very little grip wax left, and tired, tired arms and legs.

I’d borrowed someone else’s support crew, plus with a couple of other teams filled with people I knew, I ended up with a reasonable little cheer squad to keep my morale up as I struggled onwards, leg after leg. The first 30km isn’t so bad. And even the next 20km after that is kind of reasonable. But after that my legs started to fade.

So now I was at 50km. I had my longest pit stop, breaking to quickly put a couple more coats of 45 on, then headed off. Hard work at this point, my arms seizing up, and my legs too. Slowing down. I started to have trouble convincing myself to hold speed. I dreamed of having some music to listen to, but couldn’t be bothered taking the necessary break to set up my headphones. Some rough skiing on leg 5 (10km), but some of my favourite moments on the course. Through aspens, along the Bow River, and across the swamps. Beautiful blue skies, snow-capped mountains, amazing. Hard skiing, hard to balance with tired legs. It was a warm day, but with beautiful clear blue skies that made up for the slow warm snow.

Then it was skis off to hike up to the final checkpoint, and on to the last leg (11.4km). Marching across the Sunshine overpass, eating a granola bar, shaking my fist at the relay skiers running across like little ski-boot-clad gazelles. Some of the solo skiers had skate skis and boots stashed at this point. I didn’t, as I wasn’t planning to skate, as it hurt my knee. But I was so sore and tired that I resorted to skating with my classic skis, on the grounds that all of me was going to be sore anyway so my knee may as well join the party. It felt so obnoxiously slow to classic ski at this point, and I was aching to use some different muscles. (Like being faced with a messy floor, and opting to use a nice mop instead of licking it clean).

It’s really hard to be able to balance well enough to ski on challenging terrain once you have 30km+ on your legs. I crashed once because I just could not balance, and came really close to crashing a few more times.

But then, finally, I was on the Bow River. And there were families out and about. I was in the outskirts of Banff. I could smell the finish line. And then I could see it. And then I skied through it, and people cheered. None of my crew were around though, and so I huddled and ate until they made it over the finish line too. Joy, I could sit down!

Then drive up to the Banff Centre for the presentations. A hot shower that felt amazing. Then as much meat, cheese, wine and carrots as I could eat. Awards were handed out, which I missed out on by a long margin, and then failed to get a draw prize too. I stretch, and have interesting exhaustion-fuelled conversations. This was a good day.