We saw a fox today!

But first, packing up camp, I felt my fingers spiking and blistering from sun rash. My skin is ridiculous. I rolled my eyes at it, and was sure to put on my long gloves.

We took the coast B-Road to Ashaig. Having a brief stop at the village store, we snacked while watching a beginner group of kayakers heading out on a guided trip. Finn loudly proclaimed: “Look, they’re sailors Mama!”

Then we cycled onto the uninspiring A-road to Glenfinnan. There was a cycle path for part of the way, but a great deal of the way it was just cycling on a shoulder.

In Glenfinnan we admired the monument, the viaduct, the gift store, and the prohibitive cost of passing urine (actually it was only 20p, but still).

We lunched at a picnic table and admired the tour buses piling in, then cycled north and up into the quiet Glenfinnan Estate. 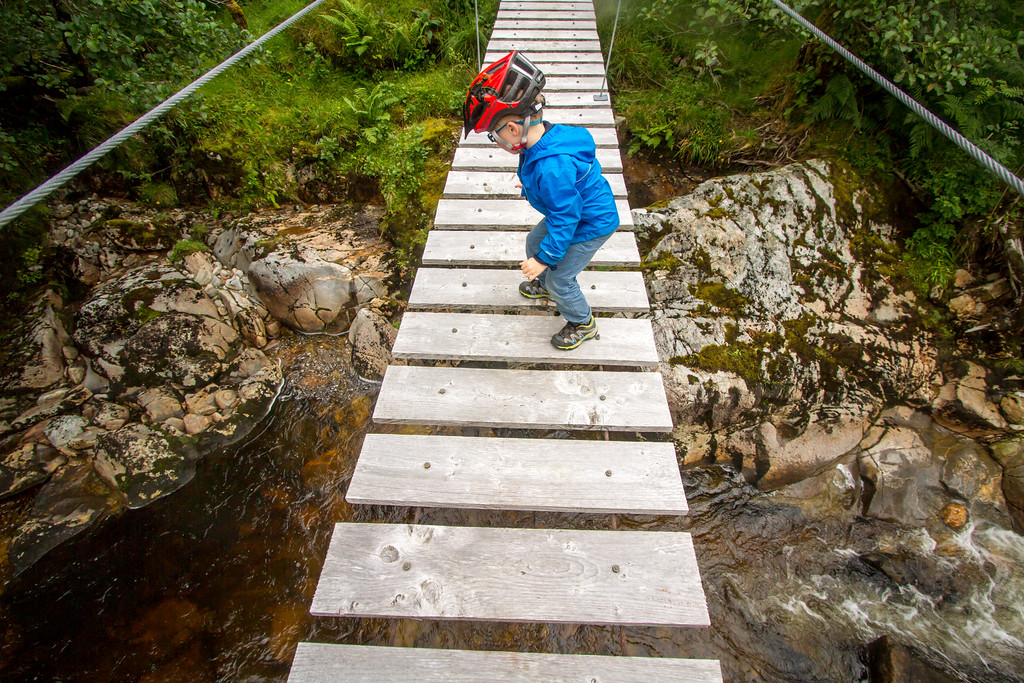 We reached the bothy early in the afternoon, and there was some debate about whether or not to continue, or stay the night. But the bothy magically had electricity, and the weather forecast threatened rain, and we weren’t sure of the path ahead. And so we stayed. 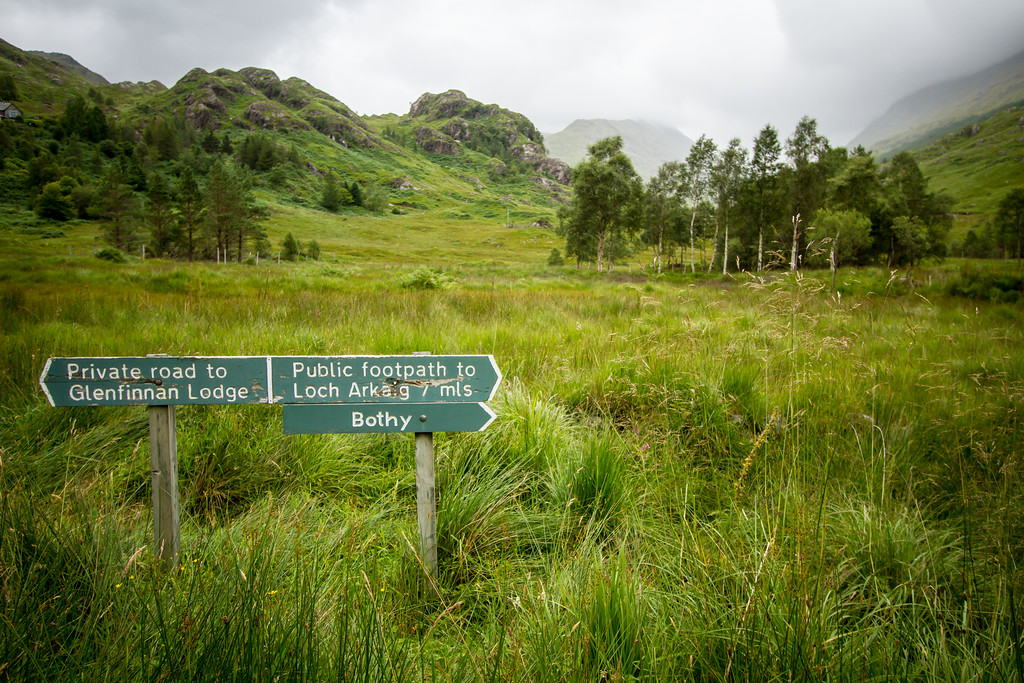 It was our first bothy, and was a bit reminiscent of some of the high country huts in Australia. With two small windows, graffiti, dirty wooden floorboards (and no broom), a smell of smoke, old chairs, camping tat, leftover items (a bottle of ketchup, cheap whisky, fuel that won’t work with out stove), and a guest book.

As a result of staying, we ended up parking the bikes at the bothy and going for a walk. And on the walk I found a sign for a munro. I headed back to the bothy to resupply, then off for a quick evening hike.

The munro in question was Sgurr nan Coireachan (3136′). The trail was boggy, and I was soon disappearing into the clouds. It felt spookily quiet, with black bogs lurking. I expected to see faces in them, trying to lure me in to peril and doom.

My feet were soon wet. Even with jumping over the puddliest of puddles and the muddiest of bogs, everything was wet, it was impossible to avoid. I was marching to the top as fast as I could, worried about the threatened rain, about Alex worrying, about the people in the black bogs getting me.

It was a lovely little hike though, although not much of a view with the clouds so low. The rain never came, and the clouds cleared a little as the sun was lowering, opening up wonderful views out to the ocean to the west. I didn’t see another soul the entire time I was out, although on the descent I did see a shovel and woollen cap abandoned by the side of the trail, which also seemed spooky at the time.

I scampered back down my munro in reasonable time, running when I could, enjoying the sensation of flying over terrain on my feet. My injured knee has stopped me running as well, and I hadn’t realised how much I missed it. 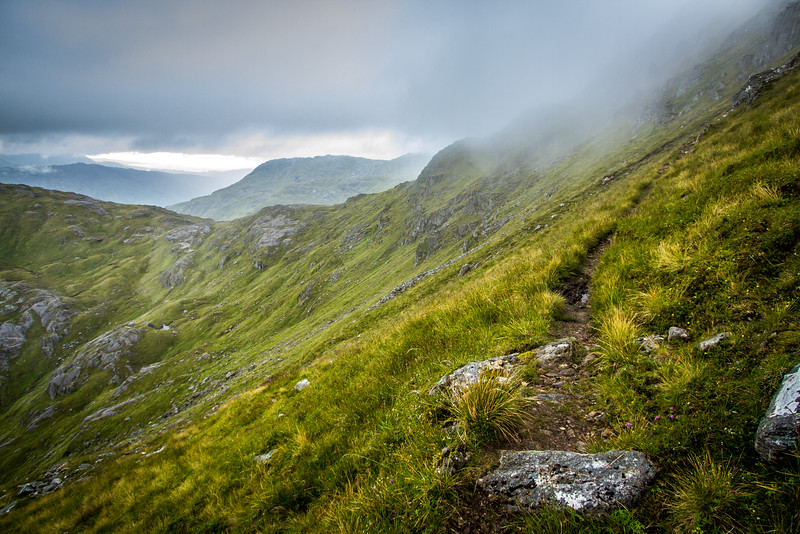 Back at the bothy was a freshly cooked meal in one of our old travel worn pots. Ah! I tell the menfolk of my adventures in the mountains, and we snuggle in the bothy, our thermarests on wooden benches, phones plugged in the charge with the inexplicable electricity. Actually, not wholly inexplicable – apparently it just came down to the fact that there needed to be a minimum number of dwellings to bother servicing an area, so the bothy was included in the count for the valley.

The next day dawned warm, clear and muggy.

We’d already decided against Plan A – which was to continue up the valley on a trail of unknown quality, and bash through to connect through with trails beyond, also of unknown quality, with an unknown time until resupply. We just didn’t have enough food with us, and the Isle of Rum adventure combined with my munro hike had wisened us up to just how boggy and slow a ‘trail’ can be.

Plan B was to ride out to Fort William on the A-road. Also with its own risks, and sadly far less adventurous.

First we stopped quickly by the Glenfinnan monument and the Harry Potter train bridge again, this time for photos!

The haul to Fort William from Glenfinnan was not terribly fun, with a busier-than-we’d-like road with no shoulder. Not as bad as Latvia, and most people were pretty good about giving us space, but we were wondering if we would have been better trying our luck with the boggy ‘shortcut’ alternative.

As we arrived in town, Finn got the chance to watch his first lock opening & closing, which he found entirely fascinating.

That didn’t last long. As soon as we got out into the open we realised it was far too windy to be heading up into the alpine. I was blown off my bike! 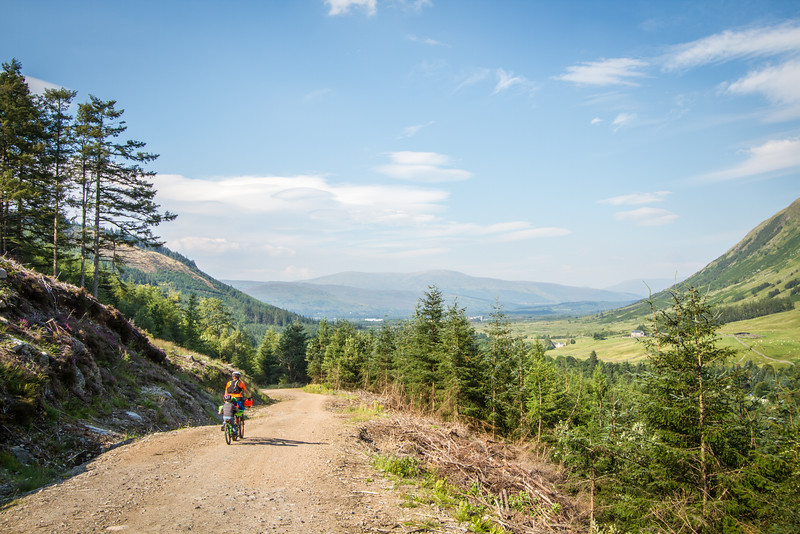 We backtracked into town, then headed out along the canals. Flat, boring and predictable, good old canals. Past Neptune’s staircase, along the locks, we made some fast and easy kilometres.

Then just as we were thinking we’d like to stop for some dinner at least, and maybe think about finding somewhere to camp, we reached Moy Bridge.

We were just hoping to cook dinner on the picnic table there, but as I was reading the information pinned up on the board, I realised it was an informal camping spot too. Woohoo!

We set up to camp on a civilised and sheltered patch of mown grass, with lovely views – and watched as helicopters rescued climbers who were caught out by the weather on Ben Nevis. 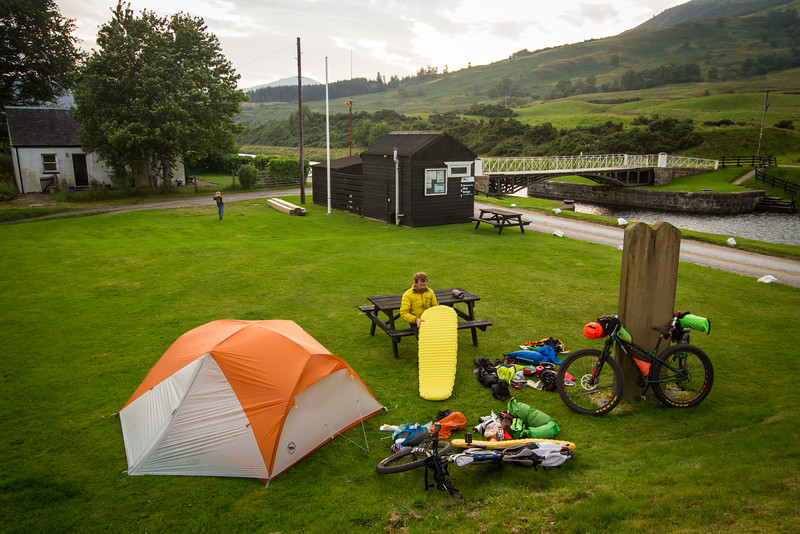