The rain has stopped. The air is still and moist, and the midges are swarming.

Our wet tent packed away, we cycle down to the ferry terminal. Onboard the ferry, bikes are lashed to a railing, and we trudge upstairs to break into our Nutella for a civilised breakfast at an actual table. 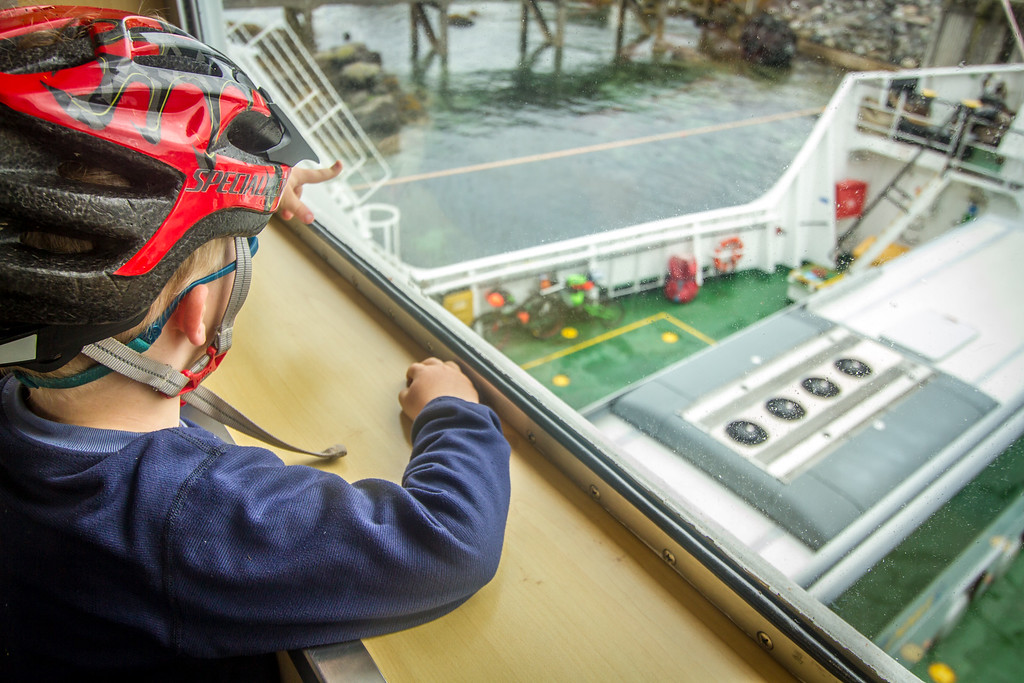 The ferry takes us to Mallaig. We aren’t sure where we’re going next, it will depend on where we can get to. Alex finds a ferry going to Rum, but we’ll have to cycle down the coast a little to get to it, it leaves from Arisaig.

There’s time to do a quick grocery shop, then we hit the road. We opt for the A-road, which is wide and quiet with a good shoulder. The B-road would be more scenic, but there isn’t time. In Arisaig it’s straight to the ferry terminal, buy one-way tickets to the Isle of Rum, then jump on the ferry.

Unlike this morning, this one is not so much a ferry as a small sight-seeing boat. It carries us, some daytrippers, and some locals off for a few days of hunting. Our bikes are dismantled and tied to the roof, and we sit watching the view from the back of the boat as we bounce along past seals and seabirds, until Finn falls asleep on my lap. 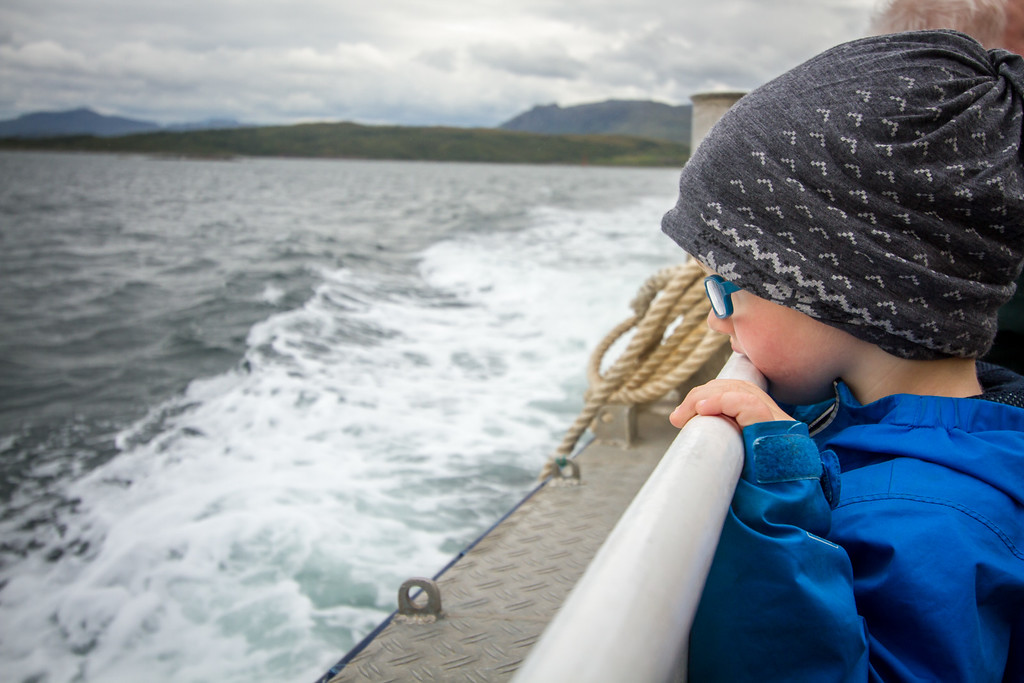 We pull up at the dock in Kinloch, Rum. The large jolly tweed-wearing Scotsmen with their large jolly Scots sons disembark first, along with their gun cases. The daytrippers dissipate quickly. We’re left alone on the dock, reassembling bikes.

Into Kinloch, we wander past a small field with horses – Finn wants to know why they don’t have horns on their heads. He’s baffled by my inability to keep a straight face, as I attempt to explain to him the difference between unicorns and horses.

The Isle of Rum is one of the Small Isles, and its thirty or so residents all live in Kinloch. It’s been inhabited since around 8000BC, with neolithic folks, early Christians, Norse, various Scots clans, and finally crofters. The crofters lived here until 1826 when they were largely packed off and sent to Cape Breton, Nova Scotia so a man could turn the island into a sheep farm. That failed miserably, and the island was eventually sold to the Marquess of Salisbury who converted it into a sporting estate, which eventually had a castle built on it (fourteen under-gardeners worked on the grounds and were paid extra to wear kilts). It was finally sold to Scottish Natural Heritage, to become a national nature reserve.

A very wet nature reserve, with an average annual rainfall of 120 inches. 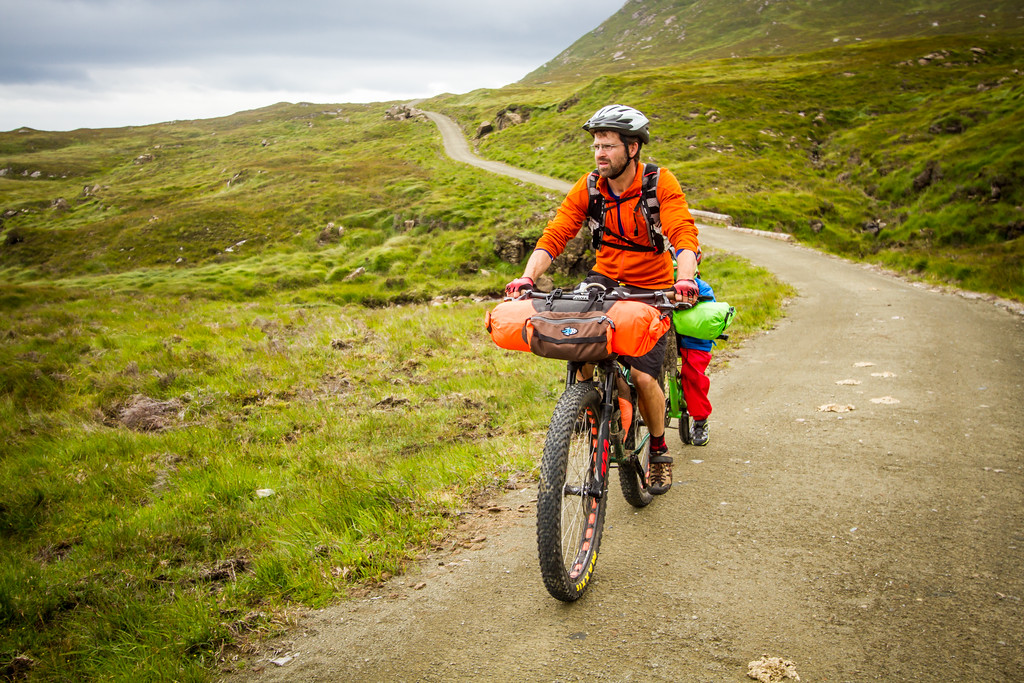 Riding out of Kinloch, we don’t see anyone else for the next 24 hours. It’s wonderfully deserted. We pedal first along the dirt road and then start pushing our bikes up the steep and boggy path. The plan had been to see if we could get to Dibidil Bothy. It starts to look unlikely. Without Finn, we would have more of a chance, but his trail-a-bike makes everything harder, and Finn himself is very mistrustful of this boggy ground after the incident in Glen Affric. It’s slow going, and very wet.

We watch a group of red deer, as we make our way up to the saddle that marks the middle of the Isle. From here we can see outÂ to the ocean on both sides of the island, and decide it’s as good a place to camp as any. It’s cloudy, with patches of rain, but there are glimpses of blue sky around. The wind is light, and the weather forecast is good.

We set up camp, cook dinner, and get Finn to sleep. I’ve been experimenting with trying to manage without a sleeping mat, but find I always get too cold after a couple of hours. I’m listening to the audiobook of Trainspotting, by Irvine Welsh. It’s really well read, and I’m enjoying the story, but it feels out of place in our current surrounds. 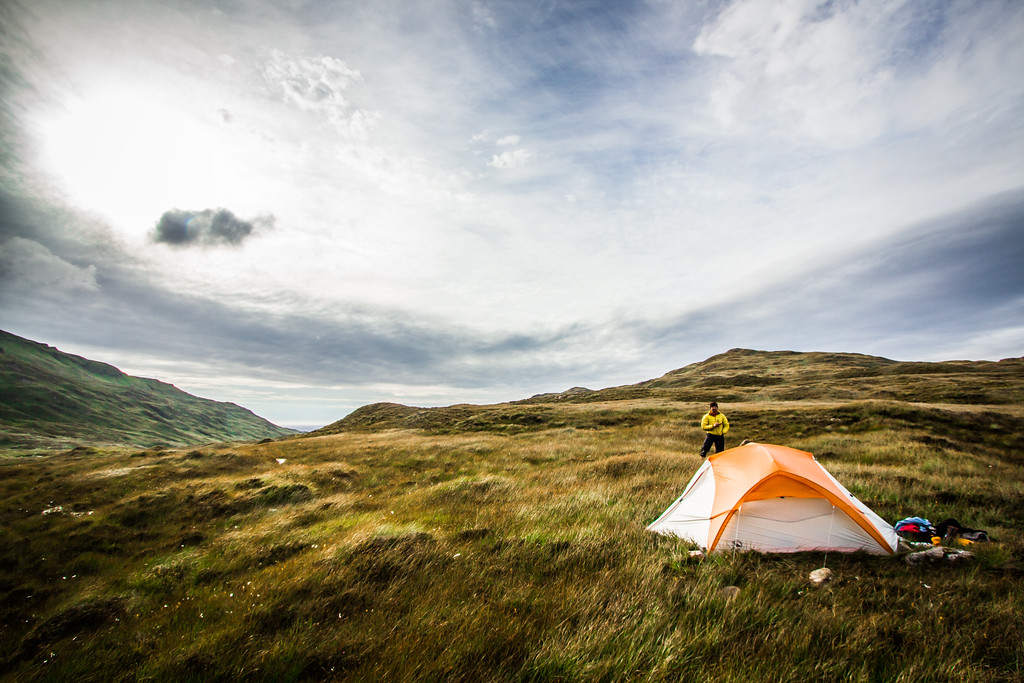 Then the wind picks up and changes direction. It starts to rain. I start having flashbacks to reading tent reviews before buying our Big Agnes Copper Spur UL3 tent – it performs poorly in windy conditions. This is confirmed as Alex and I take it in turns to sit bracing the side pole that’s dipping and bowing, coming dangerously close to snapping. On our long European cycle tour, we had a Big Agnes Seedhouse SL2 tent that had a few poles snap. They’re great tents, but the lightweight poles come at a price.

Around midnight a few pegs pull loose and the tent starts snapping wildly in the wind. Alex lunges out into the rain and starts trying to stabilise it with rocks. We debate the merits of re-orienting the tent where we are but decide the wind is too strongÂ and doesn’t show any sign of abating. Instead, we make the call to relocate. I sit up, bracing the tent, as Alex scouts out a better spot. Confirmed – we can move to the lee of the rock we’re camping above.

I get Finn dressed in his rain gear. He’s unimpressed at being wokenÂ and doesn’t want to stay put when I carry him to the proposed new tent spot.

I empty the heavy items out of the tent, we unpeg it, wait for a lull, then run it down to the new spot. Re-peg. Re-insert child and other items into tent. Although it’s wet and windy, it’s not cold at all. Thankfully.

With everyone inside the newly erected tent, I find a spot for Finn. We curl up and relax, the tent seems properly sheltered here. Although it’s far from flat ground – the four corners of the tent plunge deeply, and finding a place to sleep is more about nesting. 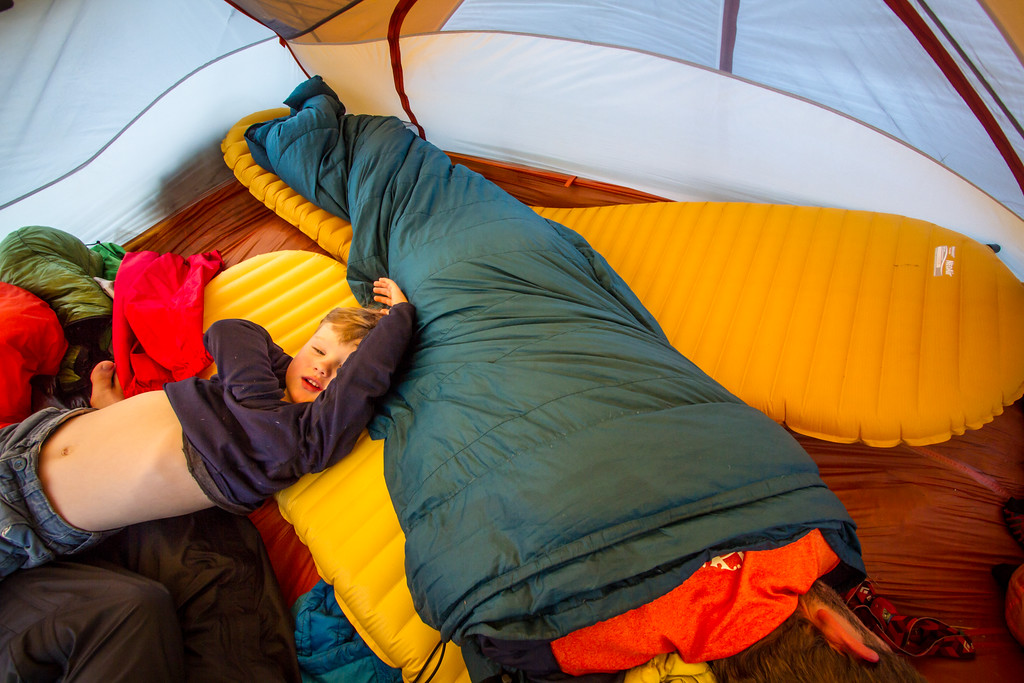 Finn largely takes the whole episode as a matter of course, just saying in the morning: “When we’re in my place Mama, we don’t get up in the night to move things.”

After packing up camp the next morning, the trail-a-bike gets a flat tyre within a few hundred metres. After that hiccup, we find it’s much faster going – a good chunk of the terrain is actually rideable on the way down. 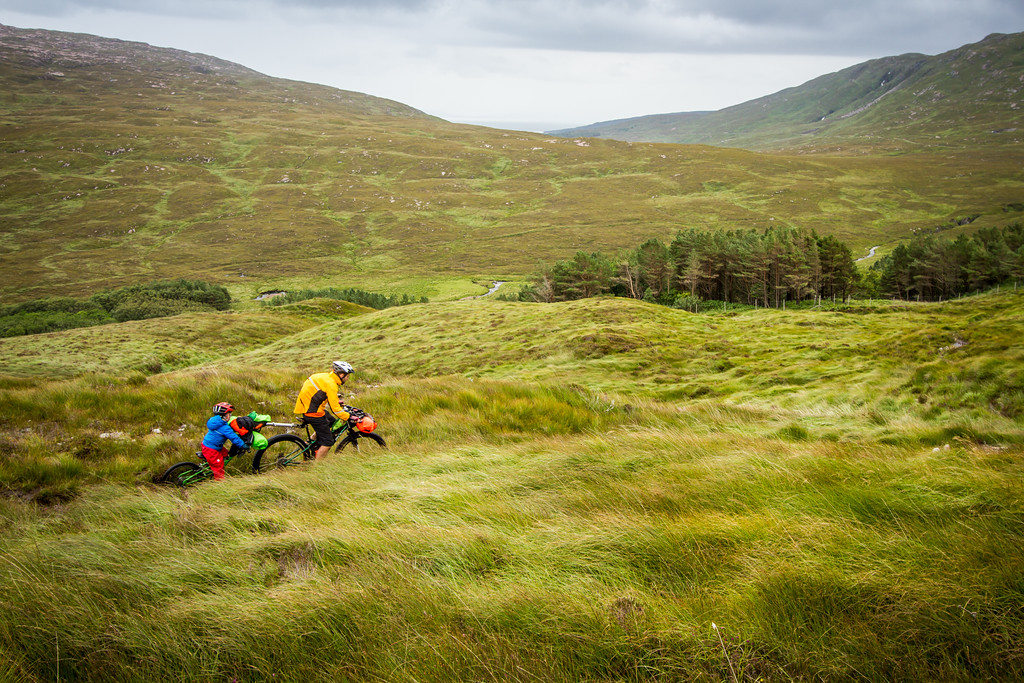 We have time to kill, so wander over to Kilmory Bay before backtracking out through Kinloch Glen to lunch in the community hall. There we sit awkwardly and drink coffee from mugs that look like they’ve been in the hall since the 1970s. I worry that the world might end and we’ll be stuck on the Isle of Rum forever. It feels a little as if time doesn’t really touch it, and perhaps the world has already ended.

The ferry is late, and I wonder again if the world has ended. But all is well and eventually, the ferry arrives and takes us back to Massaig. It’s raining, and we gleefully splurge on fish and chips before riding to Camusdarach Beach. They let us into the campground there despite being full, and we watch the sun as it sets over the Isle of Eigg and the Isle of Rum. 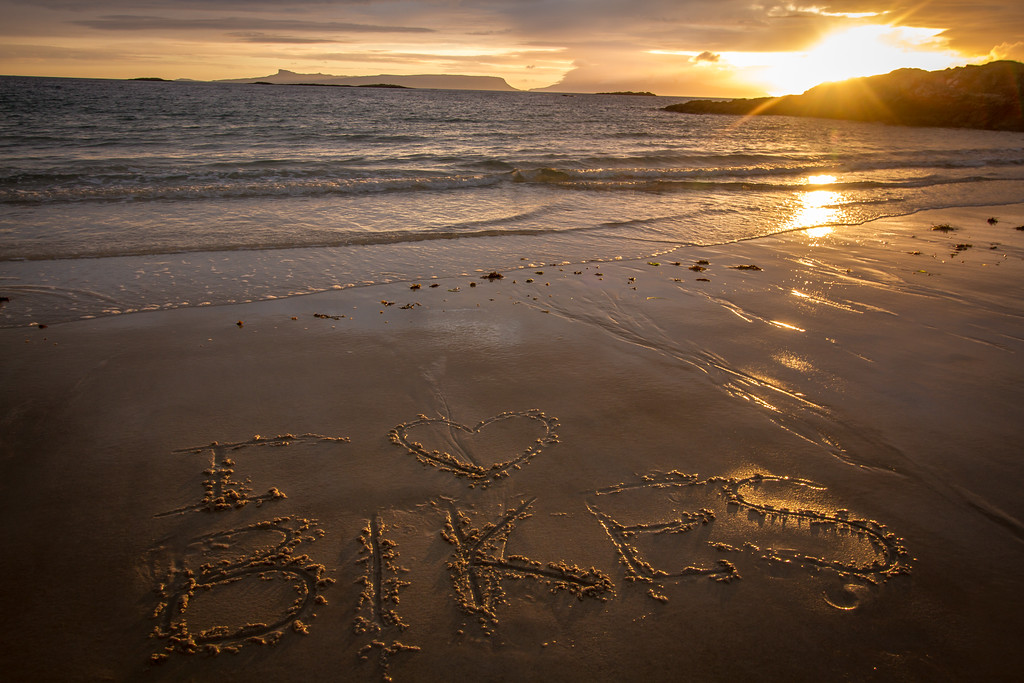 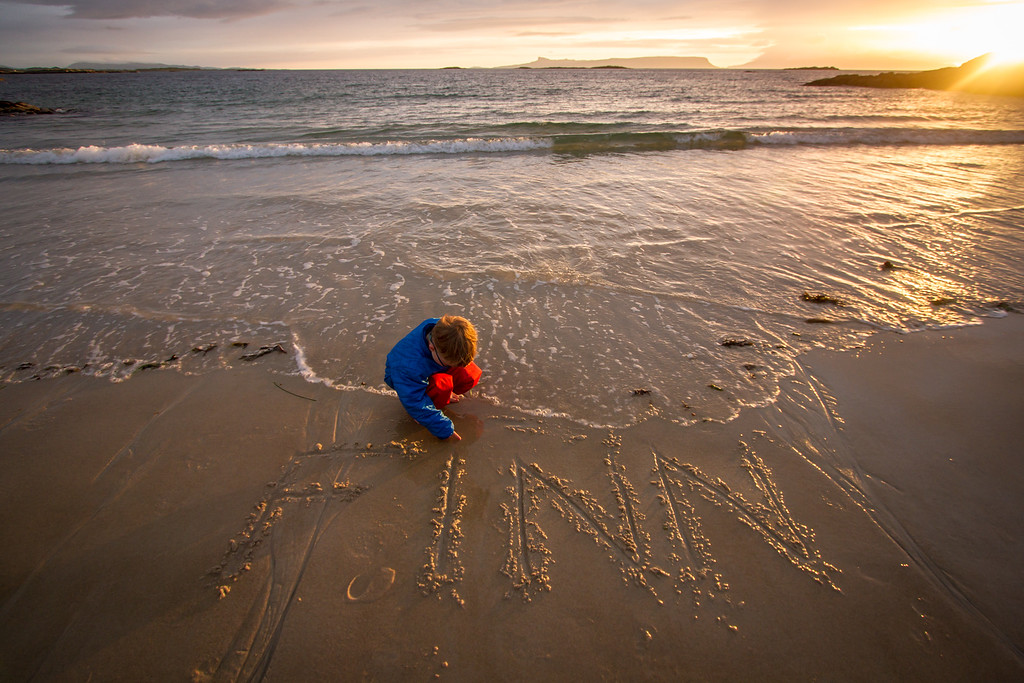 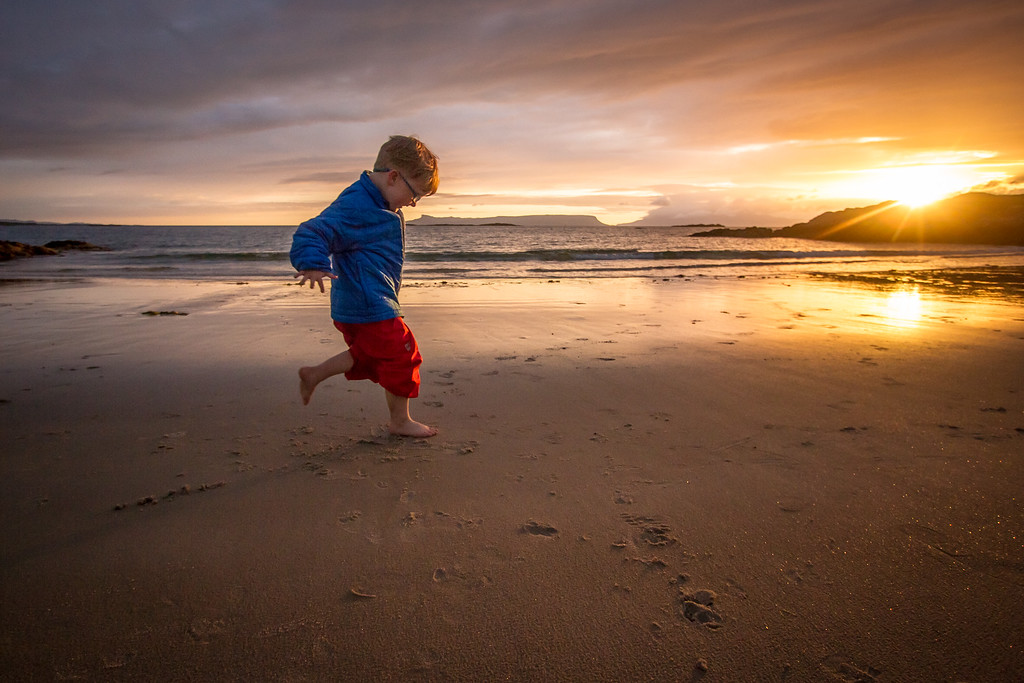