After a successful overnighter to kick things off on Thursday, and then a great silent auction and social at the Canmore Brewing Company on Friday night, it was officially summit time.

Last year’s summit was spent shivering in a tent in the Rebound Cycle parking lot. This year we went up-market and luxuriated in the warm and spacious confines of the Canmore Opera House, courtesy of Spring Creek.  It’s a recently finished rebuild to match the original Canmore Opera House, which used to exist in that location – the actual original lives in Calgary now.

First up was a frosty morning ride, and then it was yoga time.

Despite the innocent smile, Jeff Mah is an evil man who knows all of the tight spots that every cyclist is liable to develop. As a result, an hour of glorious torture and fits of giggling ensued.

A talk from Ryan Draper (from Rebound Cycle and Cycling 101) was up next, convincing some of us to start thinking differently about nutrition (what do you mean living on M&Ms for a week straight isn’t a good idea?!).

The mysterious green mix drink he shared tasted so strongly of green that we were convinced it had to be healthy.

Favourite moments from that talk:
Ryan D: Who here is vegan?
Audience member: I dabble.

[an audience member explains their keto diet] “… and the rest is protein.”
“Did you say poutine!?”

I still haven’t gotten around to trying any of the cricket-based (the insect, not the sport) snacks he uses, but I’m intrigued…. maybe if they were covered in chocolate. Or if they were filled with chocolate. Then they’d essentially be an M&M.

Chatting to Nick from WildSmart was next – practising with bear spray was fun, but really we learned that bikepack racing is fundamentally incompatible with bear-safe practices. How can you hang anything that smells of interest to a bear, when you yourself haven’t washed in over a week, and your clothes are permeated with all manner of food. The only viable solution is to haul yourself and bike all up onto a bear hang. Either that, or utilise the ever-excellent back-country Hilton (aka a lockable pit toilet).

As bikepackers, probably the best thing we can do is make sure we’re making a lot of noise when we’re on the move, and avoiding surprising a bear. And no, “marking your territory” to deter wildlife doesn’t work. 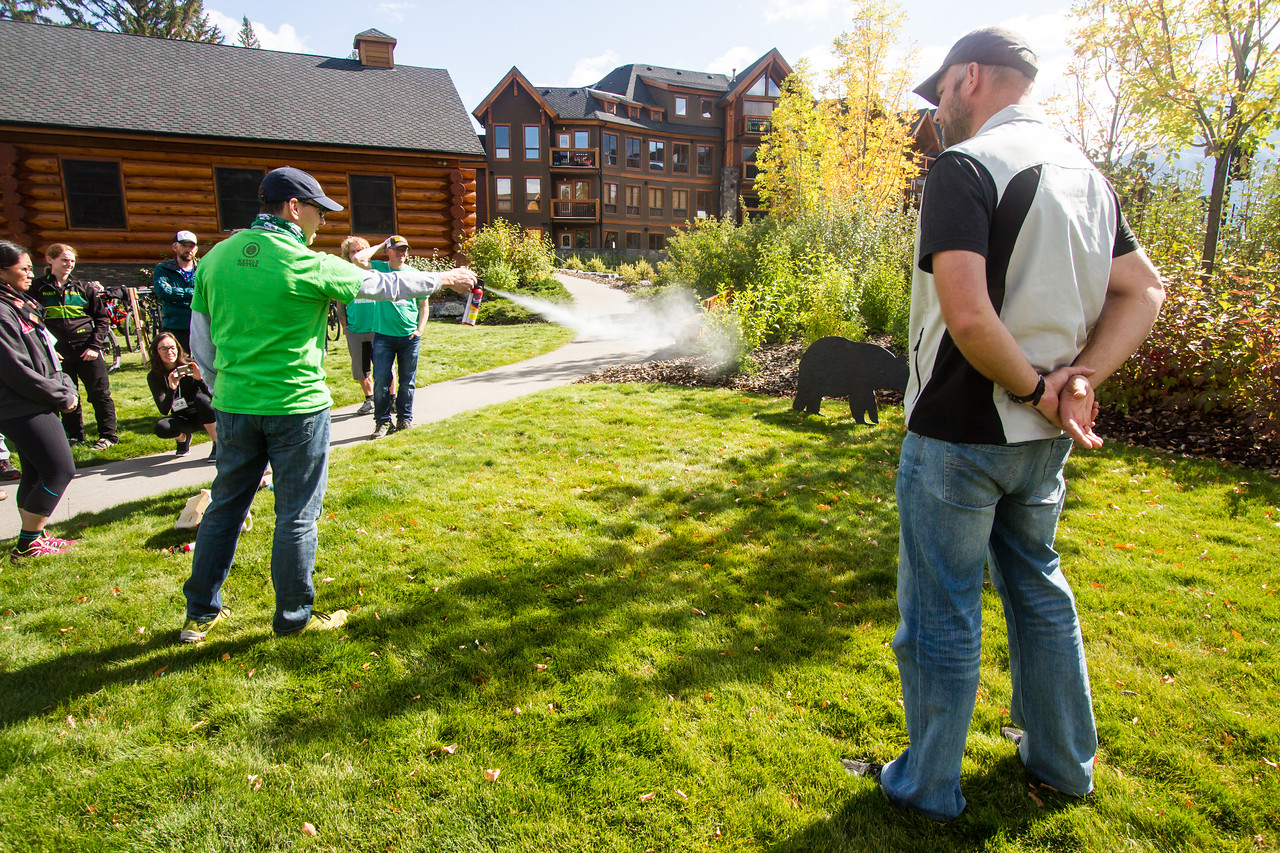 I was in the Women Leading the Charge panel, and that disappeared in a blur. I’m sure I must have said some things, hopefully some of them were entertaining, or thoughtful, or helpful in some way shape or form! It was a fun group of ladies to share the stage with though, that’s for sure.

Saturday evening finished up with a captivating talk from Mike Dion on the ‘Ride the Divide’ movie origin story – and really, a lot about the origin of the Tour Divide itself too. If it wasn’t for Mike and Matt and that movie, there’s a lot of us that wouldn’t have been inspired to take up bikepacking, so it was a fascinating look into the origins of our shared obsession as much as anything.

First up after the ride on Sunday morning, Barry from Specialized came in for a chat, and to make us drool over the Specialized Sequoia he had hanging tantalisingly on display.

Val and Josh shared stories of tandem-life (short story, they got the tandem because they wanted to be able to take pie with them bikepacking) and racing the Idaho Smoke n Fire (Josh: “for that whole race we didn’t argue one bit.” Val: “Well we did.”)

And Cory Wallace revealed that his secret to success is that he’s actually getting out bikepacking in the off-season! Well at least, that’s how I’m choosing to interpret his talk – it was really interesting to hear of someone you only know as a lycra-clad racer being just as into bike exploration and random fun times as the next one of us.

While waiting for the tech details of an interview with Jay Petervary to sort themselves out, an impromptu Ryan and Josh interview kicked off on-stage.

And then, amazingly, technology cooperated, and a skype interview with JayP followed. You know what’s fun for interviewees? Being put on the spot and asked to come up with their top 5 tips for new bikepackers. JayP did well, and came up with this list off the top of his head:

Proabably not bad advice for life in general.

And that was it! Time for some wrap-up chat, brainstorming, dreams of the future, and the swag give-away.  Thanks to Ryan and Sarah for making it all happen, and the rest of the bikepacking community, for generally being awesome – and also helping make it all happen!