A post that was split into two not because I have so much story to tell, but because there are so many photos it was getting a little overwhelming.

Before everyone started heading off on their separate ways, we got some photos. Chris and Jeremy and their daughters had arrived at dusk last night, having made it through on the Big Elbow side of the loop. The kids were absolute troopers, and were all set to head back via the Little Elbow side today. 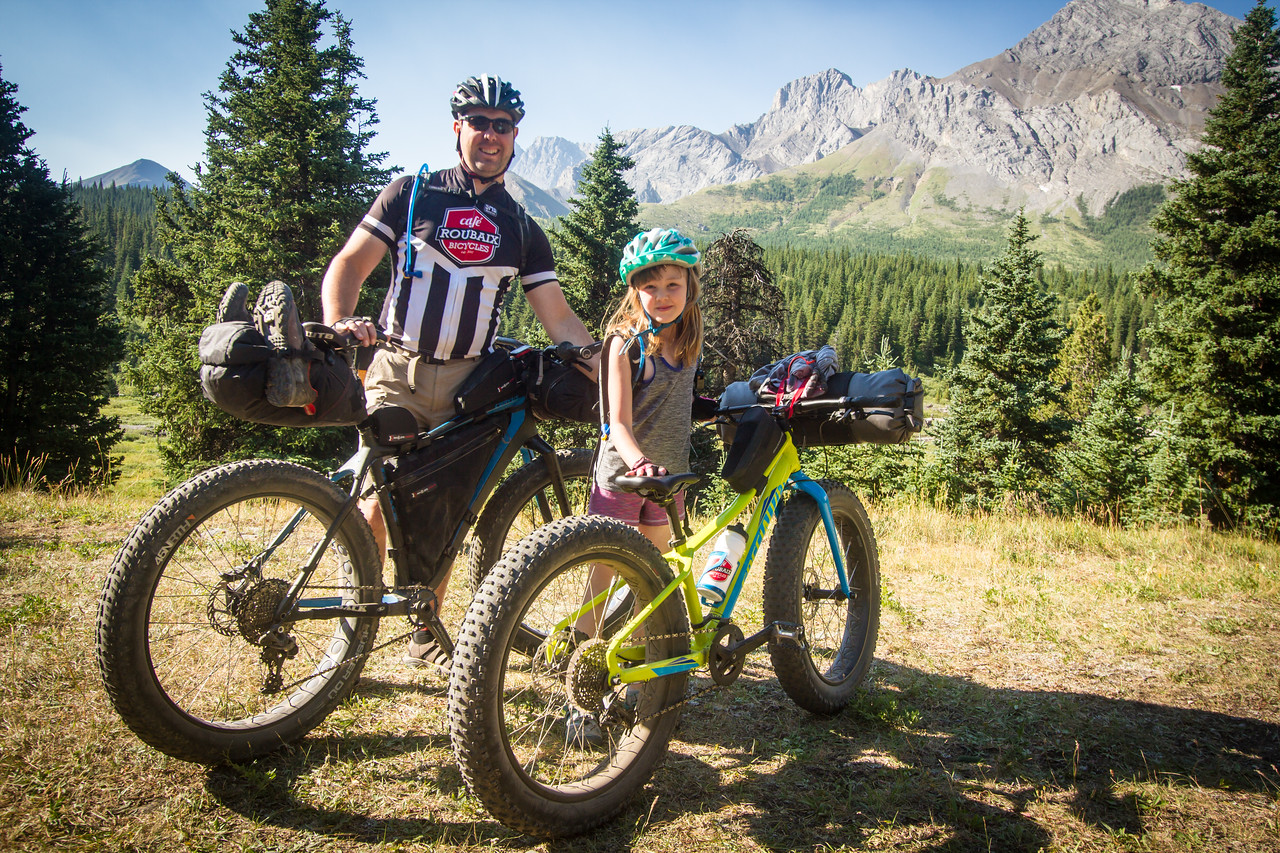 The one hiking family set off back via Elbow Lake, and the rest of us set off on Big Elbow – which hadn’t exactly been the plan originally, but who wants to do an out and back if you have the option to do a loop? And we knew it should be technically possible to get the Chariot through, and seeing as Team Jeremy and Chris had done it… well. 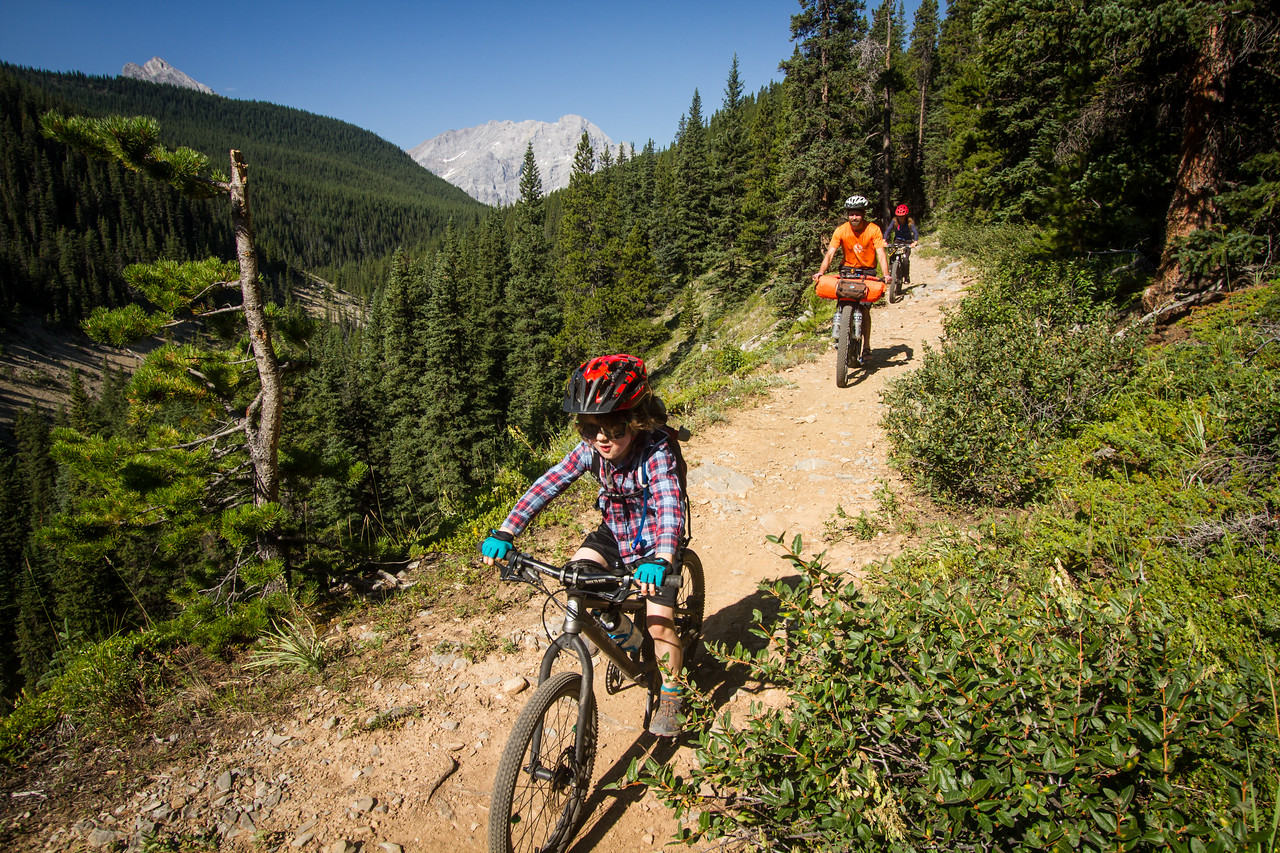 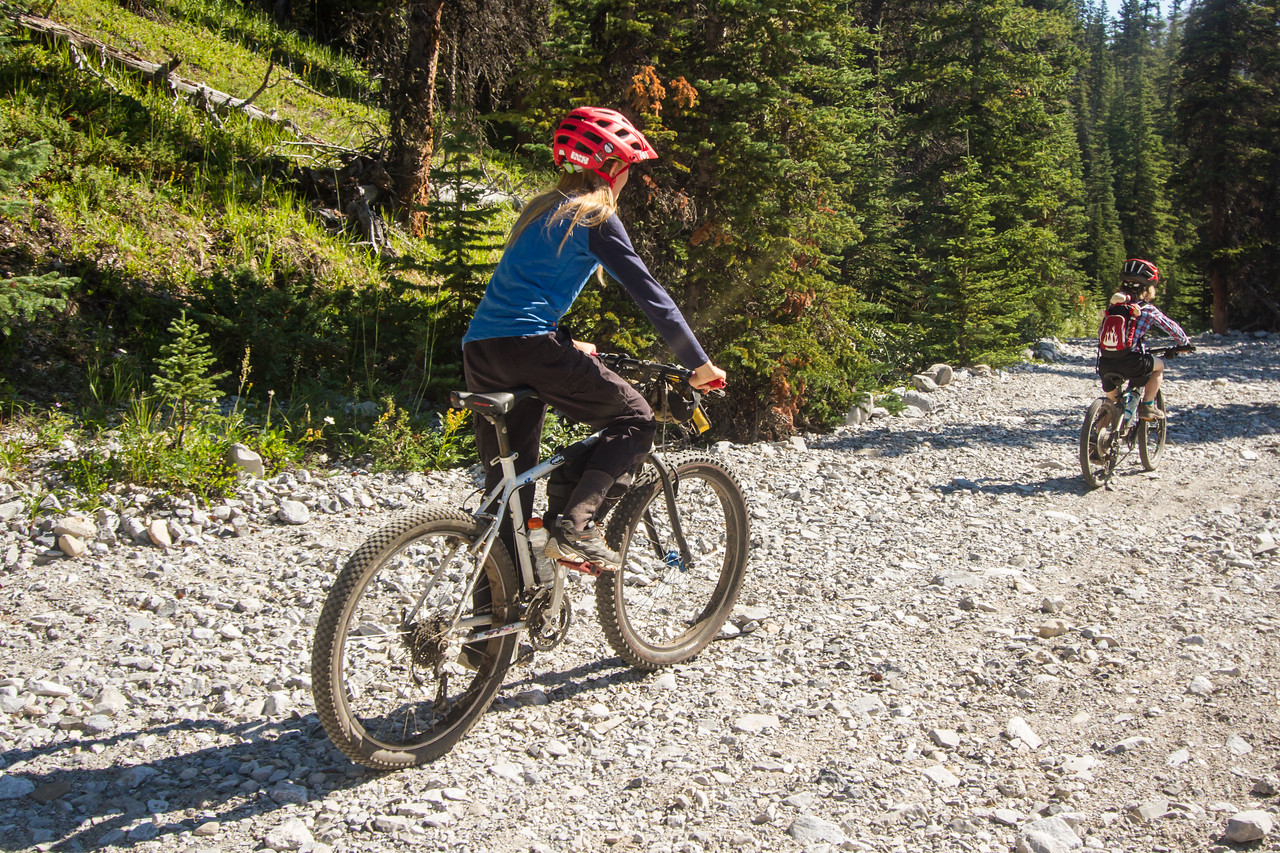 We made it though! With our vast array of bikes, skinny tyres, fat tyres, towing luggage and kids.

The reroutes built after the flood involve a few steep up and downs, on loose trail. Good hike-a-bike practice!

It’s definitely still beautiful out there though, and one of the advantages of climbing up out of the river valley occasionally are the views you get as a result.

Mike was a bit dubious about this being a Chariot-friendly trail. In my defense I never claimed it to be Chariot-“friendly”, just Chariot-doable, which is a completely different matter.Â  And at least Zion wasn’t in it when it flipped!

It was warming up as the day moved on. Blue skies, lovely sun, hot summer bikepacking, Canadian Rockies style. And the boy was learning the art of standing on the pedals and cranking up steep climbs. 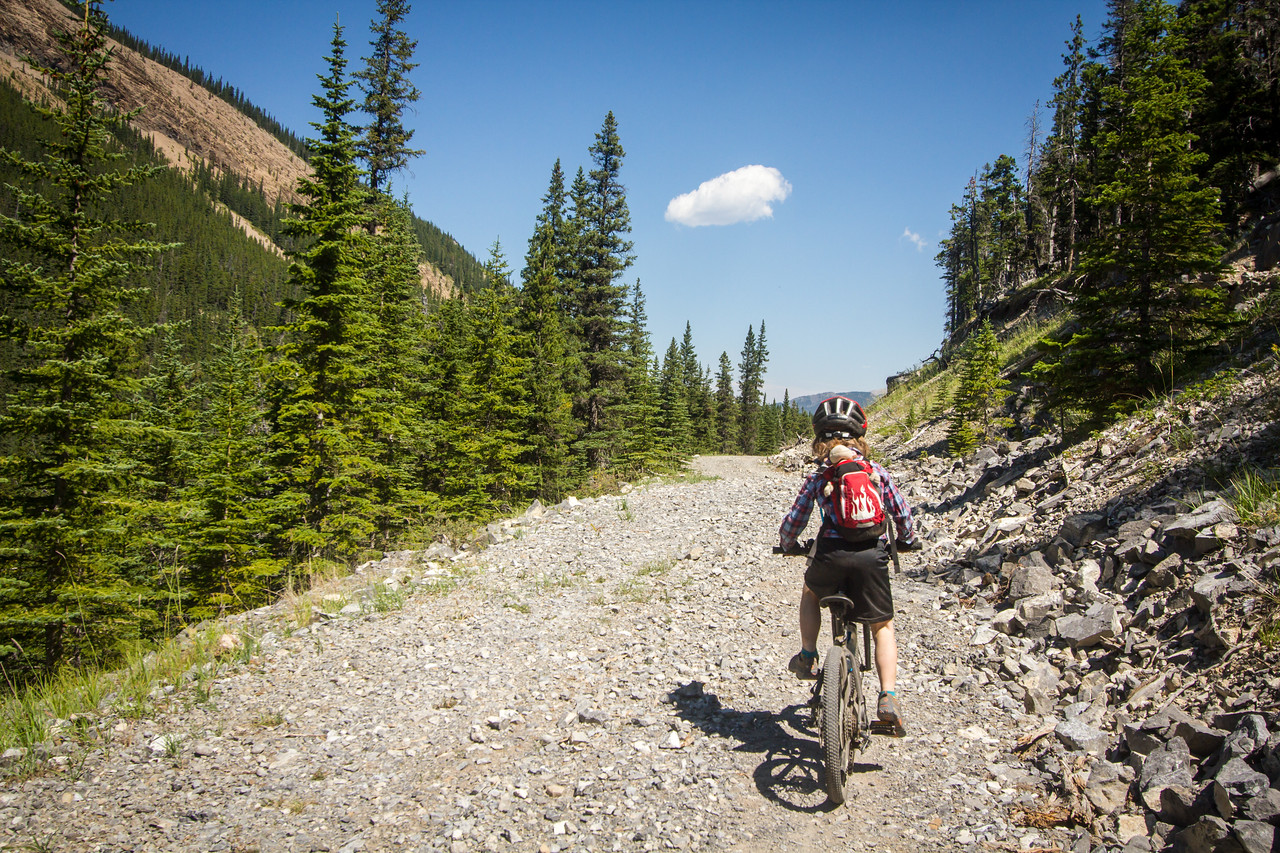 The river made for a nice cool break by the time we reached it. 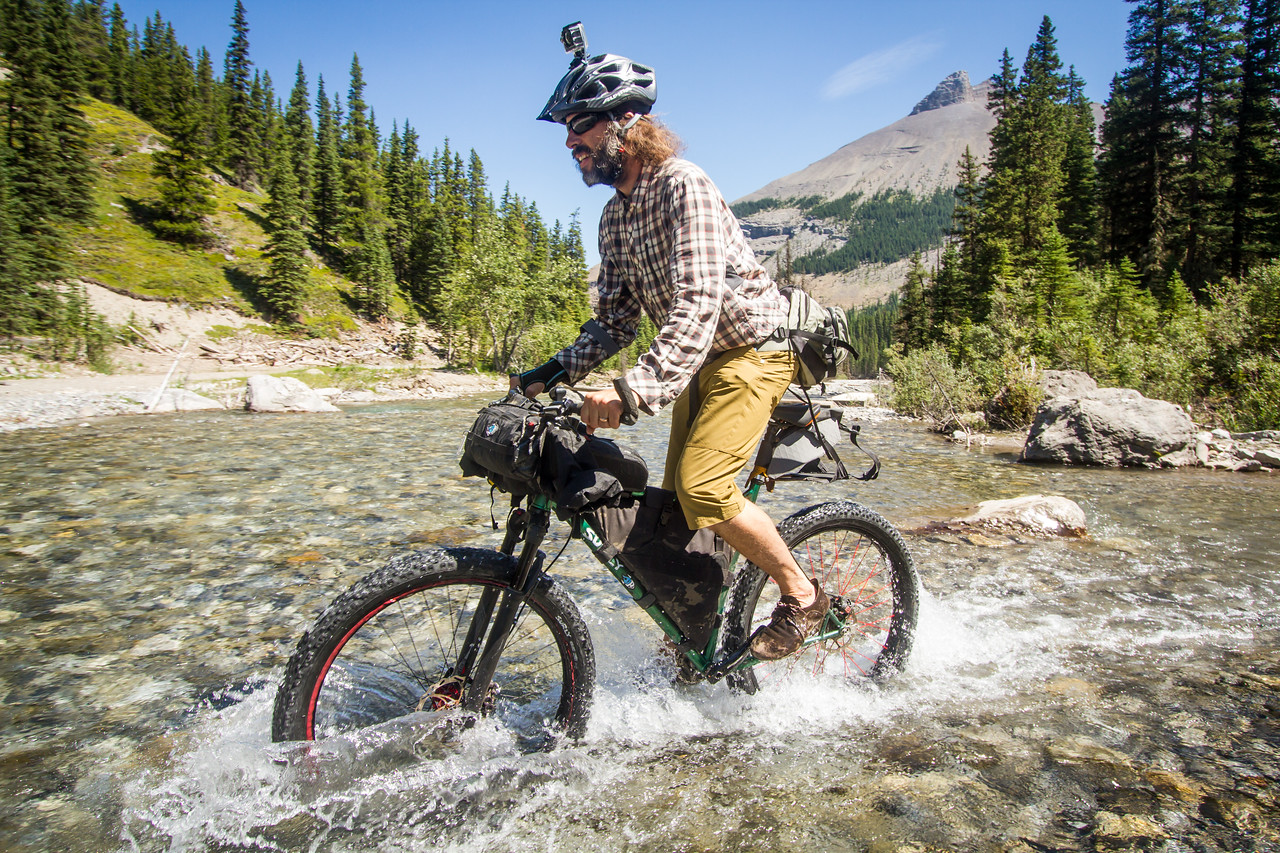 Kat and Zion had actually made it over to the far side of the river, but decided to go back and have another go at it, just for fun.Â  And they made it! I was convinced to try and ride across – it didn’t end so well, my legs just didn’t have enough go in them for the final push, and I scored myself a bruise on my knee that lasted a few weeks. 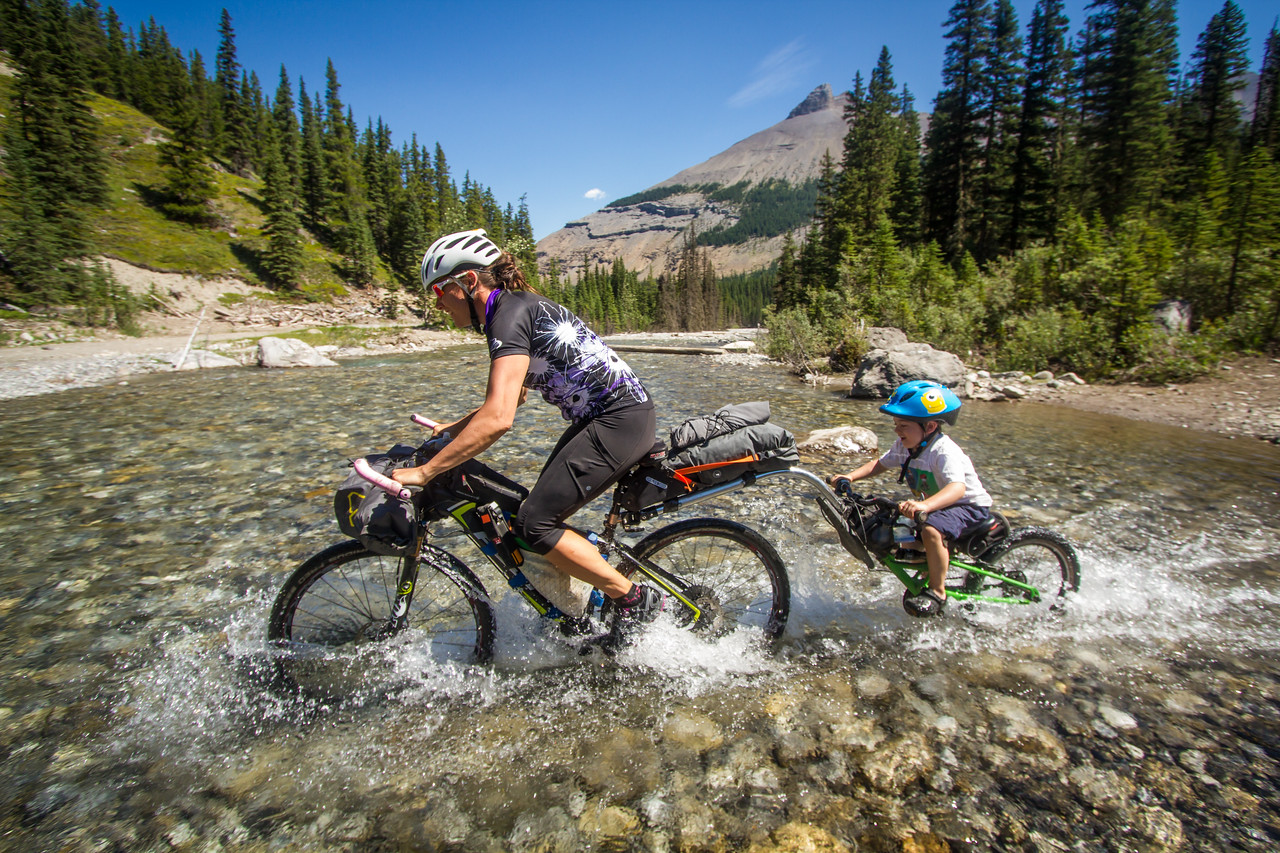 But a river is a good excuse to stop and snack and throw rocks, even when you don’t have to bandage up a Megan with bleeding legs.

And then onwards – the final push started to feel a bit bakingly hot and dusty, and cheering on the boy proved more challenging. His legs and spirits were beginning to fade. 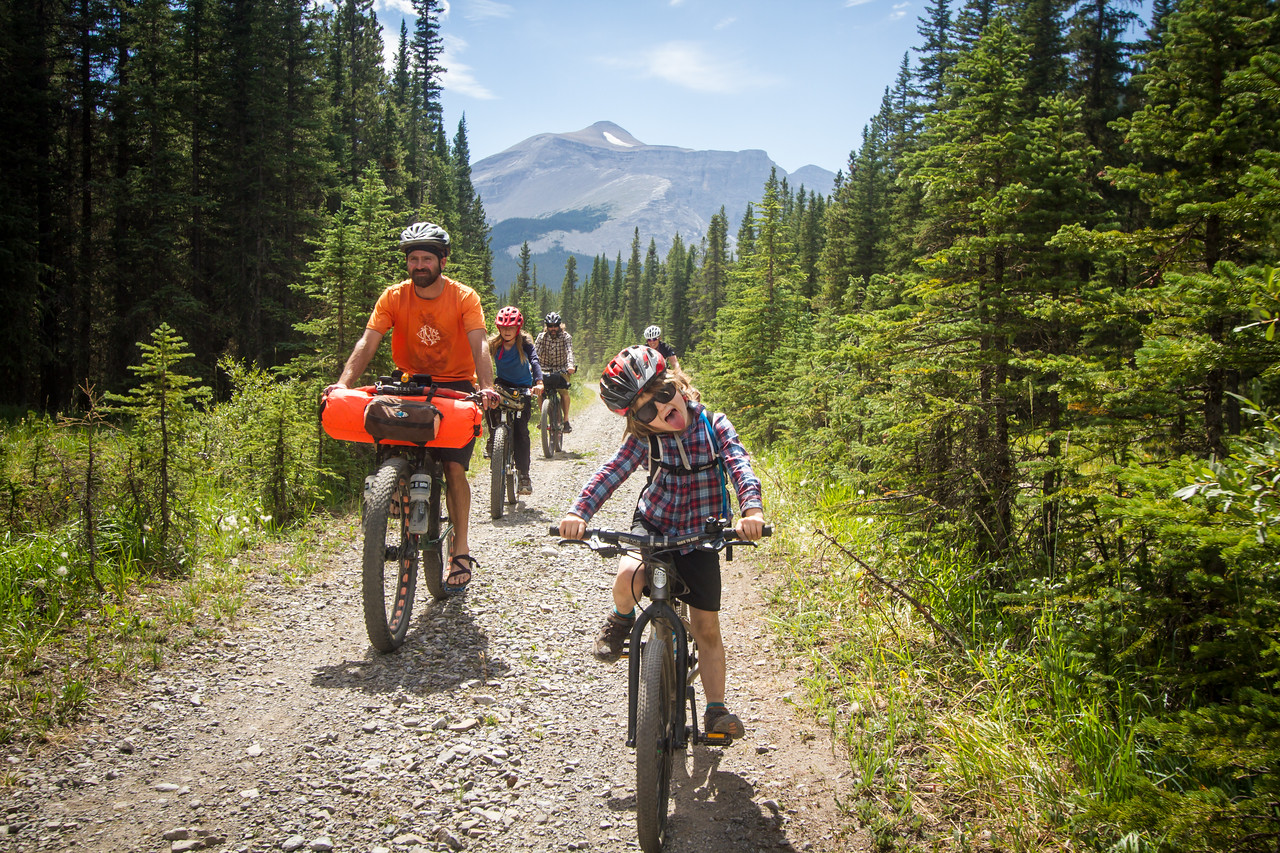 But then – the suspension bridge that’s essentially the finish line. We made it! 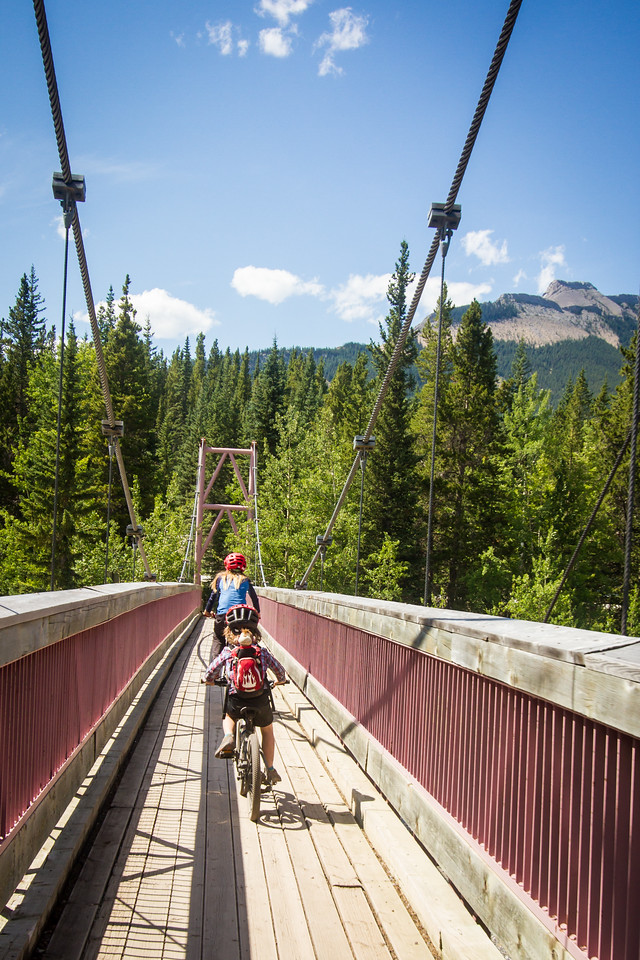 (Oh, and don’t pay any attention to the elapsed time in the Strava thing below, I’m pretty sure it’s counting moving time only, which is only vaguely accurate for this sort of thing … from memory it took about 5 hours to ride out?)

Doug’s write up of the trip is hereÂ – his son Tadhg is Finn’s new hero after a couple of bikepacking trips together this summer. Thanks to everyone who came, I’m pretty sure it was fun, but I was so fatigued it was hard to properly enjoy it!