We paddled a canoe! Me, infamously not a fan of going into water, was convinced to go canoe camping. The boy had never been in a canoe before, and it was the first anniversary of our Canadian citizenship ceremony, so it seemed like a good idea to say yes when we were invited along on the trip.

We were invited along by another couple who’d booked out the whole Hidden Cove camping area – which is really just four tent pads on an island that really isn’t that much of an island, but you can technically paddle around it as long as you’re really careful, and maybe don’t mind hopping out and pushing a little.

We’d been an an overnight kayaking trip before in the Yukon. We’d been in a canoe before. We’d been on a lot of whitewater kayak daytrips, and rafting daytrips. But never an overnight canoe trip. Thanks to borrowed gear, we largely managed to get ourselves kitted out.

And so we lashed everything onto the canoe somewhere or another, and set off across Maligne Lake, following Sean and Jessie with their two kids. Thankfully, the boy thought it was great, particularly when we had any bow waves to cross and the canoe started bouncing up and down. Thankfully I found this all to be wildly tame in comparison to that one time Alex took me out in a double kayak off the coast of Australia at Wilson’s Prom, straight out into the Bass Strait towards Tasmania, in enormous waves that were trying to kill us. On that occasion the swell was big enough that we were constantly losing sight of the other kayaks once we’d paddled away from the shore, and although we managed to paddle out through the breakers on our first attempt, it wasn’t without having my deck collapsed in by crashing waves, and having the bilge pump running continuously as the kayak filled up with water. Anyway, compared to that, this tiny little flat lake seemed fairly innocuous, even with the occasional waves and a bit of wind.

My paddling isn’t great, but we managed to not get left too far behind, and basically headed straight towards the island – it’s only about a 3km paddle to get there.

Pulling up on the dock, we were blown away by the wind – it’s a windy little island! We got a fire roaring in the shelter (which we were very thankful for) and set up tents in the two furthest (and most sheltered) camp sites.

After dinner, Alex headed out fishing. And caught a fish!Â After careful study of the fish brochure, we determined that it was a brook trout and we were allowed to eat it.

Seeing as we’d already eaten dinner, Alex prepped it so we could eat breakfast fish the next morning.

We cooked the fishÂ in the stove in the shelter the next morning. (Relatively) fresh breakfast fish is delicious and I would eat it every day. I’ve never had such a tasty fish in my life.

The next day we went for a lunchtime paddle to the next picnic ground further south down the lake. A really short paddle, but something different – and a new fishing spot for Alex, who by this point in time had become addicted. Fishing is just gambling for food, and he had won big right off the bat.

One great thing about canoe trips is that you can justify lugging along luxury items … like silly inflatable sofa devices that are perfect for napping on (if you can just convince the offspring to stop jumping on you for a few minutes).

Back at our home dock, Alex kept fishing. In the rain.

We went wandering around the island with the kids. 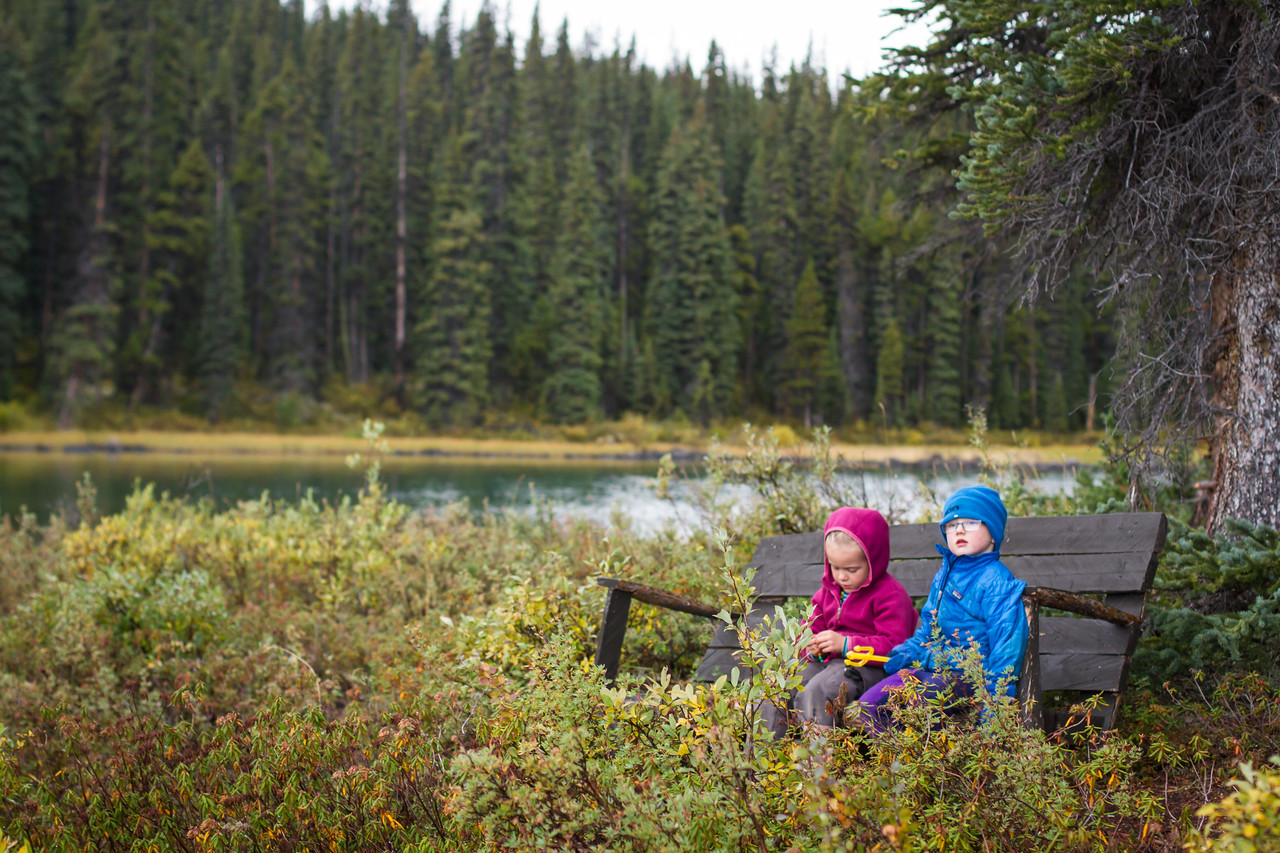 And digging in the mud and the rocks unearthed some cool bugs. 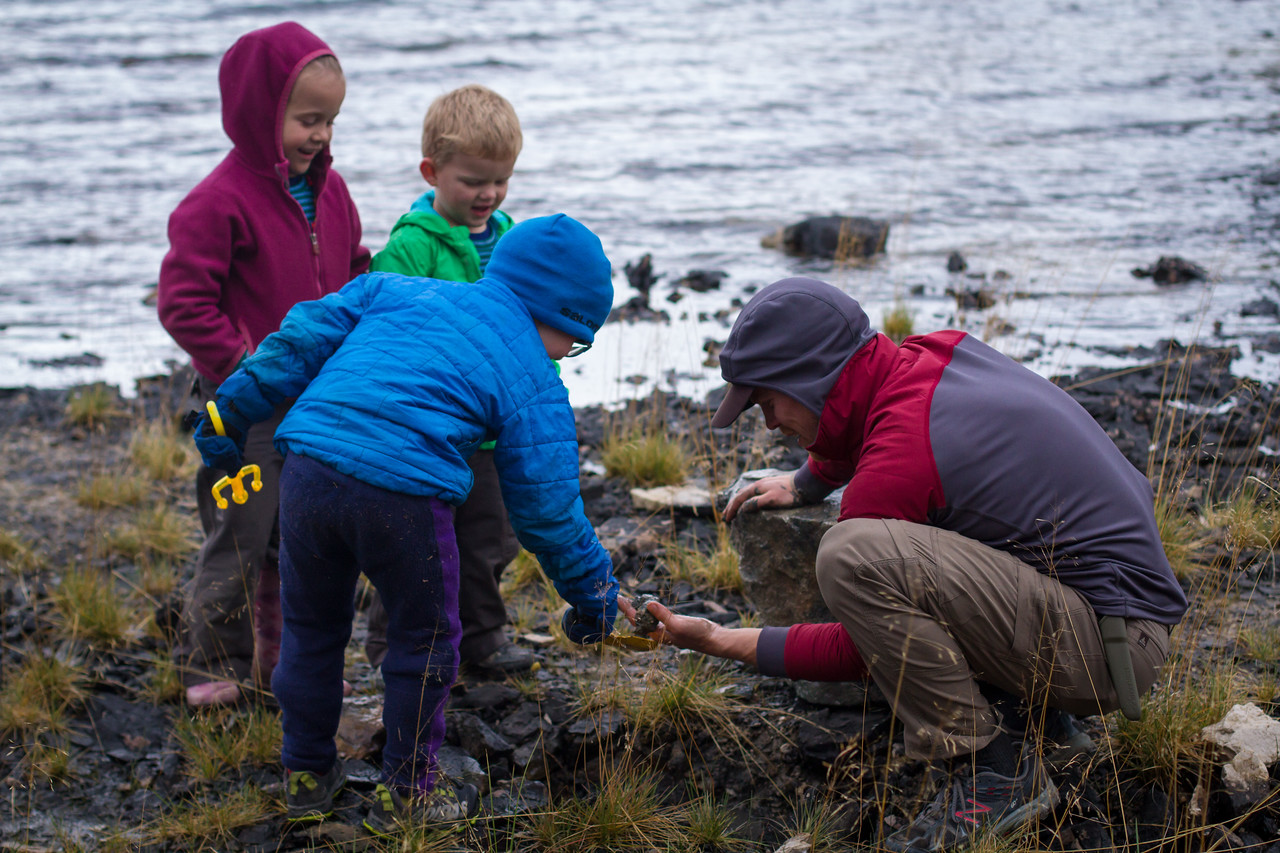 That evening we all (with the addition of a few more adult-sized people to our group) sat playing Catchphrase, Cards Against Humanity, Chase the Ace, and engaging in low level pyromania. 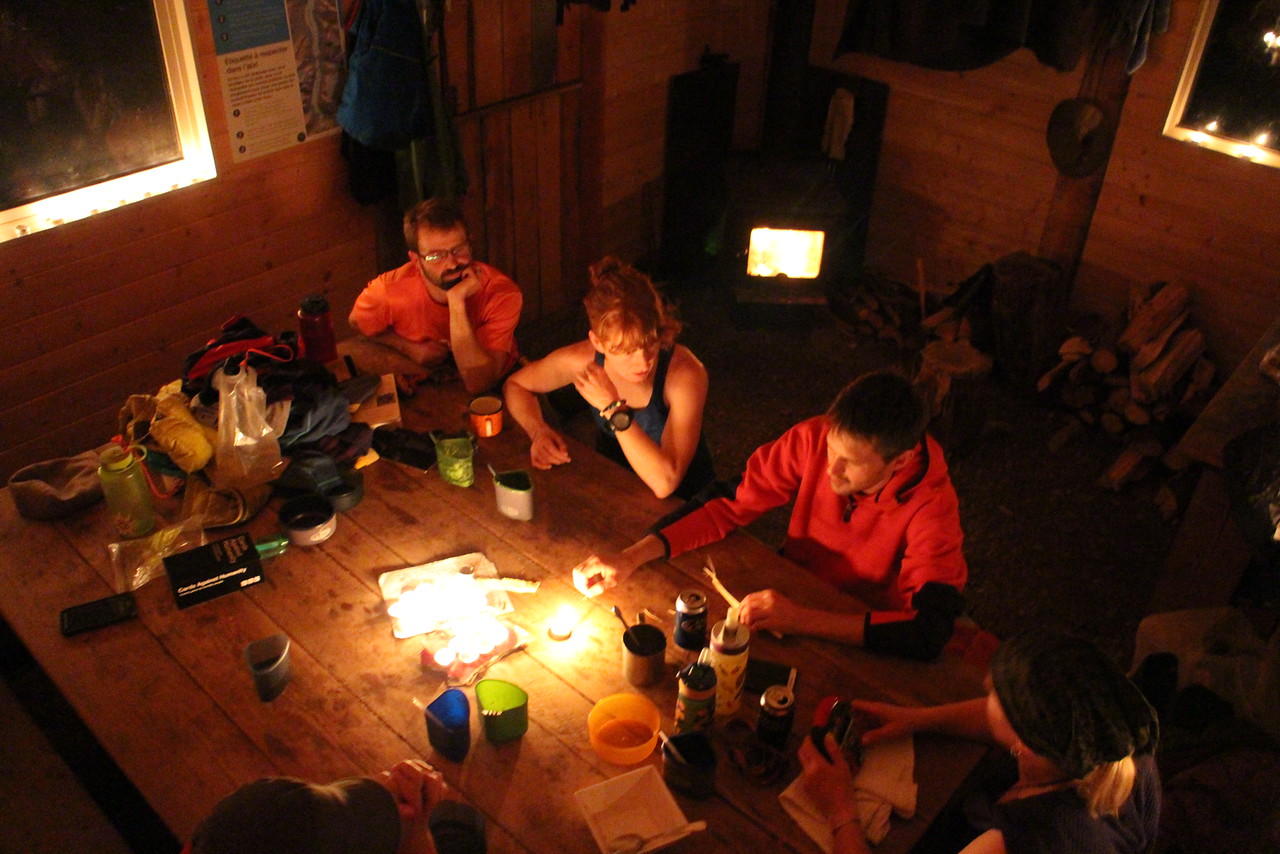 The next morning the boy tried some fishing. He’d been overjoyed at the capture of the first fish, but then wasn’t interested in eating it. But was still keen on the idea of trying to catch some more.

And then it started to snow – three of our group set off into the snow and wind, hoping for the best.

The two families stayed behind, waiting out the snow and hoping the weather would break. The warming hut on the island is fantastic (even if the table seems larger than it really needs to be).

And then, finally, there was a patch of blue sky, the wind died down, and we went for it, paddling northward slowly, and stopping in along the shore, fishing a little, exploring a little, and snacking a little.

Alex’s last ditch efforts to catch another fish failed. So weÂ obviously caught and ate the only fish in the lake.

All in all, an awesome trip, and now we’re forming cunning plans to do some more canoe trips next summer.

And maybe even return to Hidden Cove for some winter camping. It’s a long drive up to Jasper, but it would be a perfect snow camping spot with kids.