Our very first sans-kid overnight trip was a success. Well, a success in that we had fun and he had fun. Less successful in that when we went to pick him up on Saturday afternoon he was annoyed with us for turning up and taking him away from his friend’s house where he’d been having so much fun. So annoyed he refused to so much as hug me for the rest of the day. On the plus side, he really wants to have more sleepovers now. 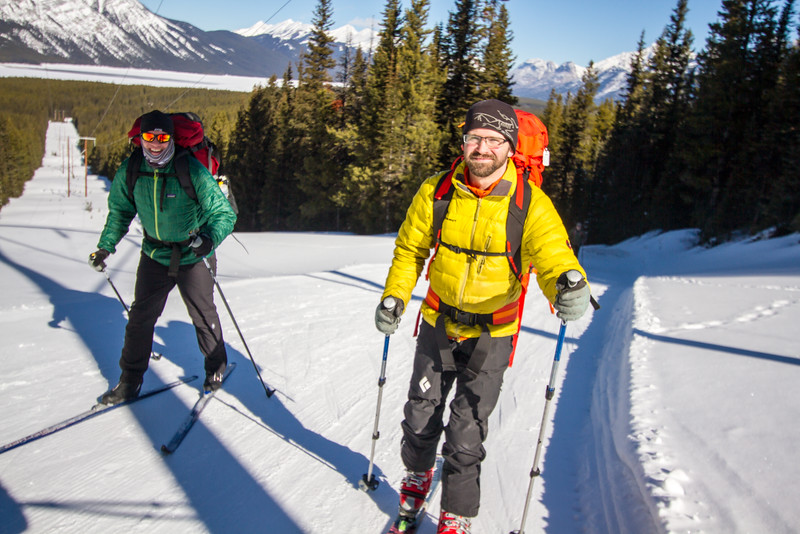 We’d been invited on an adults only trip to Elk Lakes Cabin, with everyone leaving their kids behind at home.

Everyone else was on heavy cross-country skis – and although our telemark gear and skins seemed ludicrously heavy, I really wouldn’t have swapped it for anything else. We could happily cruise downhill on any surface, and climbing with skins was simple and straightforward, and far less hassle than waxing or struggling with grip on waxless skis that weren’t meant for the weight of a person plus a backpack.

After arriving at the hut in a completely leisurely fashion, a few of us wandered out to the Lake.

We found a unicorn there. And confirmed that it was indeed a lake, sat in a hole, jumped in the air, the usual.

Back at the hut, someone had laid out a trap for the more obsessive members of the party – a partially completed jigsaw puzzle. And with all of the easy parts done – all that remained were a pile of snowy pieces with trees or sky in the background. And no box to try and work out what we were supposed to be making.

More than once I’d meant to walk past the table on my way somewhere else, and ended u trapped, trying to fit in just one more puzzle piece.

A pleasantly warm evening spent around an outdoor campfire was wonderful, as we spotted satellites, debated constellations (I’m still not properly familiar with the northern hemisphere night sky) and didn’t have to worry about getting kids to bed.

After a great night’s sleep (no coughing or squirming kid!) we got up and made french toast, our contribution to the shared meals for the group.

Then it was time for a warm and leisurely ski back out again: uphill to Elk Pass, then snacks in the sun by the picnic table, and the delightful descent (mostly) to the car.

On the drive back home we even saw a young boy moose standing in the forest. But then onwards, to pick up our irritated five year old.