To leave Morvich, we were faced with the options of a busy (flat) road, or an old military road (over an enormous hill).

We chose the hill :) 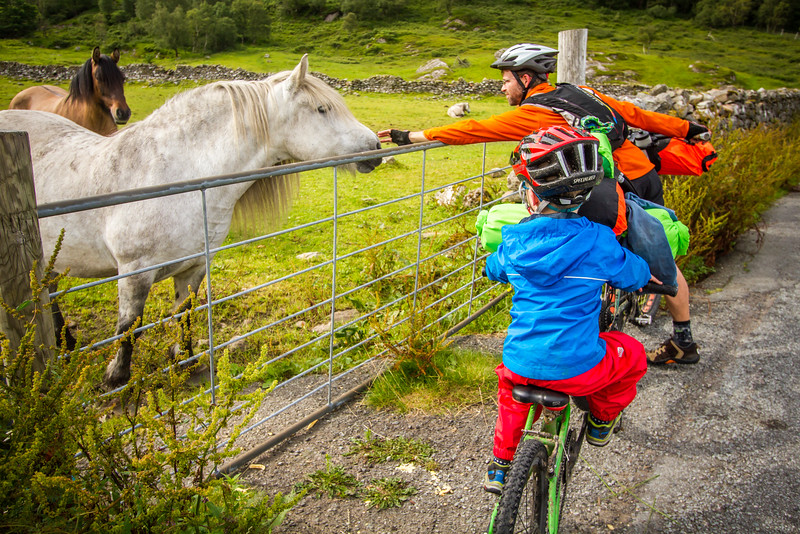 Cycling around the bay, we were surprised to find our old military road was paved. It was quite narrow though, and wasn’t exactly a direct route, so the traffic was minimal and travelling slowly.

It was thoroughly steep, with 15% pitches that had Alex off and pushing. Or just kicking off his stoker, on the grounds he wasn’t pulling his weight. 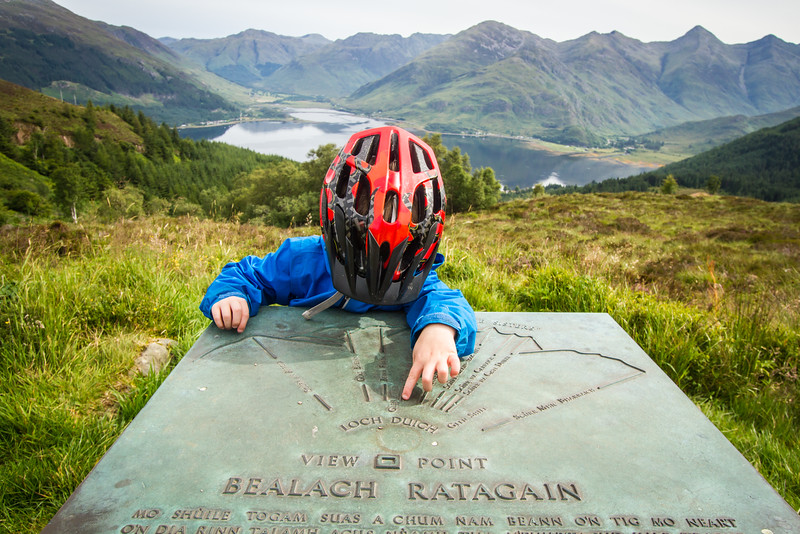 Towards the top of the hill we stopped to admire views of Loch Duich as a poor truck that was stuck just a few hundred metres from the pass desperately tried to get started going up the hill again. Then there was just a glorious coast down to Glenelg Bay.

We diverted into Glenelg for a tasty eclectic cafe lunch and cakes. Then a quick re-stock in the tiny supermarket (two for one shortbread? Don’t mind if I do!) before short cutting past some old ruined barracks, and back on the road to the ferry. 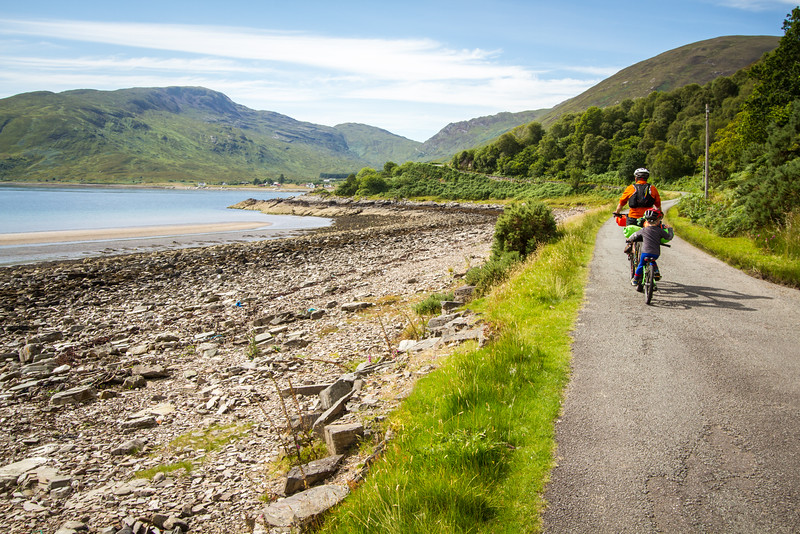 The small Kylerhea ferry was on the other side when we arrived. For Â£8 we got a ride over to the Isle of Skye, across the narrow strait. A ferry has been operating there for centuries; it used to be the main connection between Skye and the mainland.

As we pulled away from the ferry, I looked ahead and realised we had another enormous hill to climb. I reminded myself that I like hills, yet was secretly relieved to discover that this one wasn’t quite so long or so steep as the last at least.

At the top of the pass we stopped to lunch, laze in the sun, and collect some extra water from the stream – it was a warm day! We even found a flat snake to show Finn (for educational purposes). 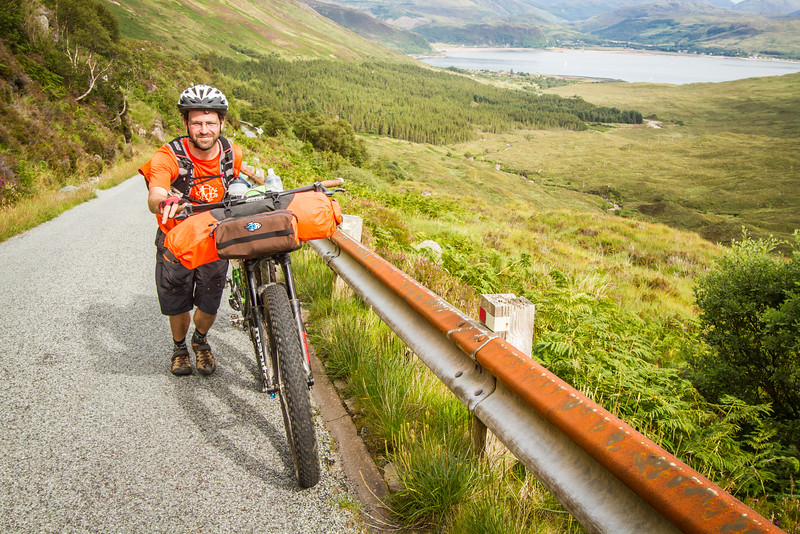 Another glorious coast down toward Broadford Bay followed, Skye is beautiful.

Also, I have realised my son is a hand talker. A good chunk of this trip was spent reminding him to keep his hands on the handlebars, as he kept gesticulating wildly with them at inopportune moments. See prime example in photo below: 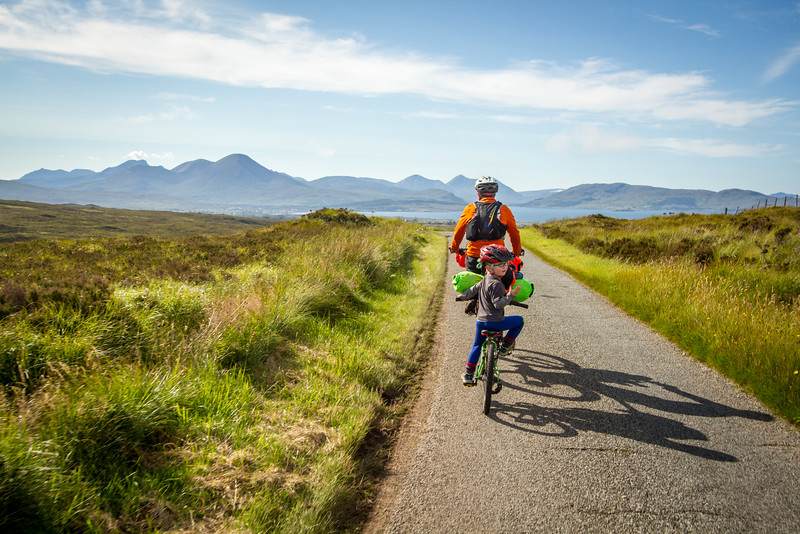 On the bay, we reached an interesting looking wild and rambling campground. The sign outside read: ‘TOTALLY FULL!’

We wondered if they really meant it; sometimes they’ll have extra space for hikers or bikers… but inside there was another sign reading: ‘WHEN WE SAY WE ARE FULL WE MEAN WE ARE FULL’.

Well, that was nice and welcoming. Slightly alarmed, we started backing off and planned to head onwards. But the campsite man wandered up, and pointed out the smaller, harder to read sign that reads: ‘EXCEPT FOR WALKERS & CYCLISTS’

It was clear and warm with lots of blue sky. There was only a mild breeze, so the midges were out in force. The campground sells the midge repellant ‘Smidge’, with a little sign suggesting that it “works quite well”. Understated Scottish advertising at its best. 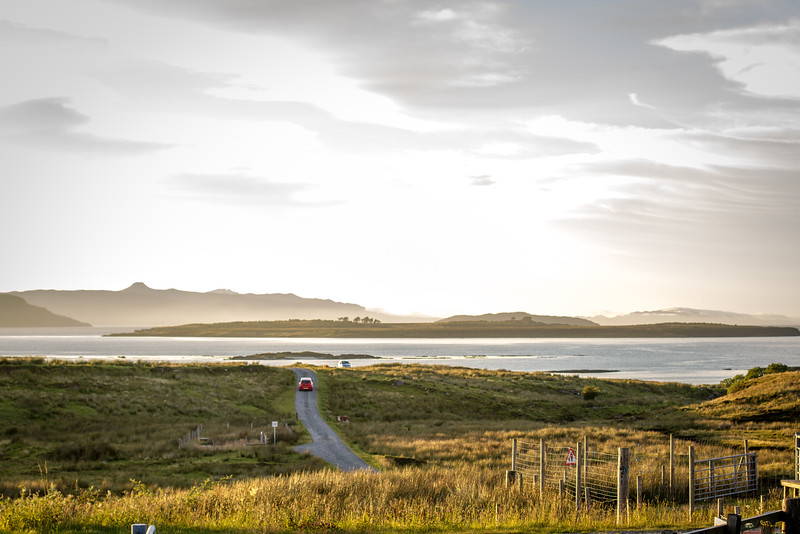 Notable quotes of the day:
“It’s too hot in Scotland”
“Do we have my swimming things Mama?”