Towards the end of March I started to realise I wouldn’t be able to ride the Tour Divide this year. I still wasn’t sure what was wrong with me, but it didn’t seem to be clearing up any time soon. By mid-April I was certain. And so through April, Alex started thinking about it. Going out on longer rides, testing his setup, building some fitness. In early May he started ordering some big ticket items with the Tour Divide in mind – new dyno hub, new wheel build, and then getting his drive train replaced.

So when Grand Depart rolled around, it was Alex lining up to head to Mexico. He rode into Banff the night before – just so he could say he’d rolled out of the front door of his house and ridden all the way to Mexico.

The morning of the Grand Depart was cool, but at least it wasn’t snowing! The day was set to be full of rain and mud though – pretty much a traditional first day of the Tour Divide.

I tracked down Neil and waved him off too – one of the fine Banff folks who I’d met at the Bikepack Summit last year, and who had since been silly enough to agree to come out and ride bikes and camp in the snow with me.

The traditional start-line shenanigans unfolded – Crazy Larry organised everyone into a group photo, there was a lot of yelling, people look excited and nervous, made last-minute adjustments, and then they were off.

And then Finn and I piled into a car, and with my friend Kate, headed up to Spray Lakes to catch them about 30km into the ride. We managed to arrive about five minutes before the leaders, and then sat in the overcast forest, cheering people on and taking photos and people trickled through in clumps. It was surprising how much the field was starting to spread out already, sometimes five or six people would be riding near each other, then there’d be no-one for a minute or more.

I snapped photos of nearly everyone, including Greg, one of the other Canmore locals:

We stayed up there for about an hour, and cheered over 100 riders through (including the former governer of New Mexico), but then made our break when a suitable gap in the field appeared. Because we had to pack to drive to Fernie! The boy and I were headed down there to spend the weekend staying with friends and cheering on riders some more. Rather conveniently, a bridge wash-out had let the race course to be detoured through Fernie, right past my friend Katya’s house. Perfect!

Late on Friday night I watched the dots of Josh Kato, Ben Steuerbaut and Brian Lucido leapfrog through town. It was tempting to get out of bed and wander down the hill to perform a 7-Eleven stalking and photography session (because that’s the other benefit of Katya’s house, it’s about 100m from the 7-Eleven, which is the only 24-hour service on-route in Fernie), but instead I stayed tucked up in my warm bed.

The next morning was a different matter though. I looked at the tracker when I woke up and saw Per (South Africa), and Nathan and Pete from New Zealand were there re-fuelling. Also, it was sunny out. What the hell – I threw on a jacket and shoes and wandered down to say hello and ask if I could take photos. It turns out Nathan is an old friend of my friend Kat – the world of crazy people is a fairly small one. 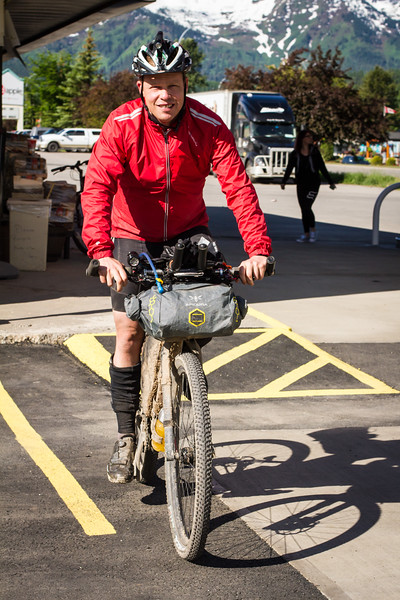 As the day progressed we chalked up the road outside the house, and kept an eye out for riders.

Word spread, and more locals got into the Tour Divide rider-spotting spirit. Up the road from us a family was set up with cowbells.

We wandered to Tim Horton’s for lunch, which looked to be about the time Alex was going to be hitting it too. The night before he and a bunch of six had pushed to the pass atop the Coco Claims reroute, which by all accounts looked to be hike-a-bike straight up a scree-filled waterfall. They had a pretty cold night out (which I guess is what you get when you camp on top of a pass).

We chatted to a few riders rolling through Tim Horton’s, including some who seemed pretty reluctant to leave (always a bad sign).

Ross and Alex had camped together last night – Ross is one of the Aussie crew we’d met in Banff before the Grand Depart, and they ended up settling into a similar pace, riding near each other most of the way to Butte, MT, where Ross unfortunately ended up scratching. 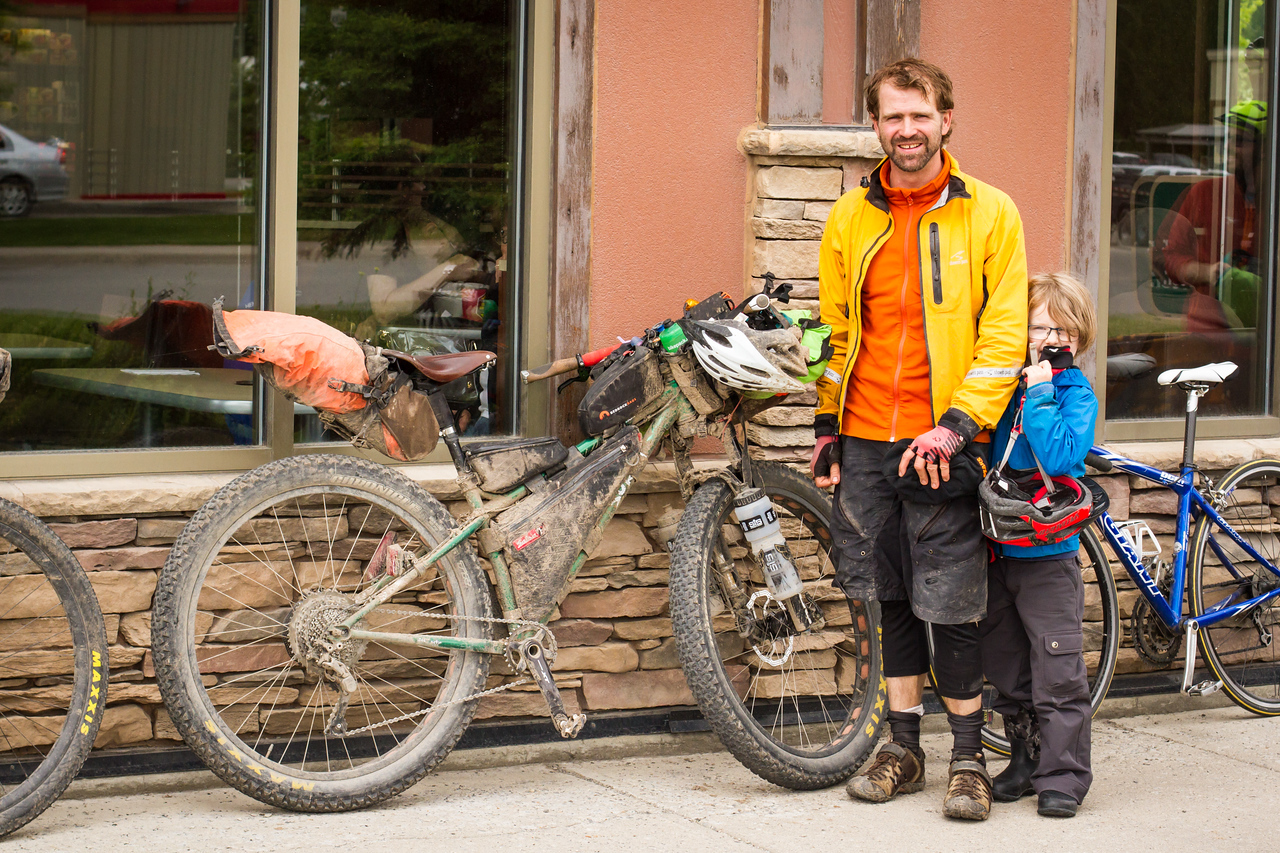 Finn spent most of the next month telling anyone who would listen that his Dad was riding his bike to Mexico. I had some confused parents asking me whether Alex was really riding his bike to Australia – well, it’s definitely far.

Willow might have been the most adorable member of our cheering squad though.

I caught Stefan Maertens rolling through town too – his race was plagued with mechanical issues. He went from being a top contender, to struggling with a broken rear derailleur out of Elkford on Friday (followed by a very long hike to get it fixed) and then later his fork snapped. Sometimes things just don’t work out.

But while all this biking excitement was going on, the kids played. 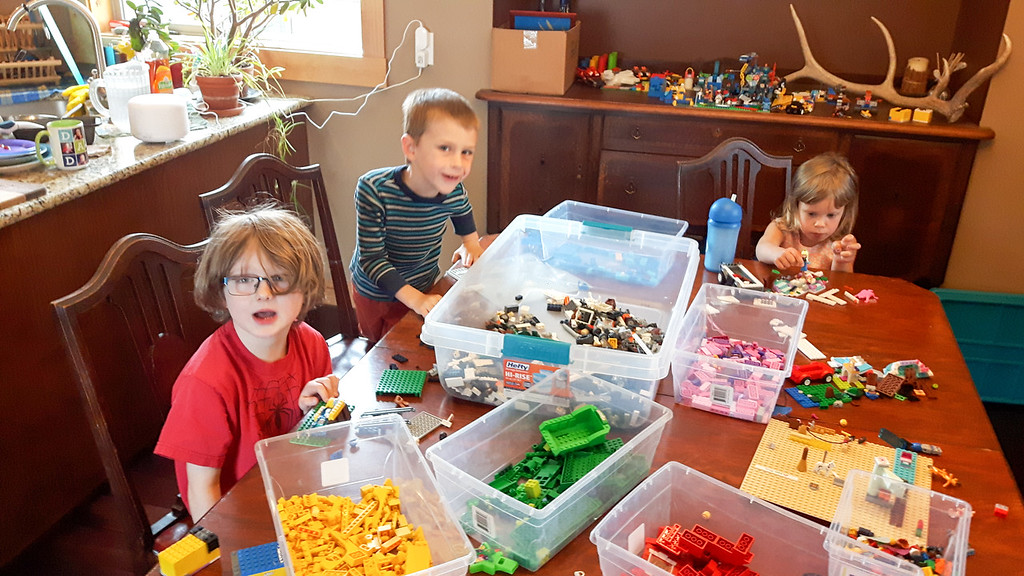 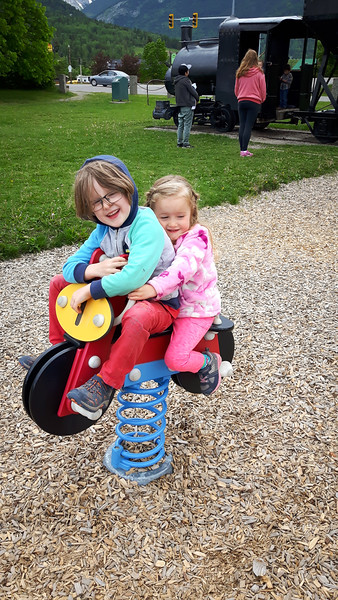 After some indecision I decided to take the border loop to get home from Fernie. Driving that direction isn’t actually much longer, it means less familiar terrain, and we could try for some last minute border photography.

In the end we parked near the bottom of Galton Pass, within 5km of the US border, and saw: 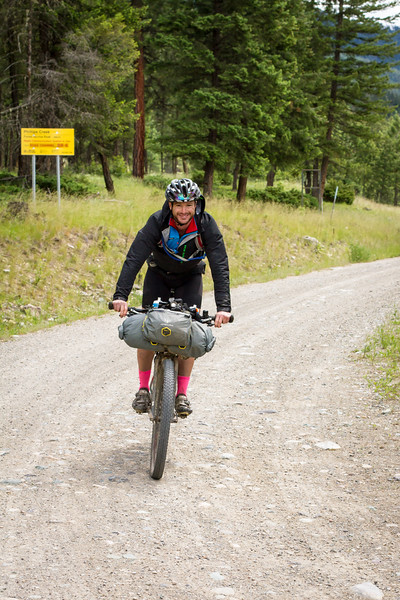 Of the five of them who had camped together near Butt’s Cabin on Saturday night, only Alex and Colleen made it to Antelope Wells.

There our adventure was over, and Finn and I returned to Canmore to become dot-watchers for the coming weeks. If I’d had passports with us I’d have been very tempted to keep driving – the energy of the race, and the racers, is infectious. It’s easy to get drawn into and want to be a part of it, even if I can’t ride right now. Instead I became an official stalker of all the Canadian riders, writing race summaries every few days to post to the Bikepack Canada facebook page.

Alex finished in about 24 days, averaging just over 180km/day. Every day. In mud and heat and vicious hike-a-bike. But he can tell that story.