I woke slowly at dawn, lying there listening to podcasts and waiting for the sun to come up above the mountains before peeking out of my bivy to see everything was covered in frost. So it was cold!

I hopped up and found somewhere to lie my sleeping bag and bivy out in the sun, letting them dry a little at least.

When I set off from Canmore I hadn’t been entirely sure where I’d go, or how far I’d be able to get. Wildfires were still burning, narrowing my options. My body was unreliable, also narrowing my options. But I’d started to settle on the idea of trying to ride the Alberta Rockies 700 route down to the Crowsnest Area, then attempting a proposed connector through to Fernie.

There seemed to be a lot of uphill as I pedalled slowly towards Highwood Pass. Far more uphill than I remember there being. I was passed by other cyclists, and by tourists in RVs who stopped to tell me about the bighorn sheep. I nodded and looked suitably amazed; they seemed thrilled, so who was I to be a curmudgeon who has seen plenty of sheep before. 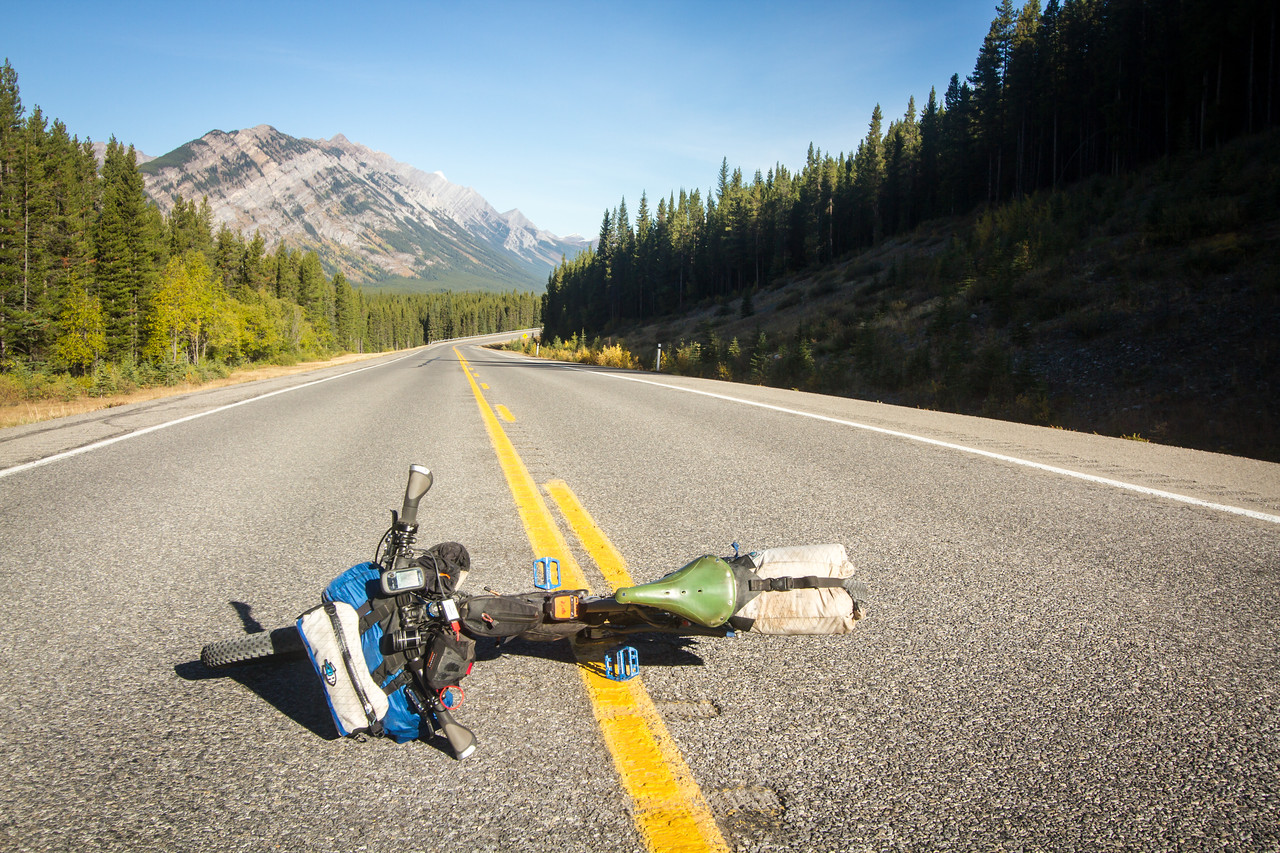 And so I rode on, up and up and up, concentrating on pedalling slowly, keeping my heartrate as low as I could. I was in my lowest gear, which on my Triton is really very low – so low that I remember someone on the internet once being amazed that anyone would want gearing that low, and how could anyone even keep the bike upright at such a slow speed.

I was stopping every now and again to remove more layers – the sky was blue and the day was warming as the the sun and I both climbed higher.

And then, the pass! The only other time I’d ridden up here was during the Highwood Pass Granfondo with Greg and Allan. I remember zooming off on them, and then having to wait around at the top of the pass wondering why they were taking so long. Today it was me who took forever to get here.

I found a patch of grass by the side of the road between the pass and the busy trailhead, laid out my sleeping gear on bushes-that-weren’t-gorse-bushes to dry, and settled down to have some lunch. And then do some watercolour sketching. And have a bit of a nap – lying in the gloriously warm sun was lovely.

I was mostly out of sight, but could listen to people setting out on hikes, and to the trail running guys who came across a bear suddenly as they descended on their trail, and then started bear yelling like crazy.

Eventually my sleeping gear was dry, I was fed and well-rested… time to descend! Wow, cruising downhill on a bike is fun.

After the dramatic snowy peaks near the pass, the mountains were becoming more rounded and grassy and it was feeling more front-rangey and Brokeback-Mountainy. There were cattle all over the shoulder, there were horses about, and the ratio of trucks to Subarus at trailheads was shifting dramatically.

At the junction where the 40 turns south and becomes a gravel logging road is Highwood House. I arrived to find it closed – I hadn’t really expected it to be open, but hadn’t actually checked to confirm either way. Still, it was a missed opportunity for potential icecream. I thought momentarily about riding straight east to try and find icecream sooner, before coming to the conclusion it probably wasn’t worth it. Besides, I wasn’t even sure if east was the best way to go for the closest icecream – maybe there’s an app for that.

I hauled my bike under the closed gate, and had a look at Highwood House – the most notable thing was the vast number of flies covering the walls. They rose up in great clouds when I went too near them. Was the whole building filled with dead bodies? Why on earth were there so many flies? I retreated to a patch of grass near the gate and snacked.

While I was resting in the shade, a man came with a truck, and I talked to my third person for the day. I was enjoying not having any connection to the outside world, and although I chatted for the sake of not seeming like a crazy person who he should report to the police for being highly suspicious, I would have been just as happy not to have any human interaction. Sometimes it’s nice to be a hermit for a while.

Onwards. The road south was dusty, but fairly quiet. People were sometimes considerate, sometimes oblivious to my presence. Oh how it climbed though! I gave up my vague hopes of getting further than Cataract Creek, and stuck to hoping I could make it as far as that (oh, and the above photo is looking back at the climb I’d been doing, it wasn’t a lovely descent).

On arrival, I found the Cataract Creek campground was closed for the season, but there was a picnic area with bins, a picnic table, and enormous shelter and washrooms.

The huge shelter had liberal scatterings of rodent poop, which made an easy decision to utilise the washroom (aka backcountry Hilton) as my bedroom for the night.

As I sat on the picnic table by the creek, I managed to both burn and under-rehydrate my vegetarian lasagna meal. Oh well, at least the views were good. No-one had driven past on the road since I’d arrived, and I wondered how far away the next human being was. It’s not often that I’m that far from another person.

The sun sank, and the half moon travelled the sky, and I twitched at noises in the undergrowth, bear spray at the ready.

Settling in for an early night in the washroom, I wheeled in my bike, set up my bivy and got comfy. It was quite commodious and didn’t smell at all. I curled up in my sleeping bag and listened to the audiobook of Patti Smith’s Just Kids (I don’t often read autobiographies, I’m more of a novel person, but this trip was the exception that proves the rule).

As I was drifting off to sleep though, I heard a rustling in the dark.

I sat up and traced my headlamp around the room. A small mouse with big eyes sheepishly descended my bike, and squeezed out and under the bathroom door. He didn’t return. I stared at the stars through the skylight, and pulled my bivy over me as the night got colder.