Getting out on a family bikepacking trip is one of those things that we kept meaning to do, but somehow we had nearly run out of summer weekends and it still hadn’t happened.

We’d initially been thinking of riding the Elbow Loop. Or maybe just going out and back on the north-west side. But our attempts to book a campground failed. Curse you, Alberta Parks with your “oh, sure, we have sites available” website, but then when they get back to you 48 hours after you tried to book online it turns out that there are indeed no sites.

Contemplating alternatives, we realised I was supposed to be back in town by 3 or 4pm on Sunday afternoon, so it would be better to stay close to home. And so Lake Minnewanka it was. Especially as there was a whole lot of camping availability out there – for some reason K-Country was packed, but the lovely LM8 campground on the shores of Minnewanka was fully available on Friday. We ended up sharing it with one other couple. It was amazingly deserted out there. 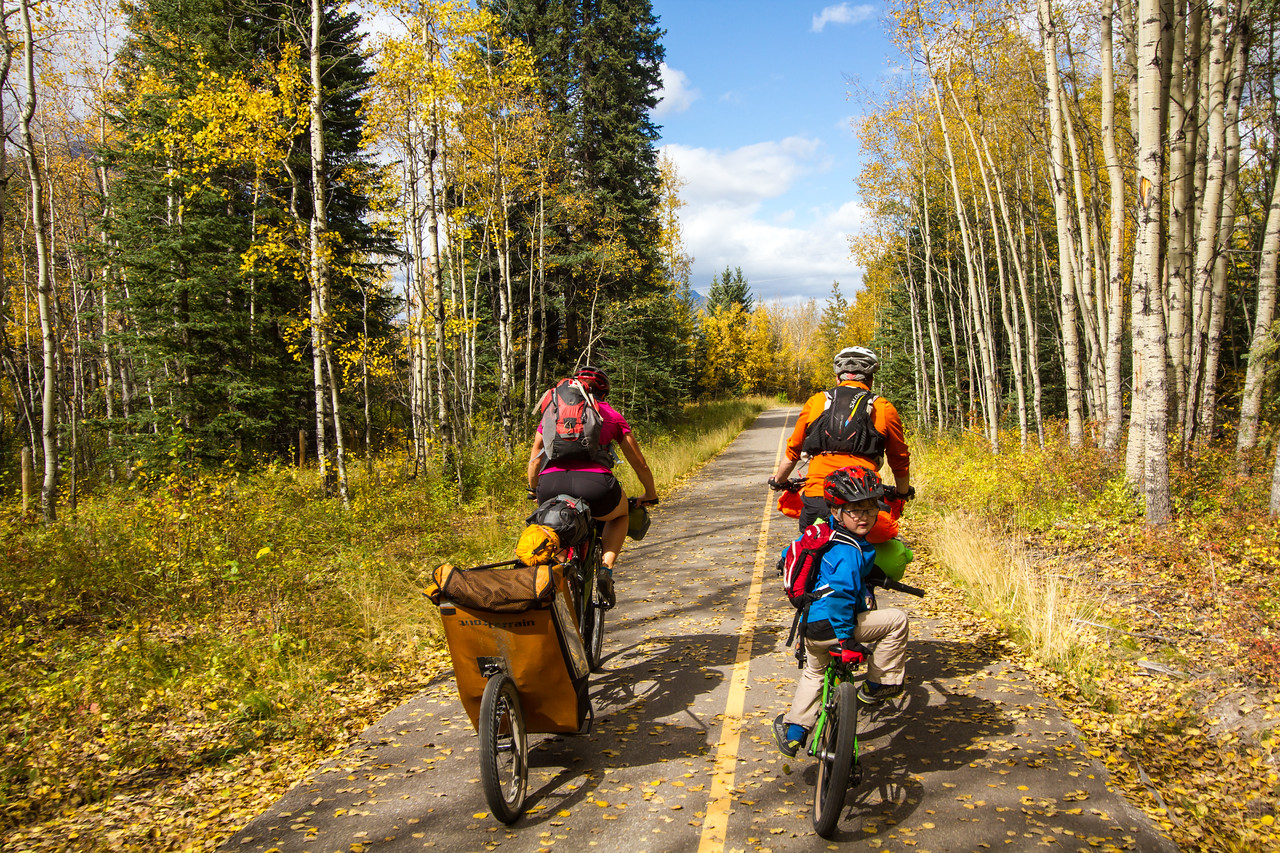 We convinced our friends Kat and Mike that they should come along on their first bikepacking trip too, which meant a lot of borrowing gear and working out how on earth to fit everything into such a small space when you’re used to panniers or hiking packs. It took a little while, but they sorted it!

A lazy start meant that we decided to head out on the Legacy Trail rather than Goat Creek. The downside was that we had no justifiable reason to stop at the Wildflour Bakery in Banff. But at least it was fast and easy going, and plenty of chances to work on fine tuning gear setup.

With a three and a six year old along, we made regular stops along the way for them to get out and play. And for snacks.

We made it onto the Lake Minnewanka trail in the mid-afternoon. This was our family setup above – pretty similar to our Scotland trip last summer.

Getting up The Hill before you start heading north along the lakeshore always warms you up. And sometimes, just sometimes, loaded bikes and towing kids means you just can’t ride everything.

But while Alex kicked the boy off the trail-a-bike, the boy discovered the joys of poking puff balls with a stick. 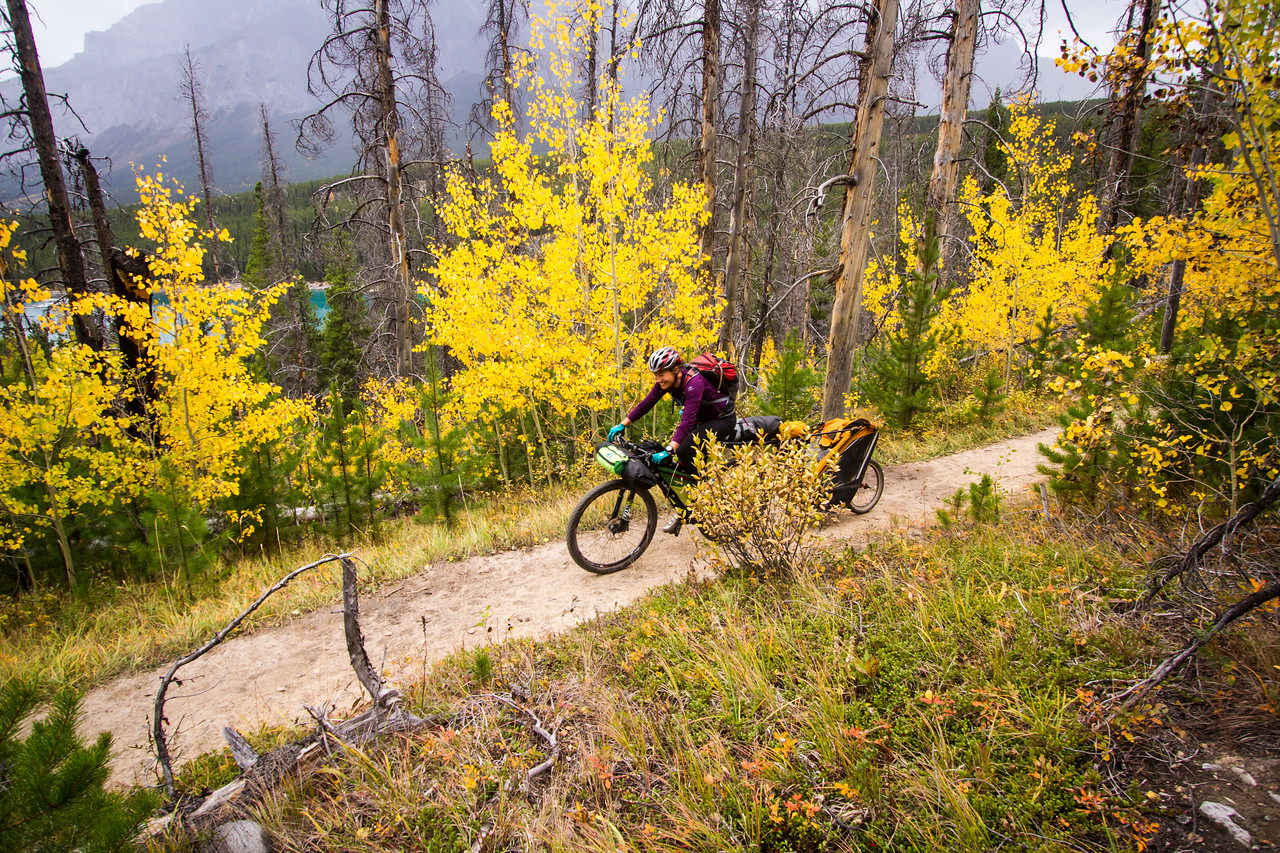 Then it was just scenic lakeside singletrack, through golden aspens and alongside the turquoise lake. 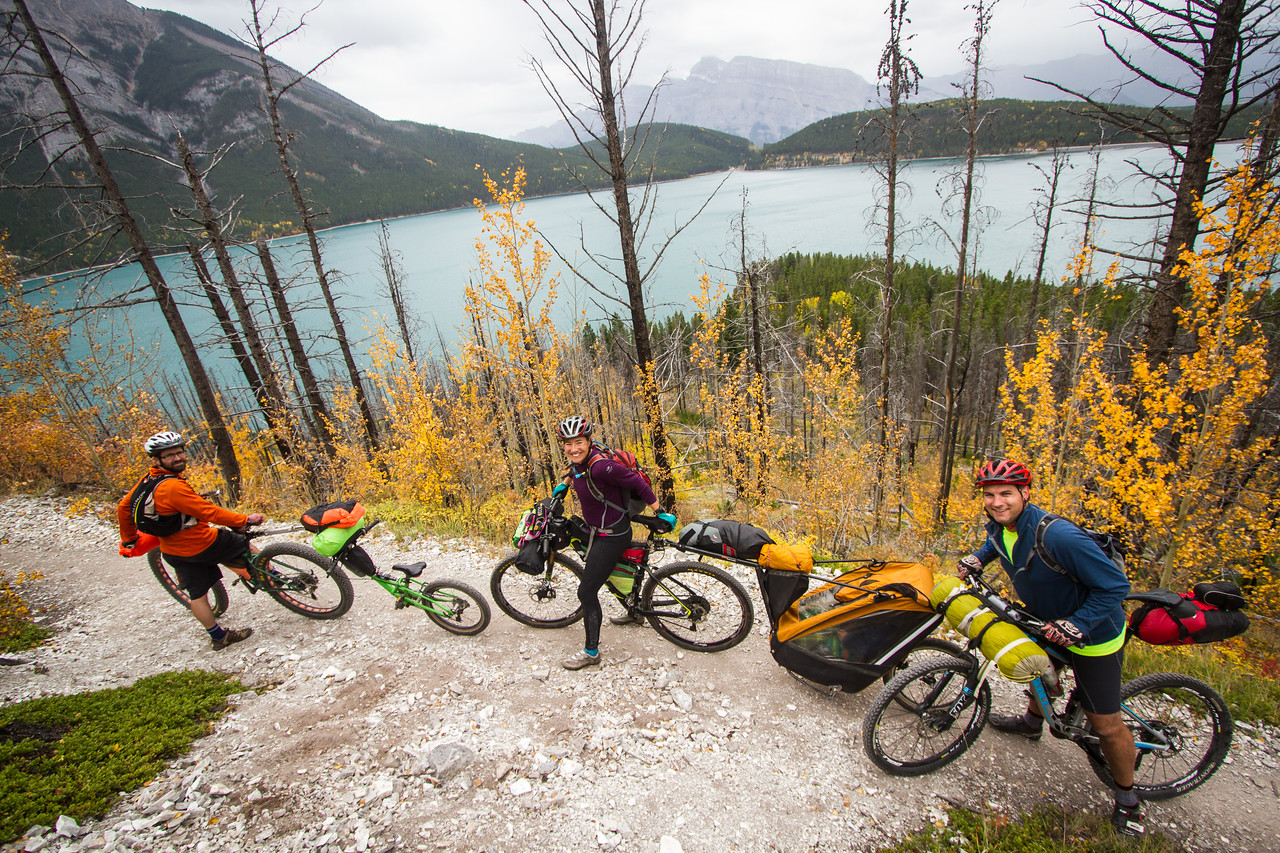 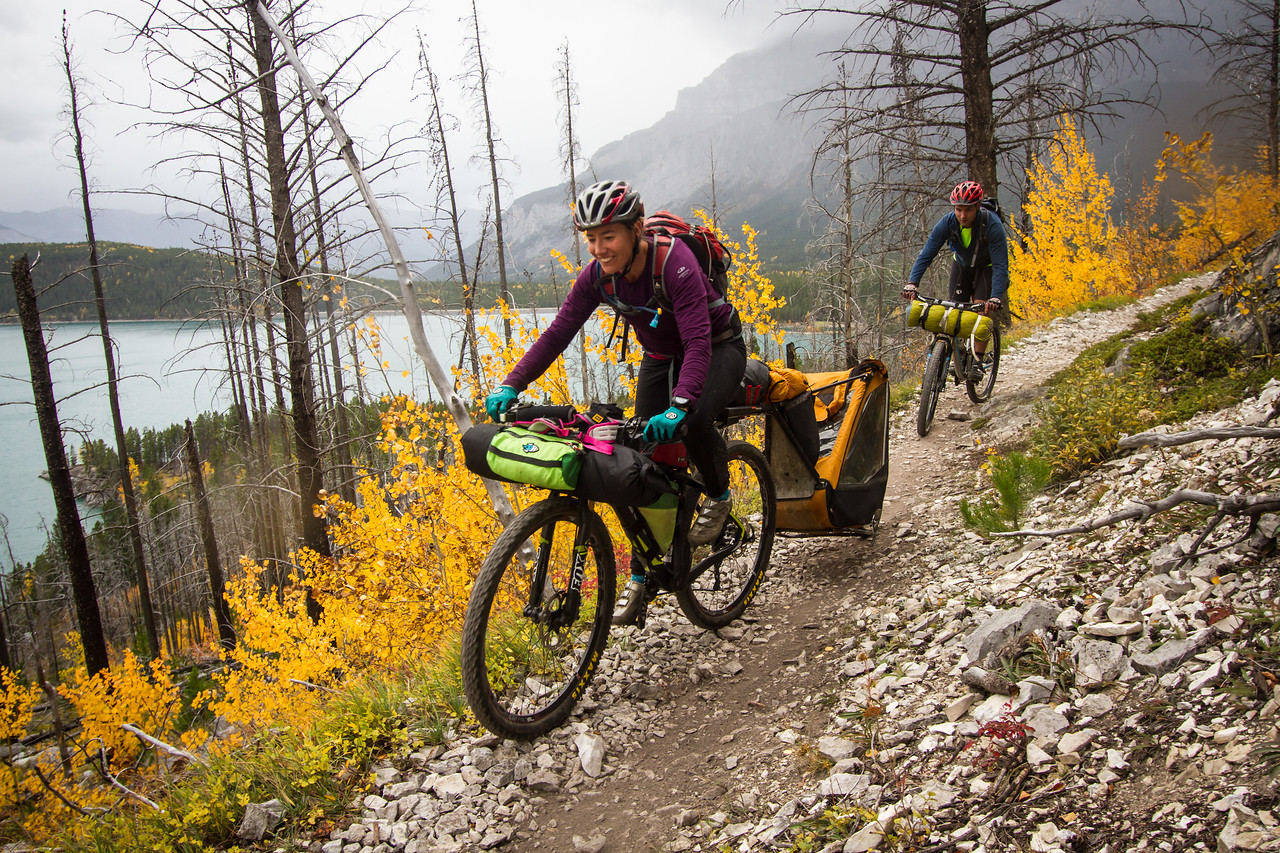 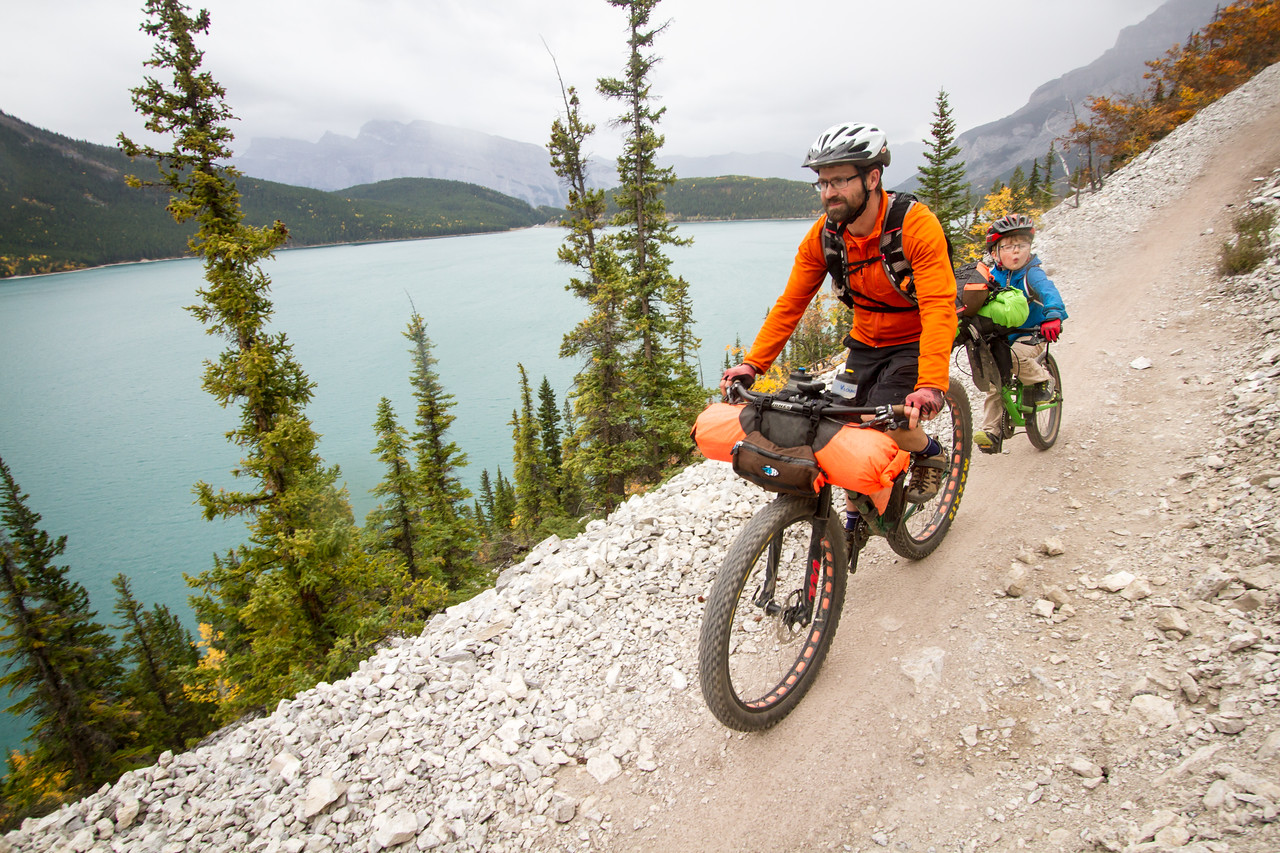 It’s only an eight kilometre ride in to the LM8 campground (unsurprisingly, if you think about it). As we hit the bridge just before the campground, the kids hopped out and ran the rest of the way to camp. 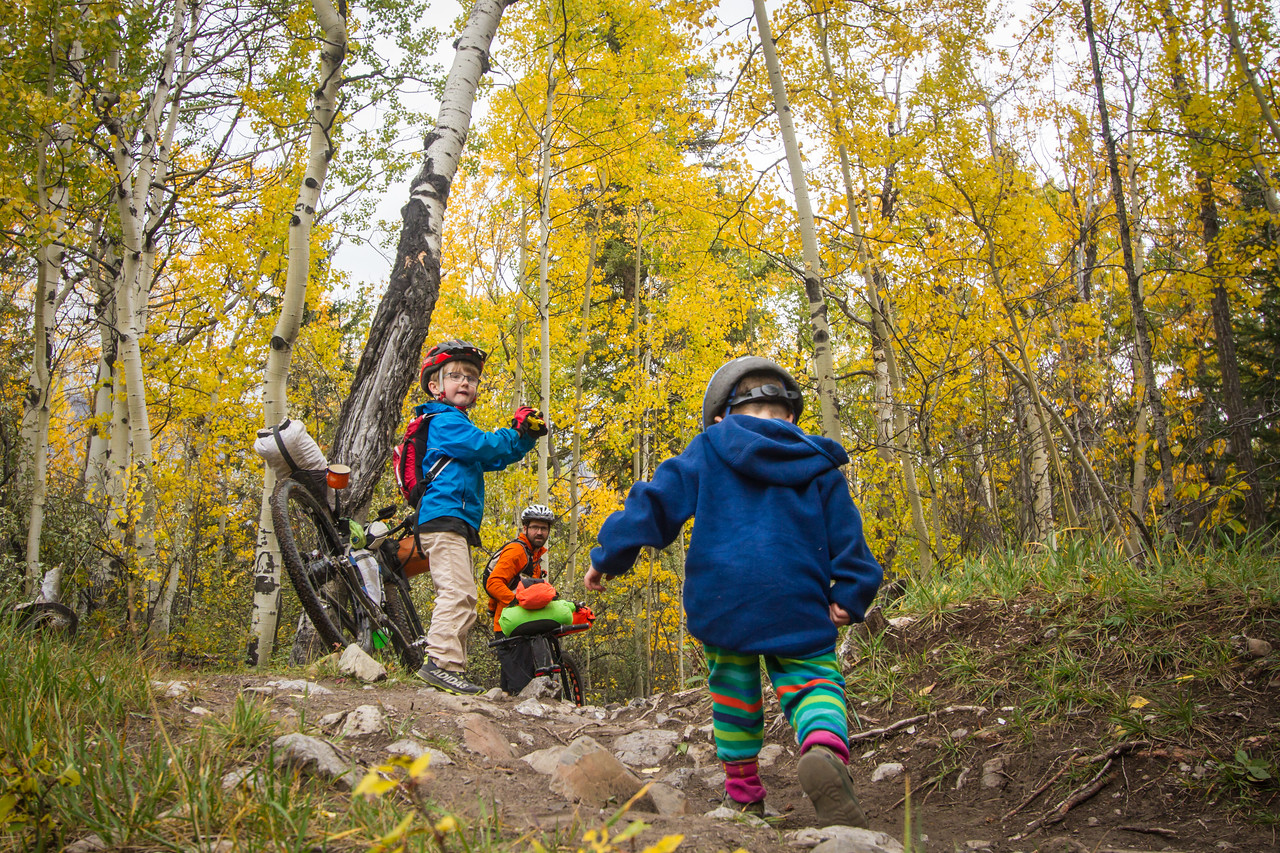 There were so many deers hanging around! Fairly oblivious to us, they wandered around and did their thing, and had me jump out of my skin a couple of times when one wandered up unexpectedly close.

Collecting water from the lake was more challenging than usual. The camping pads were quite sheltered, but the cooking area was further south and thoroughly exposed to the wind. A nice series of waves was rolling onto the stony shore, and a few of us received an accidental foot soaking.

Cooking dinner in the trees, thankfully we had a shelter at our cooking spot.

We all curled up in bed pretty early. I was testing out how the boy would go in a full-sized sleeping bag for the first time, after realising his kid bag was just no longer big enough (or warm enough for shoulder season adventures). The end result was – he was super snug and warm in my 15 year old down bag, and I might see if I can adjust it a little so it’s a bit shorter/lighter/smaller, and he’ll probably be able to get at least five more years of use out of it (depending how fast he grows).

Morning light is gorgeous on the aspens. We slept in until 8 or so, and then eventually gave in and got up for breakfast.

There’s been so much going on before the trip that food had been thoroughly disorganised. Breakfast was mostly pastries that we’d picked up the day before from Le Fournil Bakery in Canmore. Delicious tasty pastries.

The boys enjoyed hanging out some more, and playing in the forest.

And then we got things packed up again, ready to hit the trail before it became too busy.

It was a beautiful ride out, and it felt much easier than the day before – even the hill climb!

Although – sometimes it’s just so steep you have to push. But the trail has recently had some work done on it, and the section on the hill that used to be loose and rocky and pretty interesting to ride… well now it’s flat and hardpacked soil, and far easier. 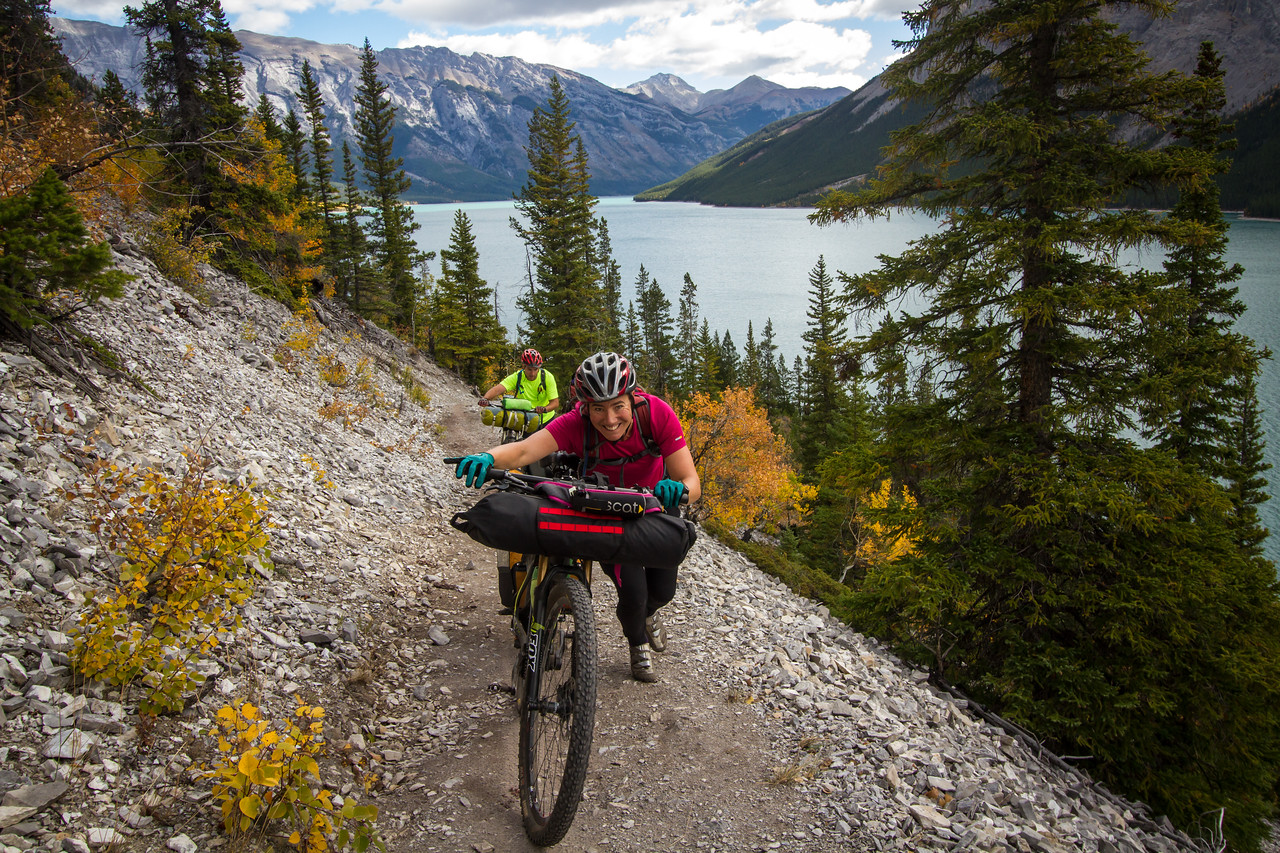 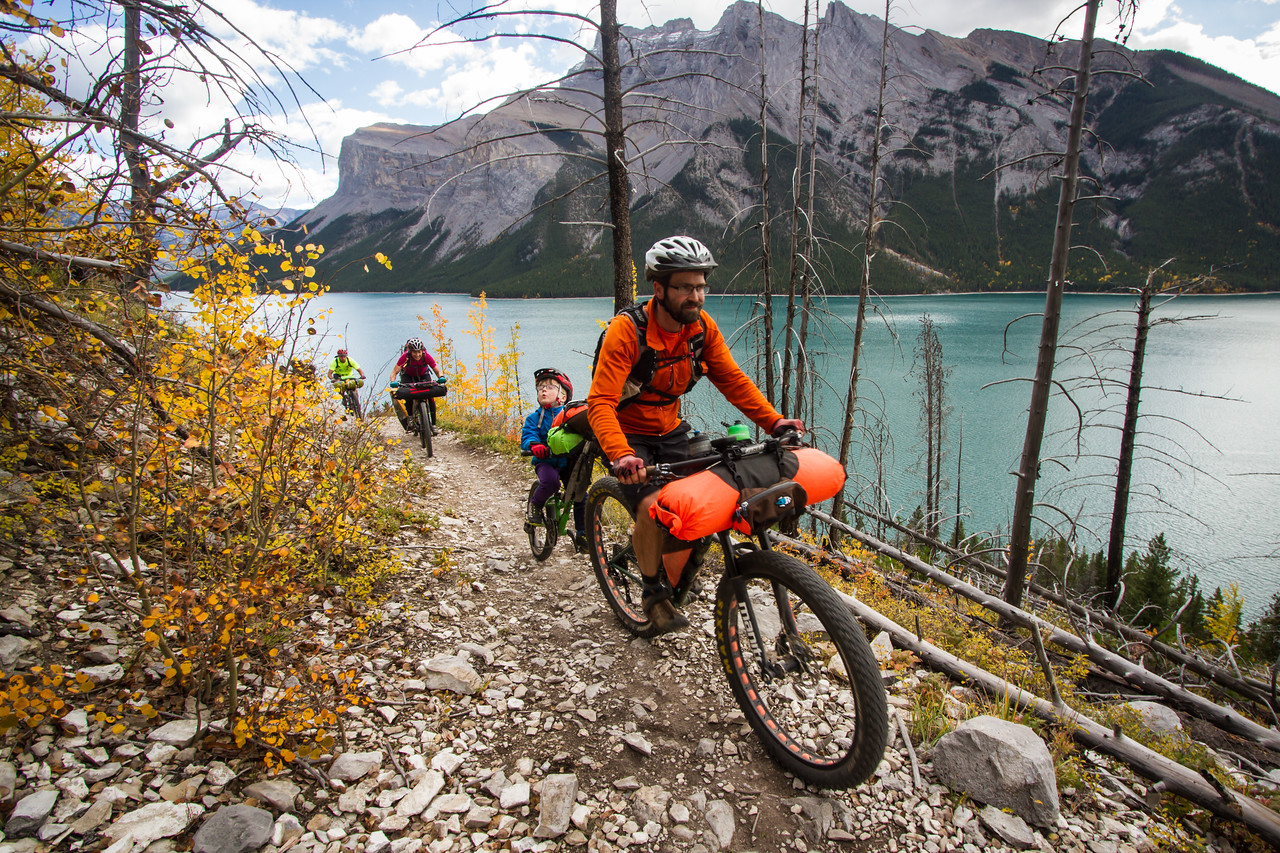 Just after we got the group shot below, some tourists came up to get their photos taken with the crazy group of bike people (and were thoroughly startled when they realised that the trailer had a child inside it).

After this, it was a tail-wind home on the Legacy Trail.

Bikepacking trips sometimes seem to require a lot of effort, but are thoroughly worth it, and so much fun once you’re out there pedalling and camping!

Route: From Canmore, along the Legacy Trail, via Cascade Ponds, on the road to Lake Minnewanka, then along singletrack to LM8 campground
Distance: 35km one-way
Elevation gain: ~400m on the way there, ~200m on the way back